As the crypto world reels from the FTX currency exchange's bankruptcy, how can the industry protect the cryptocurrency market? 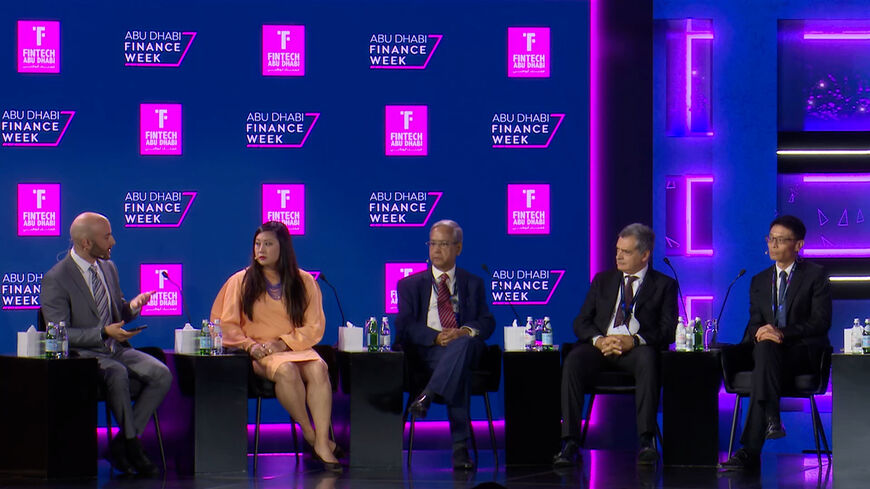 Al-Monitor business correspondent Salim A. Essaid moderates a panel with global regulators from the United States, India, Italy and the UAE at Abu Dhabi Finance Week on Nov. 15, 2022. - Greg Cohen/Al-Monitor

ABU DHABI — Amid the aftershocks of the FTX currency exchange's bankruptcy last week, investors and economists are trying to figure out where they should point to for what Reuters called the “at least $1 billion”  loss of client funds that have put into question the viability of the cryptocurrency market.

Is it the fault of the quick-to-rise crypto exchanges that offer potentially high asset gains but inadequate security? Or are regulators to blame? Is the technology that supports the crypto market flawed to begin with?

These were some of the questions brought up at Abu Dhabi Finance Week, which wrapped up today and earlier in the week saw Binance CEO Changpeng Zhao taking heat from audience members and speakers about the future of crypto.

The CEO of the largest infrastructure provider in the global $1 trillion crypto industry assured audiences that crypto will be fine and doesn’t need saving. Yet event speakers such as outspoken Atlas Capital chief economist Nouriel Roubini described Zhao and the greater crypto industry as “concealed, corrupt, crooks, criminals, conmen” and more.

The crypto market was valued at $2.9 trillion at its peak this month last year, according to Binance Holdings subsidiary CoinMarketCap, but now and after the FTX bankruptcy, it has lost about two-thirds of its value, reaching around $1.7 trillion.

In the case of FTX, which has put this issue in focus, some say the fault lies predominantly with business practices.

“The FTX situation stems from financial fraud rather than a blockchain or crypto-specific failure,” according to the New-York-based blockchain analysis firm Chainalysis, which says that crypto investors are putting their digital money where their trust is. Its research found that the rate of users cashing out of crypto has reverted back to pre-FTW crisis levels. Yet while the majority of deposits are in centralized crypto exchanges, this rate has been decreasing over the past month.

“We’ve also seen spikes in funds sent to personal wallets for safekeeping,” wrote Chainalysis in its Twitter breakdown of the FTX collapse.

Users adopting decentralized exchange (DEX), or peer-to-peer trading, instead of relying on holdings and transactions entrusted to centralized banks or exchanges.

“Many have reported huge spikes in DEX trading volumes in what’s being framed as an embrace of self-custody,” explained the blockchain analysis firm.

This pulling away from exchanges is not a good sign for regulators, who juggle the difficult role of protecting investors and preserving financial stability while also maintaining the attractiveness of the crypto asset sector and other financial innovations.

If the responsibility lies with regulators, how can they create effective and experience-based rules for financial innovations that haven’t been tested?

This question was posed by Al-Monitor to a group of key global regulators during a panel discussion at Abu Dhabi Finance Week.

It “seems like an oxymoron and it’s always a challenge for us to manage,” said Wai Lum Kwok, the senior executive director of authorization within the Financial Services Regulatory Agency of the Abu Dhabi Global Market.

He said the solution lies in testing and collaborating early with the necessary talent and without real risk, which the UAE capital did in 2016 with its regulatory sandbox. This contained space allows financial institutions and government regulators to test out theories, see their impact and still avoid risk while also keeping the cost of innovation down and reducing the barrier to entry for new innovations.

In neighboring emirate Dubai, FTX received a full license to operate as a crypto exchange in July and on Wednesday in Abu Dhabi, Binance said it secured financial services permission, a license to provide custody services to professional clients, in the emirate’s financial free zone.

“The kind of innovation that we’re seeing in this region might not be what other jurisdictions are facing, and I think we have made a strong start despite the recent turbulence in the sector,” said Kwok, whose market was one of the first globally to establish its crypto asset framework in 2018.

He said that while the crypto winter has temporarily dented the appetite of financial institutions, ADGM’s sandbox is attracting gaming industry players who are interested in the financial sector and is testing decentralized finance and Internet of Things solutions to improve the security of crypto contracts and transactions.

Some countries represented at the panel expressed the need for a more conservative regulatory approach.

“People are allowed to do trading or have a deal, but the banks have not been permitted as of now to deal with crypto assets,” said Upendra Kumar Senha, the former chair of the Securities Exchange Board of India, who said his country is more focused on fintech that benefits the greater public and will wait to see how crypto plays out.

In the United States, the debate about whether crypto is a security or a commodity has been ongoing, with classifying it and its regulation remaining a key topic among legislators.

“We have to ensure that these crypto financial activities are brought within the regulatory perimeter so that they are held to the same standards as other financial firms. This is, I think, a critical point,” said Caroline Pham, commissioner of the US Commodity Futures Trading Commission.

“When we are in a framework of global markets, the risk cannot be contained within any one particular jurisdiction,” she told Al-Monitor and the rest of the audience onstage, claiming that this debate is not hindering the process of financial innovation but rather ensuring its viability to avoid financial travesties like the case of FTX.

The US Justice Department is currently investigating Binance for possible money laundering, according to Reuters.

Pham said that with its approach, the United States has effectively unlocked American innovation. She added, “If you think about Fintech more broadly, we have the deepest and most liquid equity markets in the world. So I do think that the US system works but in an election year, there’s a lot of debate, of course.”

In his 32 tweet play-by-play of what happened, the former FTX CEO Sam Bankman-Fried expressed that dealing with regulatory structures can be frustrating and ineffective.

“A huge amount of work — much of it arbitrary — and relatively little consumer protection,” wrote Bankman-Fried. He also acknowledged, “It’s really hard to be a regulator. They have an impossible job: to regulate entire industries that grow faster than their mandate allows them to.”

Regulators are unable to police as well as they ideally would, added the former CEO. He ended the chain of tweets by writing that now he plans to do "what matters": doing right by the FTX customers whose finances have plummeted along with the value of the crypto market.