Over 100 Iranian artists reportedly detained, banned after siding with protests

The Iranian Alliance of Motion Picture Guilds has expressed serious concern over the persecution of dissident artists in the wake of unprecedented nationwide protests in Iran. 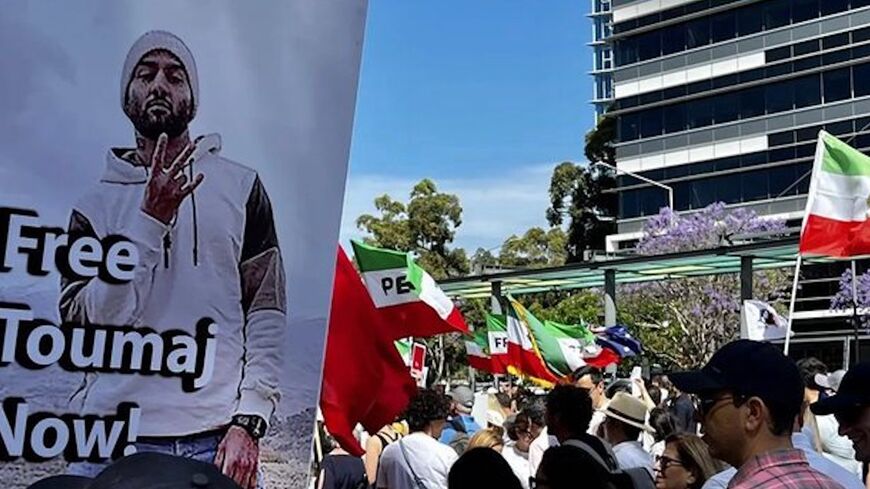 Iranians call for the release of rapper Toomaj Salehi who was arrested on Oct. 30, 2022. - Twitter

Iran’s main motion picture association, publicly known as the House of Cinema, has compiled a list of more than 100 media personalities, including cinema, theater and music artists, who have been detained, banned from working or leaving the country, and deprived of their ongoing contracts due to online activities in support of protests or personally joining the rallies.

Speaking to the Iranian Reformist daily, Shargh, two members of the House of Cinema elaborated on the findings by a committee set up within the House of Cinema in the wake of nationwide protests. The panel is tasked with following up on the situation of artists affected by the ongoing crackdown in Iran. It also provides them with judicial, legal and financial support.

“By now, a large number of renowned filmmakers, actors and actresses are prohibited from leaving Iran,” Alireza Hosseini told Shargh. He emphasized that to protect the rights of the affected artists, especially the detainees, the committee is not authorized to release the names and details.

“Out of the 100 people on the list, nearly 10 are filmmakers tangled with courts due to their overseas travels and participation in workshops even before the start of the protests. Another 26 are members of the Theater Forum and the Music Forum,” he said while roughly breaking down the list. “Six artists from the list are accused of signing statements, while the rest are young scriptwriters, cinematographer assistants, short-film makers and documentarians.”

The names of 11 artists, including poets and translators, can be seen on a list published by the Iranian Writers Association in early November. All of them have been arrested since mid-September.

“Our expectation is that the detainees be pardoned and released,” demanded Hosseini, who called all of them “the children belonging to one home and one country.”

Some prominent artists, including internationally renowned filmmakers Mohammad Rasoulof and Jafar Panahi, were already in prison when the protests broke out. They were arrested in June and July 2022, respectively, after signing a statement that urged security forces to “lay down their arms” in dealing with protesters. It specifically referred to the brutal crackdown in the aftermath of a building collapse in southern Iran in May 2022.

House of Cinema committee member Mehdi Kouhian believes the number of artists banned from working is probably higher than what has been verified so far. “There might be more banned artists that we don’t know of yet … we know that some contracts have been canceled.”

Recently, leading Iranian actress Taraneh Alidoosti posed without mandatory hijab in a picture on her Instagram as she held a sign reading “Woman, Life, Freedom” in the Kurdish language. The phrase, which originates from Kurdish regions, is the main slogan being chanted by the protesters in Iran.

Alidoosti is one of the last female artists to have joined a campaign against compulsory hijab that started online after the death of Mahsa Amini. The Kurdish woman was taken to the police center for having an “improper” hijab.

Faced with a growing wave of female artists removing headscarves, Culture and Islamic Guidance Minister of Iran Mohammad Mehdi Esmaeeli in September warned those who do not wish to obey the laws of the Islamic Republic are “free to choose another profession.” The comment was interpreted as an unofficial ban on the continued professional career of any defiant actress.

In response, actress Katayoun Riahi addressed the minister on her Instagram by saying “you better find yourself an honorable profession.” Riahi was the first actress who appeared without a hijab in a televised interview with the UK-based Farsi news channel Iran International from Tehran just two days after the death of Mahsa Amini. Riahi’s house was reportedly raided after that interview, but she evaded arrest. Her official Instagram page posted that an arrest warrant had been issued for her.

After over two months of living in hiding, Riahi was captured in near the northwest city of Qazvin on Nov. 20, reported semi-official Tasnim news agency, which is close to the Islamic Revolutionary Guards Corps.

“Despite knowing what would befall them, a growing number of artists are speaking out by the day,” an Iranian director who asked to remain unnamed for security reasons told Al-Monitor. “My prediction is that the list of persecuted artists would grow in number since the government is showing no sign of compromise.”