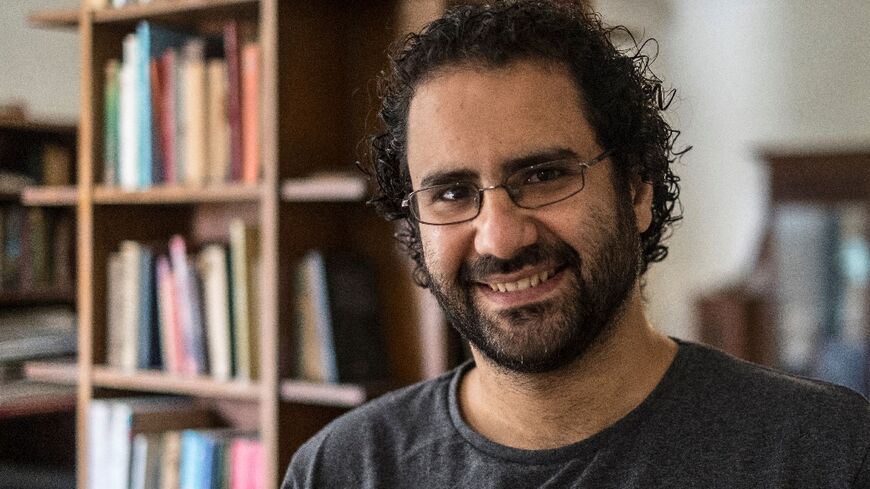 Egyptian activist Alaa Abdel Fattah, now in jail and on a hunger and water strike, pictured at his home in Cairo in 2019 - Khaled DESOUKI
Agence France-Presse
November 13, 2022 — Cairo (AFP)

The lawyer for Egypt's jailed hunger-striker Alaa Abdel Fattah said Sunday he had been denied access to his client for a second time in days, as fears for the activist's health mount.

Seven months into a hunger strike, Abdel Fattah began refusing water on November 6 as world leaders arrived in the Egyptian resort of Sharm el-Sheikh for the COP27 climate summit.

A key figure in the 2011 uprising that toppled longtime dictator Hosni Mubarak, he is serving a five-year prison sentence for "spreading false news" by sharing a Facebook post about police brutality.

His family say they fear for his life, and have made months-long appeals to the international community, particularly Britain, where Abdel Fattah gained citizenship this year from behind bars through his British-born mother.

His lawyer Khaled Ali, a former presidential candidate, had previously been denied access on Thursday, after prison authorities said his permit was invalid because it was dated the day before. Such passes generally have validity for "one week", he said.

On Sunday, Ali said he received another permit to visit, but was blocked again.

"I picked up the permit from the public prosecutor's office in Cairo at 3:00 pm (1300 GMT), and I went as quickly as possible" to the prison, he said on Facebook.

He arrived at Wadi al-Natroun prison, about 100 kilometres (60 miles) northwest of Cairo, at around 4:45 pm, and was allowed inside and made to wait.

But an hour later, an officer informed him that "the prison was closed", Ali added.

Abdel Fattah was a key figure in Egypt's Arab Spring uprising more than a decade ago. He began consuming "only 100 calories a day" in April, his family said, to protest the conditions he and about 60,000 other political prisoners face in the country.

Some world leaders have raised his case with Egyptian President Abdel Fattah al-Sisi in bilateral meetings during the climate talks.

His sister Sanaa Seif was heckled by pro-government attendees at two press conferences this week, who called her brother a "criminal", not a "political prisoner".

On Friday, his other sister, Mona Seif, submitted a pardon request.

The plea was picked up by one of Egypt's most watched talk show hosts, the ardently pro-Sisi Amr Adib.

On prime time television Friday, Adib said the pardon would be in "the interest of Egypt first and foremost".