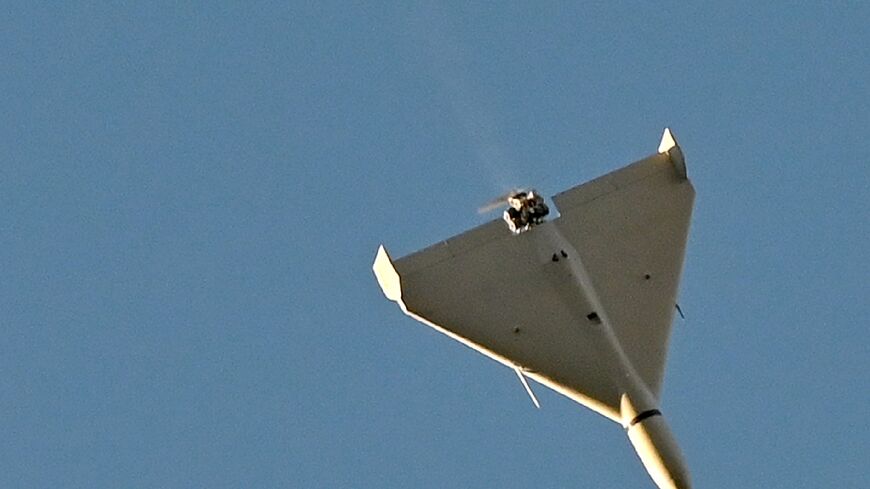 The United States has denounced as 'appalling' Russia's use of Iranian drones of Kyiv and other cities were shaken by recent attacks - Sergei SUPINSKY
by Didier LAURAS
November 3, 2022 — Paris (AFP)

Iran stands accused by Western powers of supplying drones to Russia for its war against Ukraine, with analysts saying such military cooperation is of immense interest for Tehran at a delicate moment for its theocratic leadership.

The United States has denounced as "appalling" Russia's use of Iranian drones after residents of Kyiv and other cites were shaken by a spate of recent attacks.

Ukraine has said around 400 Iranian drones have already been used against the civilian population of Ukraine, and Moscow has ordered around 2,000. Tehran has rejected the allegations.

Iran and Russia, both former imperial powers who for centuries vied for domination of the Caspian Sea region, have long had a highly nuanced and delicate relationship marked by rivalry and cooperation.

Winning Russia as a close ally is all the more attractive for Iran's leadership as it faces unprecedented protests at home, while it can count on Moscow to turn a blind eye to any crackdown.

But Russia using Iranian drones against Ukraine would mark a key milestone in cooperation, to some extent countering Turkey's supply of highly effective drones to Kyiv which has irritated Moscow.

"Iran could very well see the use of its drones against Ukraine -- backed by the US and NATO -- as a way to strike at the West in its own backyard," said Eric Brewer, director of the Washington-based Nuclear Threat Initiative's Nuclear Materials Security Program.

"Iran may view the destruction wrought by its drones in Ukraine as a reminder and warning to the US, Israel, and Gulf states about what Iran could do should they ever strike."

He added, "It is a great advertisement for Iranian drones and military hardware for future customers."

The People's Mujahedin of Iran (MEK), an Iranian opposition group outlawed in Iran, alleged that Tehran had a sale contract to Russia to supply various offensive drones, including Shahid 129, Mohajer 6 and suicide drones Shahid 136 and Shahid 131.

"Drone shipments are sent weekly by Russian military cargo planes," the MEK said in a report.

The planes land at Tehran's Mehrabad airport and are then moved to the adjacent Qadr military base of the Iranian Revolutionary Guards (IRGC) to be loaded with drones.

It alleged that before President Vladimir Putin's trip to Tehran in July 2022, the military planes that had transported the black SUVs of Putin's entourage returned to Russia with the drone cargo.

AFP was unable to immediately verify the claims in the report.

Colin Clarke, Director of Research at the Soufan Group, a private intelligence and security consultancy, told AFP that "details and an exact status of a major Russian sale of combat systems to Iran is not known at this time."

He said until Russia's invasion of Ukraine, Moscow had wanted to "appear cooperative" with international efforts to revive the 2015 deal on the Iranian nuclear deal and persuade Tehran to return to the accord.

He said Moscow did complete a sale to Iran of its S-300 air defence system with delivery in 2016. "But no new tanks, combat aircraft, ships, or other major combat systems have been sold by Moscow to Tehran since," he said.

White House national security spokesman John Kirby said he would not confirm reports that Tehran could also send short-range ballistic missiles to Russia but was "concerned about the potential" of Iran to provide Russia with surface-to-surface missiles.

The cooperation could work both ways too: reports in September suggested that Iran was interested in buying Russian Sukhoi-35 fighter jets in what would be a logical step given the ramshackle state of its own air force.

"The Iranian army is in a pathetic state", said Pierre Razoux, academic director of the Mediterranean Foundation for Strategic Studies (FMES).

He said some of the hardware was half a century old and had gone through the Iran-Iraq war. The army had to modernise but was restricted due to sanctions meaning it was "reduced to bartering", he added.

Attention will be acute on such efforts.

Citing Saudi and US officials, The Wall Street Journal on Wednesday reported that Saudi Arabia had shared intelligence with the United States warning of an imminent attack from Iran on targets in the kingdom in a bid to divert attention from the protests.

Ivan Klyszcz, research fellow at the Estonian Foreign Policy Institute, told AFP Iran had decided to "openly side" with Russia as there was no longer any prospect of cooperation with the West.

"In this sense, the risks are low. Integrating further with Russia on economic and military matters could be worth to them more than keeping up the hope of a new deal with the West. And –- given the war –- Russia is happy to oblige."