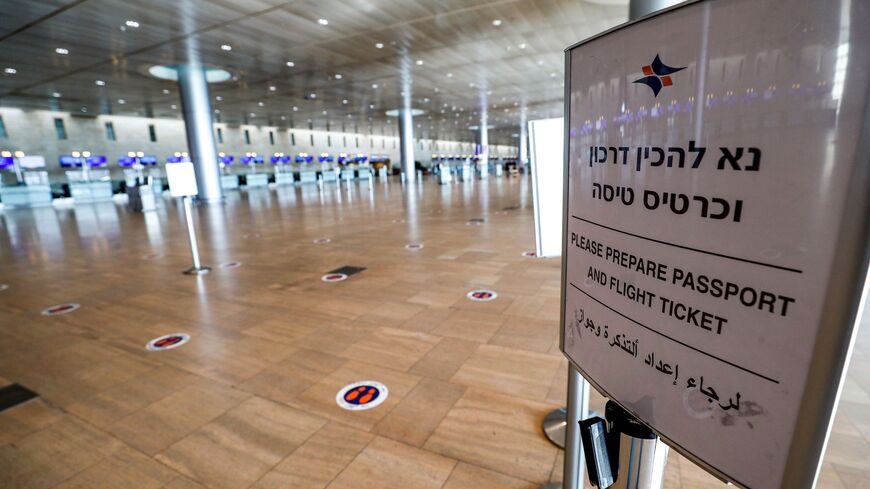 A sign instructs travelers to prepare their passports and flight tickets before checking in at Israel's Ben-Gurion International Airport in Lod, near Tel Aviv, on Jan. 25, 2021. - EMMANUEL DUNAND/AFP via Getty Images

Israel’s Interior Minister Ayelet Shaked has instructed the Population and Immigration Authority to grant entry to couples even if only one spouse is an Israeli national. As of Oct. 11, as they hold a valid Russian marriage certificate, Russian non-Jewish spouses will be admitted into Israel regardless of whether they hold an entry visa.

The new instructions are designed to facilitate the entry of couples fleeing Russian’s recent conscription efforts. Non-Jewish spouses will be allowed to enter Israel as tourist without have to wait months for a visa to be processed. Their children will also be allowed to enter. The spouse will have to deposit a guarantee of a yet undetermined 10,000-30,000 shekels and pledge to leave the country once their three-month tourist visa expires.

Jerusalem is preparing for a possible mass immigration of Russian Jews to Israel. The move follows at least two cases of foreign spouses of Russian Israeli citizens being separated from their partners at the airport and sent back to Russia.

On Oct. 3, immigration authorities at Ben Gurion Airport turned back an Israeli citizen's Russian wife and son. Wheelchair-dependent Yulia Eventova and 13-year-old Benjamin Eventov were sent back to Istanbul, their last stop after fleeing Russia. The man, David Eventov, told the press he had tried to explain to the authorities that his wife has multiple sclerosis, is confined to a wheelchair and needs his daily assistance.

Eventov said that the authorities made the decision to expel his wife and son without listening to him, allowing them to explain their situation or looking at the documents that supported their arguments. Eventov was forced to buy a ticket back to Istanbul. Upon arrival, he discovered that his wife's wheelchair had been left in Tel Aviv.

According to Eventov, who holds dual Russian and Israeli citizenship, their marriage was registered in Russia and their son's birth certificate bears his name. A few years ago, the family started the process for Eventova to immigrate to Israel, but the process was suspended with the coronavirus pandemic.

Another such case took place on Oct. 10. Anastasia Elkin, the wife of Israeli-Russian Daniel Elkin, was separated from her husband upon arrival to Ben Gurion. After several hours in detention, Anastasia was deported to Russia with their seven-month-old baby without the husband being notified that his family had been put on a plane back to Moscow.

Daniel Elkin had immigrated to Israel from Russia in 2012. While serving in the Israel Defense Forces, he was seriously wounded in an accident. After recovering from the injury, Elkin finished his service. A year later, he returned to Russia to be with his parents. Elkin said that the couple was planning for his wife to stay in Israel just for the 12 days it would take to submit the documents needed for a longer stay. He also said that the officials refused to look at the family's documents, including their marriage certificate.

During her term in office, Shaked had championed a hard line against illegal immigration. The new measure came after public pressure following these two cases.