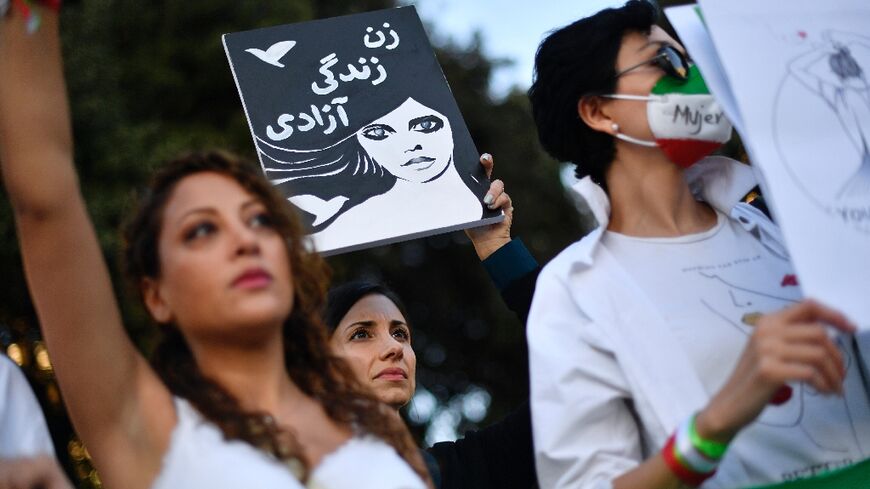 Protests accross Iran, matched by solidarity marches in other countries, erupted in mid-September over the death of Mahsa Amini who had been arrested by the notorious morality police in Tehran - Pau BARRENA
by Stuart WILLIAMS
October 5, 2022 — Paris (AFP)

Concern grew on Wednesday over what caused the death of 16-year-old girl Nika Shahkarami who had joined the protests in Iran, even as the Iranian judiciary rejected accusations she had been killed by security forces.

Reports from Persian media based outside Iran have said that the grieving girl's family were not allowed to bury her body in her hometown, while two close relatives have also reportedly been arrested.

Her aunt Atash Shahkarami wrote on Twitter that Nika went missing after attending a protest in Tehran on September 20.

Ten days later the family were told that she had been found dead.

Protests across Iran, matched by solidarity marches in other countries, erupted in mid-September over the death of Mahsa Amini who had been arrested by the notorious morality police in Tehran

Rights groups say that dozens of people have been killed in a crackdown by the Iranian security forces on the protests.

Media including BBC Persian and Iran Wire have said that Nika's family were permitted to see the body of Nika Shahkarami in a morgue but were not allowed to bury her in their home town of Khorramabad in Lorestan province.

Instead, she was secretly buried by the authorities on October 3, the date which would have marked her 17th birthday, in a village dozens of kilometres away from Khorramabad.

Footage published on social media, including by the New York-based Center for Human Rights in Iran, instead showed the family attending a protest in her memory in Khorramabad with her distraught mother declaring: "Today was your birthday, my dear!... Today I say, congratulations on your martyrdom!"

Images said to show her burial site in the village of Veysian show a dirt grave with a roughly cut headstone.

There are reports Nika Shahkarami had been held in Kahrizak prison outside Tehran but this has not been confirmed by the Iranian authorities. When the family saw her body, her nose had been smashed and skull cracked, reports said.

BBC Persian reported on Monday that an autopsy report by the Behesht-e Zahra cemetery in the area had concluded she died due to multiple injuries sustained by being hit "with a hard object".

An investigation opened Wednesday into Shahkarami's death and eight people have been arrested in connection, according to the official IRNA news agency Tuesday.

But Iran's judiciary on Wednesday rejected any connection between the death of Nika Shahkarami and protests over the death of Mahsa Amini.

An autopsy showed "multiple fractures... in the pelvis, head, upper and lower limbs, arms and legs which indicate that the person was thrown from a height," state news agency IRNA quoted Tehran judiciary official Mohammad Shahriari as saying.

"No bullet marks were found... and the evidence shows that the death was caused by the person being thrown," he said, adding: "The incident has nothing to do with the recent disturbances."

Earlier, Tasnim news agency said eight people who were working in a building near the scene had been arrested in connection with Shahkarami's death.

Norway-based rights group Iran Human Rights (IHR) says at least seven women are among the over 90 people killed by the Iranian security forces in the crackdown on the protests.