Chakaki discussed artificial intelligence’s growth in the Middle East, differences between men and women investors and much more at the Al-Monitor live webinar. 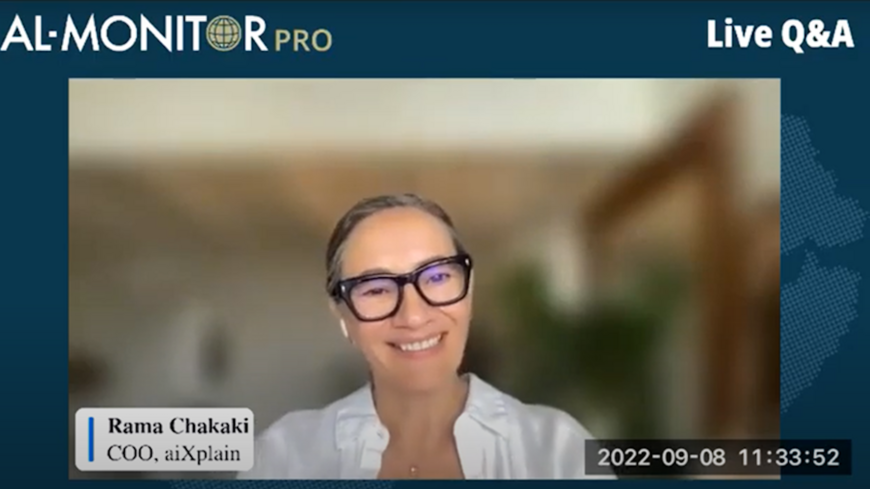 Entrepreneur and influencer Rama Chakaki participated in a live webinar with Al-Monitor PRO Thursday to discuss innovation, artificial intelligence and social impact in the Middle East.

Chakaki is COO of aiXplain inc, a partner at Transform.VC, and the co-founder of VIP.fund. She pointed out that Gulf Cooperation Council (GCC) states have particularly embraced AI.

The United Arab Emirates is “taking initiative” on AI, she said, by training young men and women in the sector.

Earlier this year, the Dubai International Financial Center launched an AI “license,” and the Emirates also has a dedicated AI ministry.

But the sector is not as advanced in other parts of the region.

“The readiness differs from one country to another,” said Chakaki, adding that AI models require “volumes of data” and that “some countries are more advanced at doing that than others.”

GCC states are focused on language AI, such as translation and transcription.

A prominent example is Amazon’s Alexa, she said, and her company aiXplain is working on building automated speech models to recognize different dialects of Arabic.

Chakaki also discussed the blossoming startup scene throughout the Middle East. She praised the growth of educational, medical and financial technology startups in the region, but said more can be done to connect them to capital in the West.

“One area we can improve on is connecting east and west,” said Chakaki. "As we are growing these startups, taking them from their early stage and giving them more mature capital.”

One example is Anghami, which in February became the first Arab tech company to be listed on the NASDAQ stock exchange in New York.

At Transform.VC, Chakaki said they are working to connect Silicon Valley to regional startups.

The increasing role of women in Middle East startups is also important, according to Chakaki, who said that men and women invest somewhat differently. “Women favor social impact startups over men,” she said, and despite its reputation to the contrary, the Middle East and North Africa have a history of empowering women.

“In the1970s, we had very equitable societies that supported women,” she said. “Women were in very senior positions in government, they were also in industry, and oftentimes, they managed the money alongside their male counterparts. “

Chakaki also discussed the need to make charitable work more business-savvy. Her VIP.fund looks for seed-stage tech startups run by refugees and economically marginalized people. “How do we move the needle a little with philanthropy to make it more entrepreneurial?” she asked.