On the 50th anniversary of the deadly terror attack against Israeli athletes in Munich, Germany agreed to reopen investigation, and the two nations settled on compensation for the relatives of the victims. 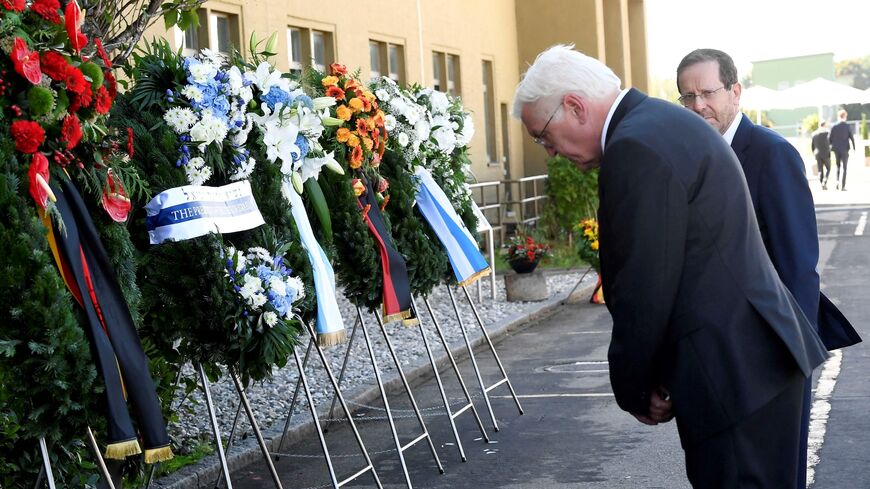 Israel's President Isaac Herzog (R) looks on as German President Frank-Walter Steinmeier bows after laying a wreath during a ceremony to mark the 50th anniversary of an attack on the 1972 Munich Olympics, at the Fuerstenfeldbruck Air Base, southern Germany, on Sept. 5, 2022. - On September 5, 1972, eight gunmen of the Palestinian militant group Black September broke into the Israeli team's flat at the Olympic village in Munich, shooting dead two and taking nine Israelis hostage. West German police responded with a bungled rescue operation in which all nine hostages were killed, along with five of the eight hostage-takers and a police officer. - THOMAS KIENZLE/AFP via Getty Images

Addressing the families of the victims of the 1972 Munich terror attack, as well as German and Israeli dignitaries, President Isaac Herzog hailed today the decision by German authorities to duly commemorate the event and to offer the families what Israel considers appropriate compensation.

After long negotiation, Germany agreed last week to pay a total of 28 million euros to the 11 families of the Israeli victims. It also agreed for the first time to officially take responsibility for the failings that led to the massacre.

“For many decades, as President Steinmeier said, Germany and the International Olympic Committee avoided commemorating the eleven athletes. For the families of the victims, their pain and sorrow for their loved ones’ loss, their agony and tears, and the traumatic scars that the survivors bore for years, were compounded by their anguish about this indifference and cold shoulder,” stated Herzog.

“The decision to take responsibility for the failures surrounding and following the massacre, to allow for an objective and rigorous inquiry, and to compensate the victims’ families is part of that sanctification of the good and triumph over evil. It represents, half a century later, an important step of morality and justice for the victims, for the families, and for history itself,” added the Israeli president, thanking German President Frank-Walter Steinmeier for his personal involvement in the recent German government decision.

The 1972 attack is etched in the collective Israeli memory. That year's Olympic Games were intended to showcase the new post-war Germany. Instead, it became symbol of Palestinian terror against Israelis. Eight Palestinian members of the Black September terror group stormed into the Israeli team's dormitories at the Munich Olympic village, killing two people and taking nine Israelis hostage. All nine Israelis were later killed by the Palestinian gunmen.

The issue of compensations for the relatives of the 11 Israeli athletes has long overshadowed diplomatic relations between the two countries, and more so in recent months, ahead of the 50th anniversary. Germany had refused to consider the attack as an international one, but rather as a local event, offering at the time only 4.5 million euros in total to the families.

Over the years, the relatives kept demanding that investigation of the attack be reopened and that compensations be reviewed, but German authorities refused. Some two weeks ago, German authorities proposed to increase the sum up to 10 million euros, including the 4.5 million already paid, but the families said the proposal was humiliating. Subsequently, some of the families announced they will boycott the 50-years commemoration. After their refusal, reports said that Herzog would also boycott the ceremony if no compromise was reached.

Germany also refused over the years to thoroughly investigate its own responsibility for the attack. In 2012, Israel released 45 official documents on the killings, including declassified material, which lambasted the performance of the German security services, but German authorities still refused to reopen the case. Only last week did the two countries agree to set up a joint historians’ committee to study the attack.

Herzog arrived yesterday in Germany, for a visit considered highly important for bilateral relations. After meeting with Steinmeier yesterday at the presidential palace in Berlin, Herzog met this morning with German Chancellor Olaf Scholz. Reports in the past few months noted that in its campaign against the nuclear Iran deal, Israeli leadership was mostly in contact with the Biden administration and the German government.