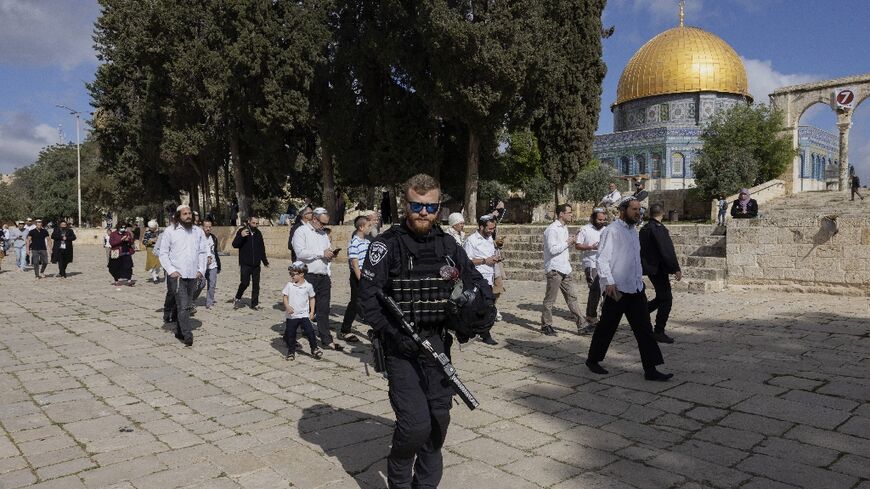 By longstanding convention, Jews are allowed to visit but not pray at east Jerusalem's flashpoint Al-Aqsa mosque compound but Palestinians complain the rules are being flouted by the growing numbers of pilgrims - MENAHEM KAHANA
Agence France-Presse
September 22, 2022 — Gaza City (Palestinian Territories) (AFP)

Hamas threatened "repercussions" over Jewish visits to Jerusalem's super-sensitive Al-Aqsa mosque compound, in a warning issued Thursday, days before the start of the Jewish high holidays when visitor numbers increase.

The mosque compound in the Old City of Israel-annexed east Jerusalem has been the focus of tensions for years, but Palestinians have voiced increasing anger at the rising number of visits by Jews, who revere the compound as their holiest site, the Temple Mount.

Mahmud Zahar, a senior member of the Islamist group which rules Gaza, warned "the continuation of the Zionist aggression and their brutality against Jerusalem and the holy shrines will be the cause of a major battle".

Speaking in a rare press conference in Gaza's Omari mosque, Zahar alluded to Palestinian concerns that a longstanding convention by which Jews may visit but not pray in the compound was being covertly flouted.

He said Israel would be held "fully responsible for the repercussions of these violations".

Beyadenu, a group that encourages Jews to visit the Al-Aqsa compound, said it was committed to increasing such visits.

"We broke the 50,000 visitor barrier on the Temple Mount" this past year, Beyadenu said ahead of the Jewish New Year, Rosh Hashana.

Tom Nissani, the group's chief executive, said: "The goal is 100,000 visitors next (Jewish) year", which begins on Sunday night.

Israeli far-right lawmaker Itamar Ben-Gvir, who has led multiple actions in Jerusalem in the past designed to provoke Palestinians, tweeted Thursday that he "went up to the Temple Mount this morning to pray and exercise sovereignty in the holiest place for the people of Israel".

Thousands of Jews -- Israelis and tourists -- are expected to visit Jerusalem's Old City during the high holidays, which run into mid-October.

Israel captured the Old City, along with rest of east Jerusalem, in the Six-Day War of 1967.

The Al-Aqsa compound is Islam's third holiest site and is managed by Jordan, as part of a delicate arrangement with Israel.

Hamas, which has ruled over the Gaza Strip since 2007, regularly describes itself as the primary force defending Al-Aqsa against Israel.

Israel and Hamas have fought four wars over the past 15 years.

Israel, which has imposed a blockade on Gaza since the Hamas takeover, has also in recent years sporadically increased the number of permits for Gazans to seek higher wage jobs in Israel.

The permits, highly sought after by many in Gaza, are also used by Israel as a means to apply pressure on Hamas, with Israel regularly suspending passage of workers through the Erez border crossing following Islamist rocket fire.

The Israeli defence ministry body responsible for civil affairs in the Palestinian territories, COGAT, on Thursday announced a 1,500 increase in the number of permits available, bringing the total to 17,000.