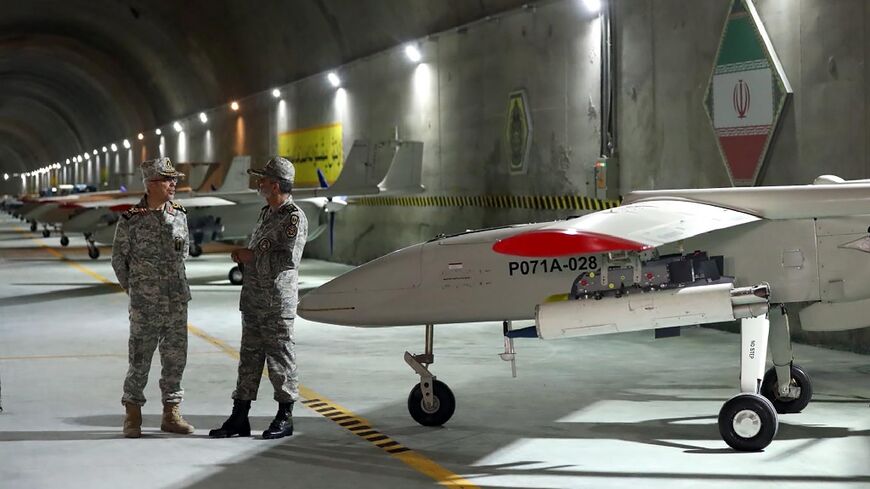 An underground drone base in western Iran, shown here in state television broadcast in May - -
Agence France-Presse
August 23, 2022 — Tehran (AFP)

"The accuracy and power of weapons... the capabilities of guidance and control systems and the combat capabilities of drones are among the things that will be tested and evaluated in this exercise," deputy coordinator of the armed forces Admiral Habibollah Sayyari told the state broadcaster.

"This is the first time that a joint drone exercise is conducted at the level of the four forces of the Islamic republic of Iran's army and the country's joint air defence base," Sayyari added.

No details were given as to how long the exercises would last.

Iran started developing drones in the 1980s during its eight-year war with Iraq.

"This is only a part of the drone power of... Iran's army, which is carrying out operations in various reconnaissance, surveillance and combat missions," Sayyari added.

The drills will take place "from the warm waters of the Gulf and the Sea of Oman in the south, to the eastern, western, northern and central parts of the country," he said.

Iran's army unveiled its first division of ships and submarines capable of carrying armed drones in July when US President Joe Biden was touring the Middle East.

In May, state television broadcast footage of an air base for drones under the Zagros mountain range in the west of the country.

The United States and Israel, arch-enemies of Iran, have previously accused Tehran of using drones and missiles to attack US forces and Israel-linked ships in the Gulf.

Washington said in July that Iran plans to deliver "hundreds of drones" to Russia to aid its war on Ukraine, an accusation Tehran dismissed as "baseless".