The recent summit hosted by Egypt between the leaders of five Arab countries may serve as a prelude to more joint action on security and economic development. 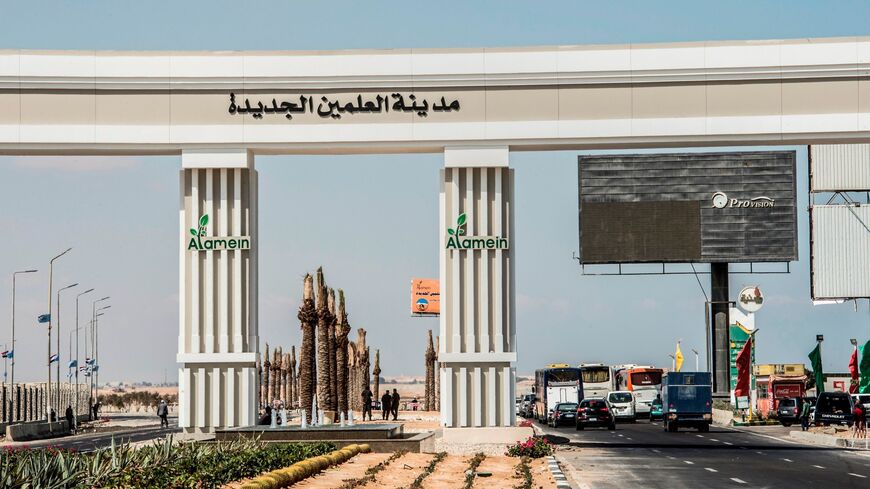 A picture taken on Oct. 21, 2017, shows the highway gates to the New Alamein City, situated about 100 kilometers (62 miles) west of the northern city of Alexandria. - KHALED DESOUKI/AFP via Getty Images

CAIRO — Amid the ongoing Russian-Ukrainian war, a rise in global inflation rates, tension between China and Taiwan, as well the repercussions of the coronavirus pandemic, Egypt organized a five-state summit in the New Alamein city on Aug. 22 at the invitation of President Abdel Fattah al-Sisi.

Sheikh Mohammed bin Zayed arrived at El Alamein International Airport on Aug. 21, where he was welcomed by Sisi, in his first visit to Egypt since his inauguration as president of the UAE in May. According to a statement by the Egyptian presidency, the two presidents discussed the current situation in the Arab region and regional security.

Bassam Rady, official spokesman for the Egyptian presidency, said in a press statement that the summit tackled ways to enhance joint cooperation in energy and food issues. According to Rady, the officials also stressed the need for economic and investment cooperation and Arab national security.

Analysts and observers say that the mini-summit comes at a critical time given challenges such as high inflation rates, the food and energy crises and the need to achieve security and stability in the Arab region.

“Add to this the crises in the Arab region, namely in Libya, Yemen, Iraq, Sudan, and other countries," Salah Halima, former assistant to the Egyptian minister of foreign affairs, told Al-Monitor. “This summit exemplifies the efforts of the Egyptian state in uniting the Arab ranks to face existing challenges and enhance joint cooperation in all fields.”

Anwar bin Mohammed Gargash, diplomatic adviser to the president of the UAE, said in an Aug. 25 tweet that the UAE is working to achieve solidarity in the Arab world, and this summit is a step in this direction.

The summit also spotlighted New Alamein, which the Egyptian state has turned from a city filled with mines left by World War II into a tourist city seeking investment projects.

Several development and tourism projects have opened recently in the new city, including the Alamein Lake, a high-end residential neighborhood, El Alamein Gardens neighborhood, and the hotels area with many tourist towers. New Alamein, with an area of ​​152,000 acres, is located within the Marsa Matrouh governorate.

Gargash added in his Aug. 25 tweet that “there is nothing that prevents our Arab region from being effective, having a vision and launching initiatives to enhance stability and prosperity.”

Ziad Shakhanbeh, a Jordanian analyst and professor of media at the University of Petra in Jordan, said in a press statement Aug. 22 that the New Alamein summit proves that there are continuous consultations between the participating countries. Through Arab cooperation, he went on to say, development can be achieved across the Arab world.

Ali bin Saleh, chairman of the Bahraini Shura Council, said in an Aug. 23 press statement that the need to unify positions and visions among Arab countries is growing given the challenges and obstacles facing the region.

He expressed his pride in the keenness of the five countries attending the summit to open more prospects for joint Arab action. He concluded by saying that the legislative authority in Bahrain strongly supports the directions of the summit leaders.