Following a public outcry, a Turkish court has suspended an app used to report the location of stray dogs after the information was allegedly used to kill canines. 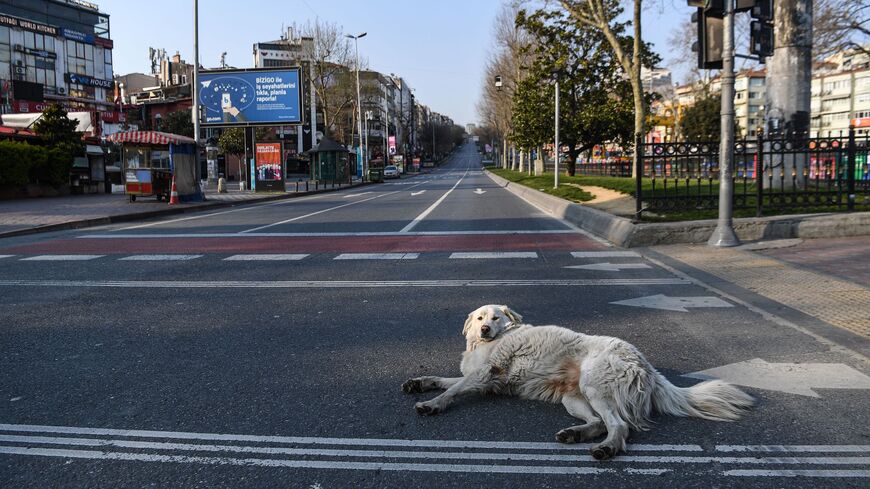 A stray dog lies on a street at Besiktas in Istanbul on April 11, 2020, as Turkish government announced a two-day curfew to prevent the spread of the epidemic COVID-19 caused by the novel coronavirus. - OZAN KOSE/AFP via Getty Images

Turkey’s notoriously politicized courts can show compassion after all. That, at any rate, is what animal lovers may have deduced from the 1st Criminal Court of Peace in Ankara’s decision to block a website and app that has been accused of complicity in the deaths of stray dogs.

The ruling followed a legal challenge that claimed Havrita was being used to track the animals and kill them. Havrita allows users to post photos and pin the whereabouts of stray canines.

Calls for a ban grew amid allegations that dogs located with the help of the app had been tortured and killed. Havrita, a composite of the Turkish words for “woof and map,” was launched in May. But the rising number of poisoned street dogs drew attention to the website.

At least eight animals were found dead in the tourist resort of Antalya near locations pinned on Havrita in recent days, the animal rights commission of the Istanbul Bar Association told the online news portal Gazete Duvar. It’s unclear who the perpetrators were.

A public backlash, with numerous celebrities joining in clamors to ban Havrita, resulted in the blocking order. A petition calling for the website to be outlawed secured more than 800,000 signatures within days of being launched.

“We will be back in a short while” Havrita vowed in a message posted on its website, adding that it will continue to be “the voice of victims,” an apparent reference to those who favor a cull.

A lawyer for Havrita claimed in an interview that its administrators had "good intentions."

Advocating for animals is a rare safe space in Turkey, where thousands of dissidents have landed in prison for airing critical views and prosecutors are accused of taking their cues from President Recep Tayyip Erdogan. The advocacy cuts across ideological lines, with overtly Islamist figures campaigning for animal rights.

A series of laws protecting animals have been adopted by the Parliament since Erdogan came to power in 2002. The first, in 2004, banned killing strays except when they “suffered from incurable diseases.” However, arsenic-laced meat is a method of choice among municipalities, and individuals, who choose to take the law in their own hands.

The question of how to deal with stray dogs is a heated one. Homeless canines roam the streets in large numbers. and sometimes in packs. Visitors are often surprised at how friendly, well fed and well treated they are. Animal lovers and restaurateurs feed them in towns and cities throughout the country, all beautifully captured in the 2020 documentary “Stray.”

Many sport tags on their ears which show that they have been neutered and vaccinated by local municipalities as mandated by law. Boji, a boisterous Anatolian shepherd mix, became a global celebrity this year after being photographed traveling on buses, trams and ferries across Istanbul.

Every so often, however, there are reports of stray dogs attacking humans. The pro-government daily Sabah newspaper said that Havrita was founded by a group of activists in response to the 2019 death of a high school student who was attacked by a pack of 25 canines.

In December 2021, Erdogan stepped into the fray when a 4-year-old girl was badly mauled by a pair of off-leash pit bulls.

He exhorted municipalities to gather strays and park them in shelters where they would be “safe” and “well-cared for” (an idea that was shelved after a public outcry in 2012). A mass roundup ensued.

In fact, the President and the First Lady, Emine, have their own furry friend that they rescued from a shelter in Istanbul two years ago. The lame Labrador mix is called “Leblebi,” Turkish for roasted chickpeas.