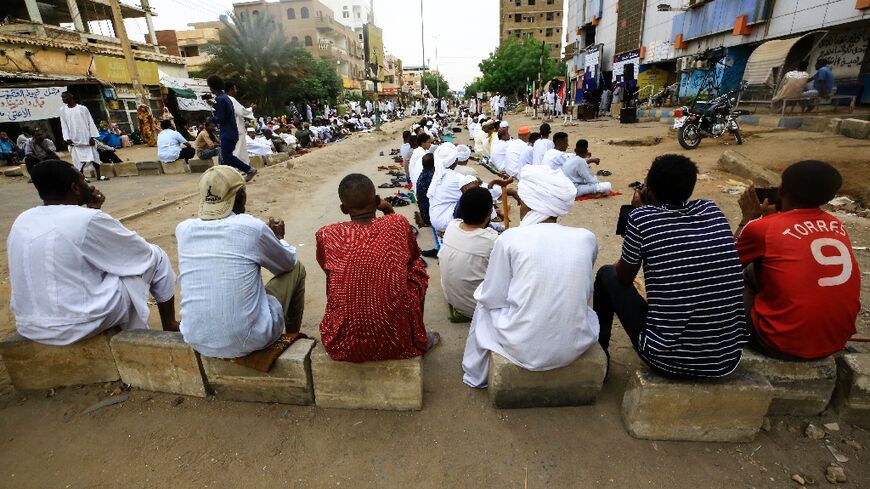 Sudanese protesters celebrated Eid al-Adha among barricades on Saturday during a sit-in against military leader Abdel Fattah al-Burhan and his October coup.

Protesters have continued to press the army chief to resign, days after he vowed to make way for a civilian government -- an offer quickly rejected by the country's main civilian umbrella group as a "ruse".

Burhan's surprise move has been met with wide scepticism, and pro-democracy groups announced on Thursday the formation of a "revolutionary council" as protests held firm.

The sit-in continued in the capital's twin city of Omdurman Saturday, as an imam took over the microphone usually reserved for protest chants to deliver the Eid sermon.

Protester Ibrahim al-Haj told AFP after the prayer that demonstrators hope to show that "no matter what is happening in the country, our message is ongoing".

The protests against Burhan were reinvigorated on June 30, when tens of thousands gathered and nine people were killed by security forces, according to pro-democracy medics.

A total of 114 people have been killed in the crackdown by security forces against protesters since the October coup, the medics say.

Worshippers on Saturday held up flags showing the faces of protesters killed in the crackdown.

"We are committed to the martyrs' rights," Haj told AFP. "We are not going to forget our martyrs even for a day, no matter what."