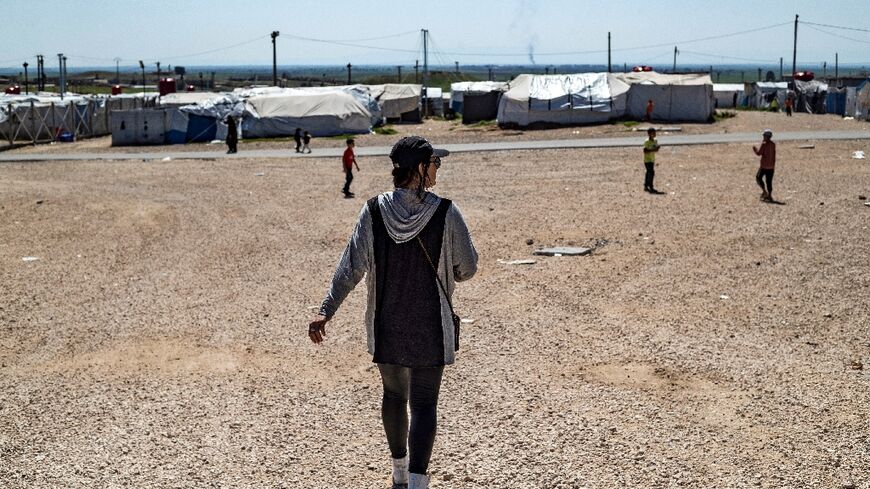 Emilie Konig, a Muslim convert from northwest France who became a notorious recruiter for the Islamic State group, pictured in the Al-Roj camp in northeastern Syria in 2021, is expected to face judicial proceedings after being repatriated - DELIL SOULEIMAN
Agence France-Presse
July 5, 2022 — Paris (AFP)

France repatriated 35 children and 16 mothers from camps in Syria holding family members of suspected Islamic State jihadists on Tuesday in the largest such operation by Paris after pressure from campaigners.

The French government had long refused mass repatriations of the hundreds of French children detained in Kurdish-controlled camps, dealing with them on a case-by-case basis that rights groups criticised as deliberately slow.

"France has today undertaken the return to the country of 35 French minors who were in camps in northeast Syria. This operation also includes the return of 16 mothers from these same camps," a statement from the foreign ministry said.

It added that the minors were handed over to child protection services while the mothers would face judicial proceedings that lawyers expect to lead to their prosecution for terror offences.

One of the women was 37-year-old Emilie Konig, a Muslim convert from northwest France who became a notorious recruiter for the group and urged supporters in the West to carry out attacks, a security source told AFP.

Family members of the returnees said that French officials had entered the sprawling and squalid Roj camp on Monday to select orphans and women with medical problems for the flight home.

"It's a 180-degree turn from the French government to repatriate women as well. It gives us hope, but there are still a lot of children over there," the aunt of one of the repatriated women told AFP, asking not to be named.

Western countries have faced a dilemma over how to handle their citizens detained in Syria since the end of military operations against the Islamic State group there in 2019.

Thousands of extremists in Europe decided to join the group as fighters, often bringing their wives and children to live in the "caliphate" declared in territory conquered in Iraq and Syria.

Until now, France had prioritised its security over welfare concerns for the detained, pointing to a series of attacks by IS jihadists, including the November 2015 assaults on Paris that left 130 people dead.

In a 2019 poll by Odoxa-Dentsu Consulting, seven out of 10 people surveyed were opposed to bringing back the children of jihadists to France.

Before Tuesday's operation, Paris had repatriated 126 children since 2016.

The decision to return 51 people in a single operation points to a change in policy that came after Germany and Belgium announced that they would bring back all of their minors from Syria.

Around 150 remain in Syria, lawyers and campaigners said on Tuesday.

"Our country has isolated itself more and more by choosing inhumanity and irresponsibility, unlike Germany, Belgium and many other European countries," the French campaign group Collective for United Families said in a statement on Tuesday.

A UN watchdog also increased the pressure in February when it said that France had violated the rights of children by leaving them for years in inhuman and life-threatening conditions.

The president of the Seine-Saint-Denis region northeast of Paris, where many previous returnees have been housed, said it was important to make a distinction between IS fighters and children, many of whom are orphans.

"Whenever this issue becomes a news story, I'm aware of the fantasies that it can create," Stephane Troussel told AFP recently. "The images of children indoctrinated by IS, weapons in their hands, are deeply ingrained."

But "the children are not guilty. They are above all the victims of the deadly excesses of their parents and what they need more than anything is an opportunity to rebuild themselves if we want them to rejoin society", he added.

A statement from France's anti-terror prosecutor's office said the mothers repatriated on Tuesday were aged between 22 and 39 and had been taken into custody.

In addition to Konig, there is also a mother-of-four with colon cancer whose mother, Pascale Descamps, went on hunger strike to campaign for her return on humanitarian grounds.

She left France in 2015 with her jihadist husband and three children. He was killed in combat, leading her to re-marry another IS extremist, who also died.

One of the minors, who is nearly 18, was also detained because "evidence exists likely to prove his association with a terrorist organisation", the statement from anti-terror prosecutors added.

IS declared a caliphate in 2014 in territory stretching across Iraq and Syria, but was progressively beaten back by a coalition of Western-backed local forces, losing its last territory in March 2019.