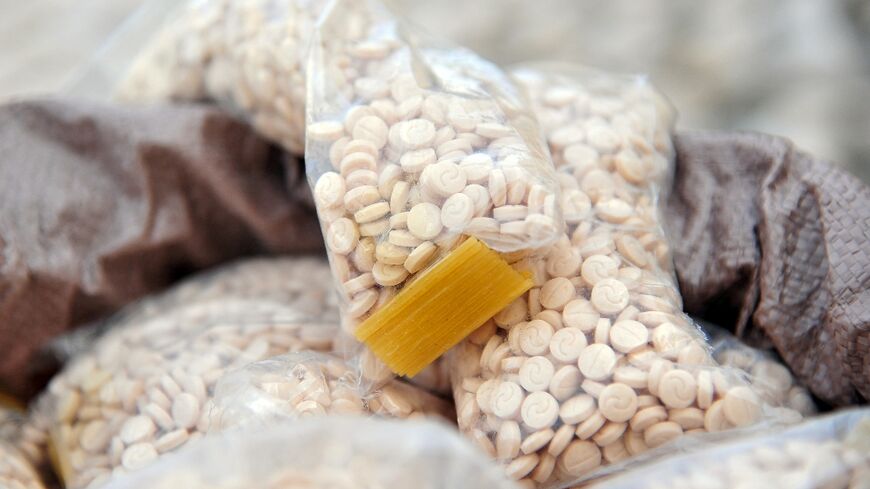 Law enforcement officers had earlier discovered 249 kilos of captagon hidden in steel machinery inside containers ready to leave the Mediterranean port of Latakia.

The ensuing investigation alerted the authorities "to the existence of a warehouse containing drugs on a farm" in the nearby province of Hama, a ministry statement said.

"The weight of the confiscated bags amounted to 2,103 kilos," the statement said, adding that 10 arrests were made and several vehicles confiscated.

With a kilo of captagon estimated to amount to around 6,000 pills, the cumulated number of pills seized tops 14 million, the largest recorded haul by the Syrian government in years.

Several recent reports have accused senior members of President Bashar al-Assad's government and security apparatus of being at the heart of the booming captagon trade.

The haul would be the largest recorded this year and bring the total of pills seized in the first half of 2022 to more than 145 million a across the region, according to an AFP tally.

The Syrian ministry did not specify exactly when the seizures were made, who were the men detained and what was the intended destination of the shipment.

The announcement of the seizure came three days after the International Day against Drug Abuse and Illicit Trafficking.

Anti-narcotics departments in Jordan, Saudi Arabia and other countries announced drug seizure figures for 2022 that suggest the captagon trade is still growing.

The vast majority of captagon, which derives its name from a once legal drug against narcolepsy, is produced in Syria and Lebanon and smuggled to its main consumer market in the Gulf.

It is used by the super-rich in Saudi Arabia as a party pill, by armed men for the feeling of invincibility it produces as well as by poorer people who need to work several jobs to make ends meet.

Based on the street value of captagon and the most conservative production estimates, the growing captagon economy is thought to top five billion dollars in worth.

That would make it by some margin the sanction-crippled Syrian government's largest export and biggest source of income.

The Syrian authorities have periodically announced seizures of much smaller amounts and faced accusations from some of their neighbours that they were not seriously cracking down on trafficking.