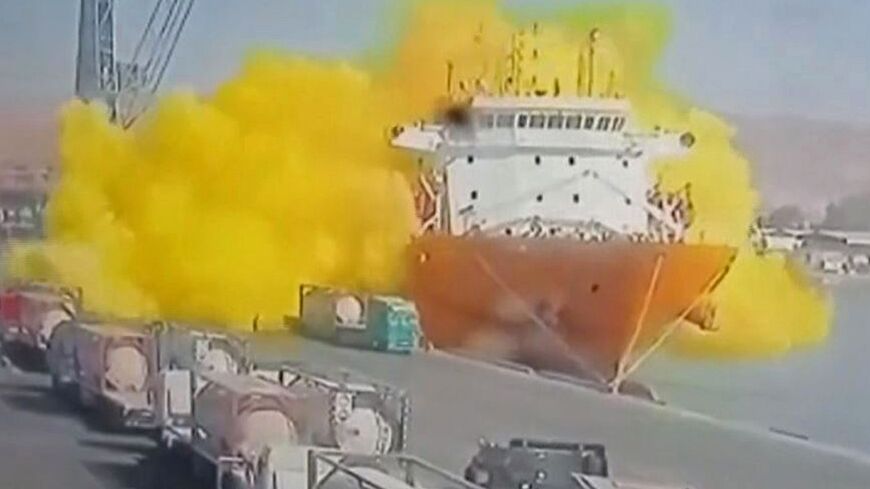 A chlorine gas explosion killed 12 people and injured more than 250 on Monday, authorities said, when a tank that fell from a crane released a poisonous yellow cloud at Jordan's Aqaba port.

Footage on state-owned Al-Mamlaka TV showed the large cylinder, said to have been carrying about 30 tonnes of gas, plunging from a crane on a moored vessel and violently releasing the chlorine gas cloud.

The force of the blast sent a truck rolling down the dock, while port workers ran for their lives.

"At exactly 15:15 this afternoon, a chlorine gas leak occurred in the port of Aqaba as a result of the fall and explosion of a tank containing this substance," the government's crisis cell said in a statement.

The death toll rose to 12 with 260 injured, both Jordanians and foreigners, it said, adding that almost half of the injured were being treated in hospitals. 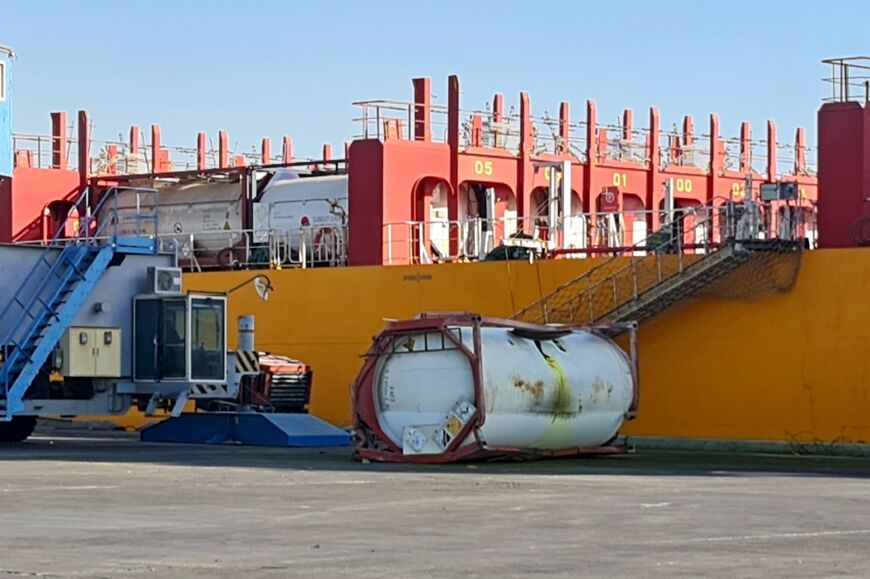 Nearby areas were evacuated and residents told to stay indoors as emergency responders established a 500-metre (546 yards) cordon around the site of the incident, the crisis cell said.

The deputy chief of the Aqaba Region Ports Authority, Haj Hassan, told Al-Mamlaka that an "iron rope carrying a container containing a toxic substance broke," leading to the fall and leak.

The channel also cited the former head of the company that operates the port, Mohammed al-Mubaidin, as saying that a vessel had been waiting to load almost 20 containers of liquified gas "containing a very high percentage of chlorine".

He added that the gas is heavy and "it is not easy for its gas clouds to move... as it concentrates in one area and is affected by wind movement".

The fallen white tank, punctured and stained yellow from where the gas burst out, came to rest on the dock directly beside the Forest 6 vessel. Ship-tracking websites say the deck cargo ship was built only this year and sails under a Hong Kong flag.

Local media showed members of civil defence forces, some dressed in hazmat suits, as well as medics rushing to the scene clad in masks. 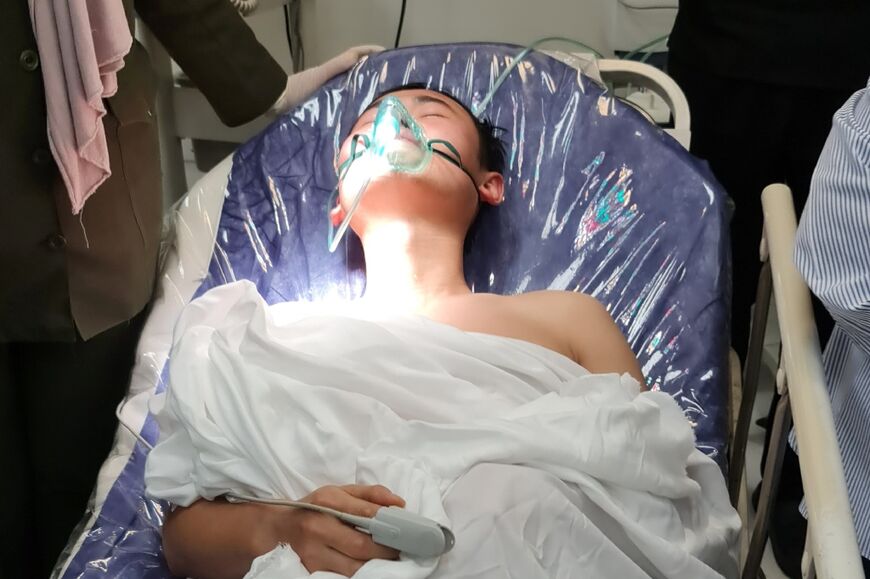 The leak was unlikely to reach neighbouring Israel, a spokeswoman for that country's environmental protection ministry said, noting that a northerly wind was blowing.

Jordan's crisis cell said authorities were "working to clear the scene of the accident from the effects of the leak, in preparation for the return of normal life."

Trucks were seen lined in a row carrying similar containers at the time the accident occurred.

The injured were transported to two state hospitals, one private facility and a field hospital.

As night fell dozens of people had gathered outside the emergency department of one Aqaba hospital. 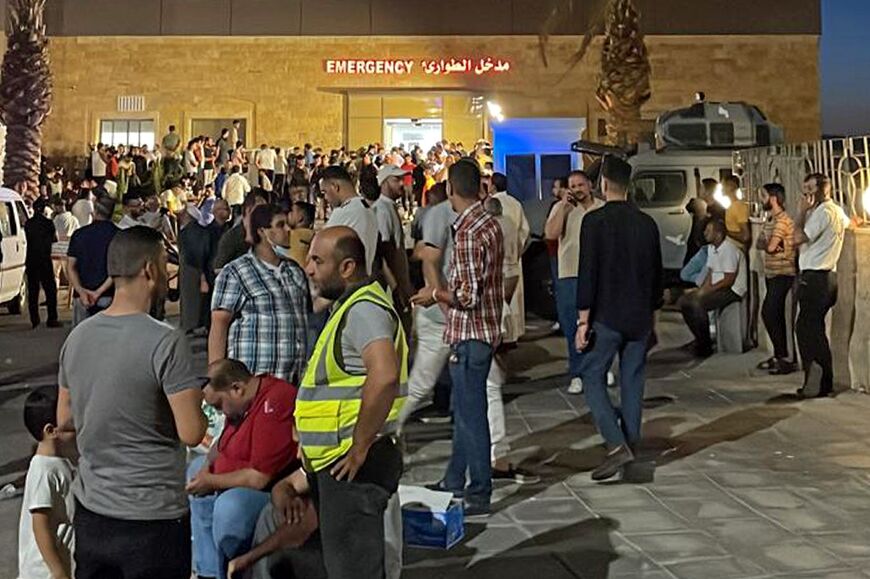 "The injured people are in medium to critical condition," he added.

He called on residents of Aqaba to "stay in their homes and shut all windows as a precaution", stating that the chemical substance is very dangerous, without specifying what it was.

Civil defence spokesman Amer al-Sartawy said more than 2,700 security and emergency personnel were deployed to the scene, and about 45 of them ended up among the injured. 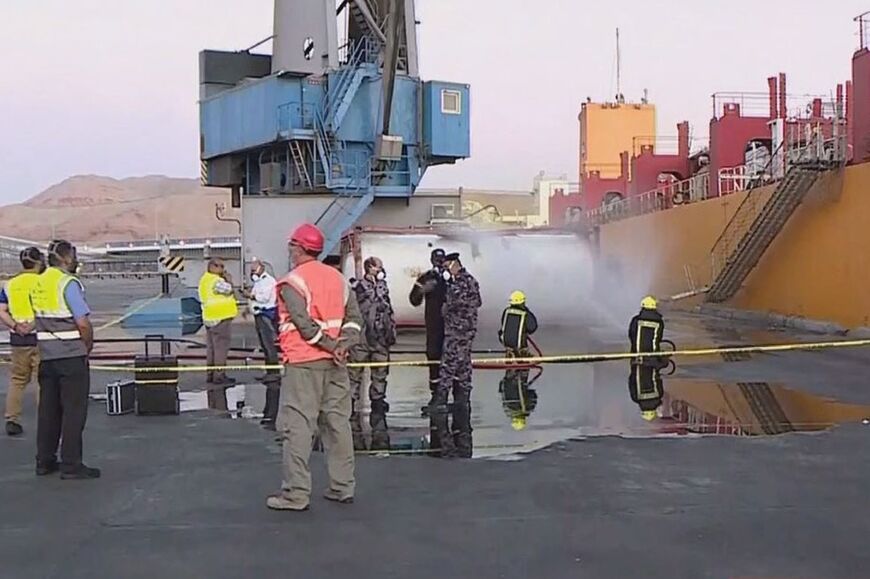 The prime minister headed a meeting with the interior and other ministers where he ordered that an investigation be opened to determine the cause, the crisis cell said.

"As we've told our friends in Jordan, the Israeli defence establishment is ready to assist with any effort, by any means necessary," Defence Minister Benny Gantz said.

Jordan's Aqaba port is the country's only marine terminal and a transit point for a vast portion of its imports and exports.