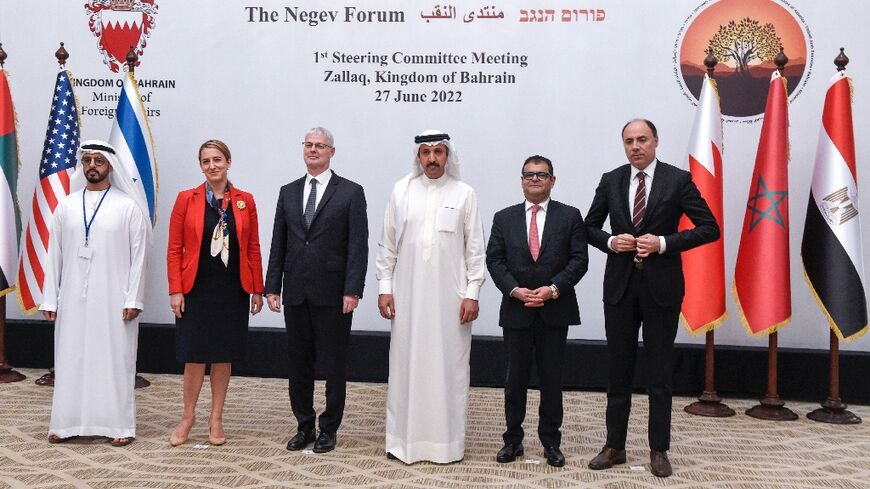 Diplomats from the United States, Israel and four Arab countries met in Bahrain to bolster cooperation ahead of a regional visit by US President Joe Biden - Mazen Mahdi
by Rasha Al-Ebrahim
June 27, 2022 — Manama (AFP)

Bahrain, host of the six-way talks, the United Arab Emirates and Morocco all opened ties with Israel under the US-brokered Abraham Accords in 2020, while Egypt made peace with the Jewish state in 1979.

Monday's meeting follows a foreign ministers' summit in the Negev desert in March, and comes ahead of Biden's visit to Israel, the Israeli-occupied West Bank and Saudi Arabia from July 13 to 16.

"We're trying to build a new regional framework... and tangible initiatives that can put flesh on the bones of the Negev forum," said Yael Lempert, the Principal Deputy Assistant Secretary of State for Near Eastern Affairs.

A joint statement also expressed the group's support for a negotiated settlement to the Palestinian-Israeli conflict.

"It's a very holistic approach, towards trying to advance this goal of building a new architecture that really has meaningful results," Lempert told reporters.

Foreign ministers from the six countries are expected to meet annually and the next ministerial talks should take place later this year, the statement said.

The Manama meeting is part of a flurry of diplomatic activity in the region ahead of Biden's visit, which Washington has played up as a boost for regional ties.

The US president has drawn heavy criticism over the trip, which contradicts his description of Saudi Arabia as a "pariah" over the 2018 murder of journalist Jamal Khashoggi by Saudi agents.

His visit to the world's top oil exporter follows a sharp rise in crude prices since Russia's invasion of Ukraine, causing pain for US voters and economies around the world.

Among the rash of official visits, Saudi's de facto ruler Crown Prince Mohammed bin Salman last week was in Turkey for the first time since Khashoggi's killing in the Saudi consulate in Istanbul.

Iraq's prime minister was in Saudi Arabia and Iran, and Qatar's emir visited Cairo for the first time since the countries restored relations following a Saudi-led rift.

On Monday, Egyptian flags fluttered in the Bahraini capital ahead of the visit of President Abdel Fattah al-Sisi, who is expected in the kingdom after a trip to Oman.

The UAE and Bahrain forged ties with Israel under the Abraham Accords, brokered by former US president Donald Trump, and later Morocco re-established relations with the Jewish state.

The Abraham Accords infuriated the Palestinians, who argued that they marked a betrayal of a decades-old Arab consensus to isolate Israel until it agrees to the establishment of a Palestinian state, with its capital in east Jerusalem.