Prospects for supervision of Iran's nuclear activities went cloudy as the UN nuclear watchdog chief decried a potential "fatal blow" from Iran's disabling of 27 IAEA-installed cameras at its key facilities. 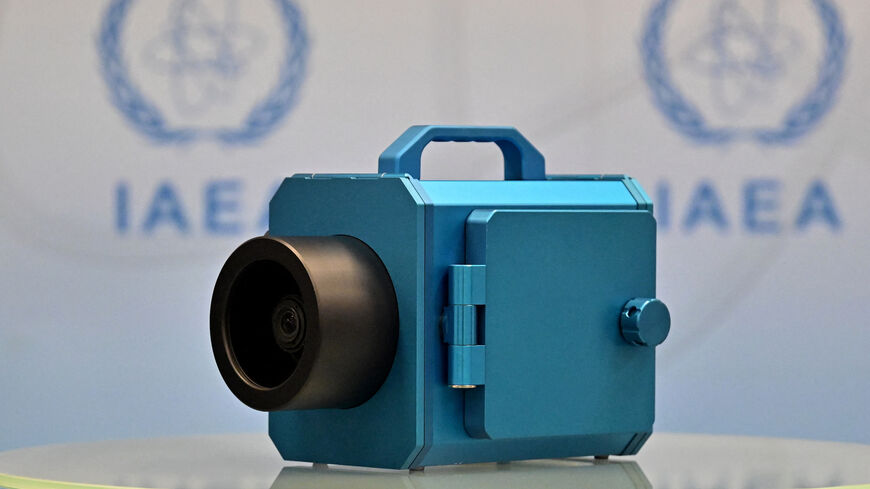 A monitoring camera used in Iran is seen during a press conference of Rafael Grossi, director of the International Atomic Energy Agency, on the current situation in Iran at the agency's headquarters in Vienna, Austria, on June 9, 2022. - JOE KLAMAR/AFP via Getty Images

The spokesperson for Iran's Foreign Ministry, Saeed Khatibzadeh, took to Twitter to denounce an "ill-advised" resolution passed by the board of governors of the International Atomic Energy Agency (IAEA).

Khatibzadeh warned that Iran's response will be "firm and proportionate," and accused the architects of the motion — the United States, the United Kingdom, France and Germany — of pursuing a "short-sighted" agenda.

Khatibzadeh defended Iran's nuclear program as "the world's most transparent" and warned that the West will be "responsible for the consequences" after the resolution, for which 30 out of 35 members of the IAEA's board voted. China and Russia rejected the motion, while India, Pakistan and Libya abstained.

As the IAEA was debating the resolution, Iran announced that it had switched off two cameras set up by the agency to monitor activities at its nuclear facilities.

The resolution "won't be the end of the world," said Foreign Minister Hossein Amir-Abdollahian while on a visit to New Delhi and only hours into the vote. He added that Tehran has a range of options in store and will not sit idly by. Meanwhile, the ISNA news agency quoted an "informed source" as saying that Tehran will accelerate the manufacture and installment of new-generation IR-6, IR-4 and IR-2m centrifuges.

The Iranian response did not end there. IAEA Director-General Rafael Grossi addressed reporters in Vienna on Thursday, declaring that Tehran has now conveyed to him the disconnection of 27 cameras. The situation, according to Grossi, posed a "serious challenge" to the agency's surveillance regime of Iran's activities. Lamenting uncertainties, Grossi warned that failure to get back on track of cooperation will be tantamount to a "fatal blow" to the already fragile 2015 Iran nuclear deal.

Back in Tehran, hard-line news outlets admired the country's atomic officials for restricting IAEA access. "The agency's Zionist eye is now blinded," trumpeted Javan, which is linked to the Islamic Revolutionary Guard Corps. The headline was a reference to a theory advanced by unaccommodating conservatives that the IAEA shares sensitive data from Iranian facilities with Israel, which has in turn used it to target Iran's nuclear infrastructure and its leading scientists.

Kayhan, linked to the office of Supreme Leader Ayatollah Ali Khamenei, described the move as "praiseworthy but insufficient." Alleging that the IAEA chief was "in full coordination with the Zionist regime," the paper renewed its call on Iranian authorities to pull Tehran out of the Treaty on the Non-Proliferation of Nuclear Weapons.

In Kayhan's reasoning, the move will trigger "domino effect" withdrawals by other "emerging nuclear powers," a situation Iran's Western enemies "are worried about."