The comments have drawn attention to anti-Muslim statements among some BJP officials, while sparking social media reactions on all sides. 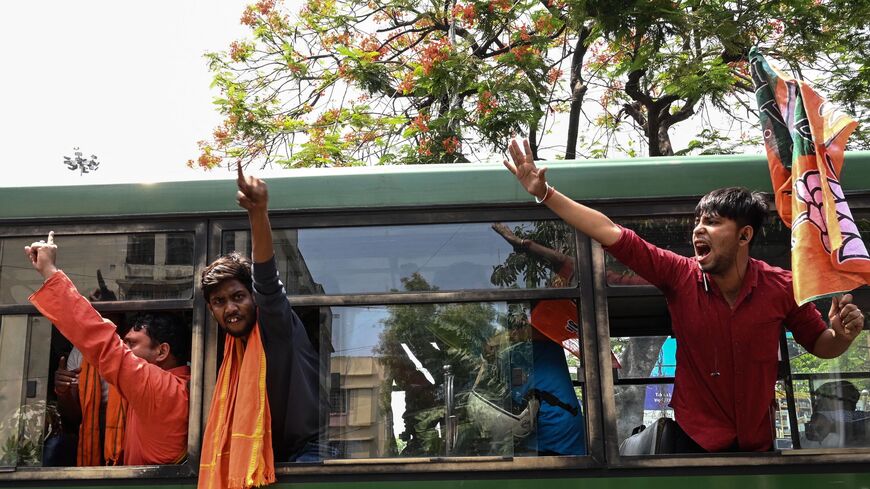 Bharatiya Janata Party (BJP) activists shout slogans from a police vehicle after being detained during a protest against West Bengal's state government over alleged irregularities in the School Service Commission (SSC) recruitment process, in Kolkata on May 20, 2022. - DIBYANGSHU SARKAR/AFP via Getty Images

The Indian government is in hot water over comments two politicians from the ruling party made about Islam's Prophet Muhammad.

What happened: The controversy began with comments made by Bharatiya Janata Party (BJP) spokeswoman Nupur Sharma on the TV station Times Now on May 27. Sharma was commenting on the Gyanvapi mosque controversy. The mosque in northeast India was built on the site of an earlier Hindu shrine. Some Islamists have reportedly claimed that there actually was no shrine at the site. During the TV segment, Sharma rhetorically asked if she should "mock" some parts of the Muslim holy book, the Quran. She specifically mentioned "flying horses," a likely reference to the buraq creature. She also brought up the Prophet Muhammad's marriage to Aisha, describing her as 9 years old at the time the marriage was consummated, according to local media.

Aisha’s exact age at the time of the marriage is unknown. Some scholars believe she was a child. Others have countered that she had reached puberty by time the marriage was consummated. Critics of Islam regularly cite Aisha’s age.

After Sharma’s comments, the Bharatiya Janata Party’s spokesman for the Delhi region Naveen Kumar Jindal accused Muhammad of rape in a tweet.

Sharma later apologized, saying she was lashing out in response to insults to Hindus. For his part, Jindal subsequently deleted the tweet. The Bharatiya Janata Party, which is India’s governing party and espouses Hindu nationalism, has also suspended both of them.

Both incidents have caused outrage in India and led to communal violence.

Reactions: The row has elicited strong reactions from Middle Eastern states. The United Arab Emirates’ Foreign Ministry condemned “statements insulting the Prophet in India” today. The Saudi Foreign Ministry denounced the remarks yesterday, while Qatar demanded an apology as Indian Vice President Venkaiah Naidu was in the Gulf state on a trade mission. Kuwait also summoned the Indian ambassador over the issue.

One supermarket in Kuwait went so far as to pull Indian products from its shelves in response.

Iran also summoned the Indian ambassador yesterday over the issue.

The response from Middle Eastern governments has elicited equally strong reactions on South Asian social media. A hashtag calling for a boycott of Qatar Airways is trending on Twitter, and some BJP politicians are joining in.

Economic boycott is the only solution. #BycottQatarAirways

One Pakistani television station tweeted in support of the Gulf states and called on all Muslims to boycott India.

Many thanks to Saudi Arabia, UAE, Kuwait, Bahrain, Qatar and all Arab countries-The way you have spoken out against Indian extremism is commendable

An Arabic-language hashtag praising Muhammad that is addressed to Indian Prime Minister Narendra Modi is also trending on the social media platform.

Why it matters: India is an important economic partner for Gulf states, and the fallout could threaten this relationship. In April, India and the UAE signed a landmark agreement aimed at boosting trade between the two countries. India is already a major trade partner of the UAE, Saudi Arabia and other Gulf states.

Iran’s Foreign Minister Hossein Amir-Abdollahian is also visiting India next week. The visit was scheduled before the controversy.

Know more: India under Prime Minister Modi has been widely criticized for discriminating against its Muslim citizens. Gulf states have been largely silent on the issue.