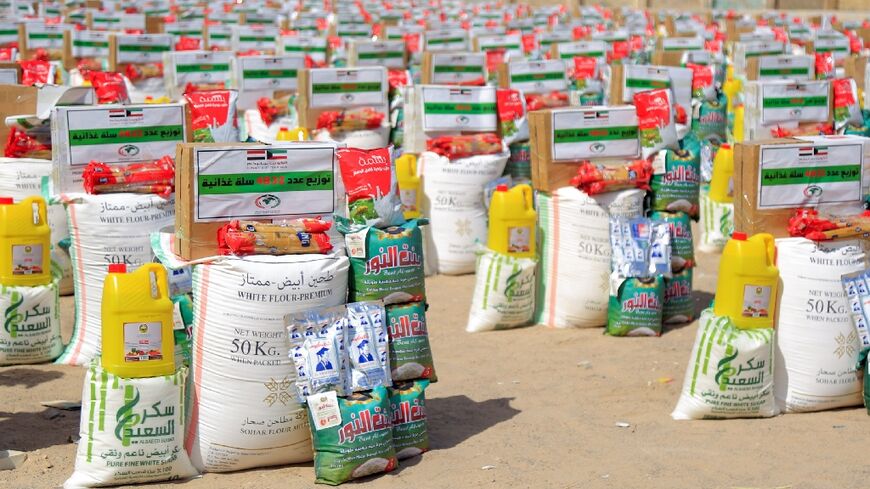 In this file photo taken on April 23, 2022, food aid rations donated by a Kuwaiti charitable organisation are prepared for distribution to displaced Yemenis on the outskirts of the northeastern city of Marib - -
Agence France-Presse
May 1, 2022 — Sanaa (AFP)

The United Nations has warned of a "worsening" humanitarian situation in Yemen but said a fragile two-month truce since early April could help reverse the situation.

"The worsening humanitarian crisis in Yemen is a reality that we need to urgently address," UN humanitarian coordinator for Yemen, David Gressly, said in a statement released late Saturday.

Gressly urged donors to take advantage of a UN-brokered truce that has largely held since April 2.

"The UN-led truce is a vital opportunity for aid agencies to scale up life-saving assistance and to reach more people in acute need quickly, including in areas where access was limited due to armed conflict and insecurity," he said.

"For aid agencies to immediately step up efforts, we count on sufficient donor funding. Otherwise, the aid operation will collapse despite the positive momentum we are seeing in Yemen today," Gressly warned.

He said the UN needs around $4.3 billion for its 2022 humanitarian response plan for Yemen "to reverse a steady deterioration of the humanitarian situation".

Yemen's conflict pits the Saudi-backed government against Iran-aligned Huthi rebels who seized the capital Sanaa in 2014.

Intense fighting that broke out the following year when a Saudi-led military coalition intervened has killed more than 150,000 people, while more than 200,000 others have died indirectly, including through hunger, unsafe water and disease, UN agencies estimate.

Eighty percent of the 30 million population is dependent on aid.

The truce, which can be renewed, has provided the impoverished country with a rare respite from violence.

It has also seen oil tankers begin arriving at the port of Hodeida, potentially easing fuel shortages in Sanaa and elsewhere.

The truce also involved a deal to resume commercial flights out of Sanaa's airport for the first time in six years, though the inaugural flight planned for late April was postponed indefinitely, with each side blaming the other for holding it up.