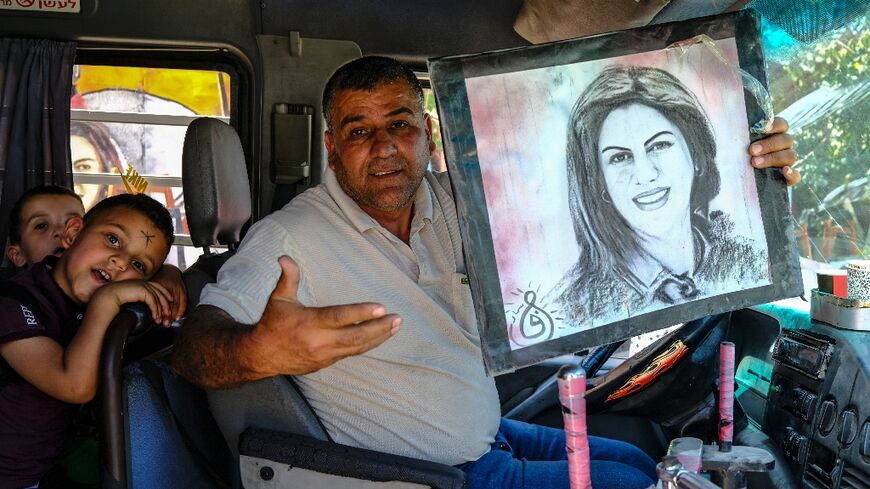 A van driver holds a portrait of Palestinian-American Al Jazeera journalist Shireen Abu Akleh as he passes the spot where she was killed while covering clashes in Jenin in the occupied West Bank - RONALDO SCHEMIDT
Agence France-Presse
May 20, 2022 — Washington (AFP)

More than 50 US lawmakers on Friday called on the FBI to investigate the killing in the West Bank of Al Jazeera reporter Shireen Abu Akleh, despite Israeli promises of a probe.

The 57 House members, largely left-leaning Democrats and led by Representative Andre Carson, noted that Abu Akleh held US citizenship and pointed to divergent accounts on how she died on May 11.

"Given the tenuous situation in the region and the conflicting reports surrounding the death of Ms. Abu Akleh, we request the State Department and the Federal Bureau of Investigation launch an investigation into Ms. Abu Akleh's death," they wrote in a letter.

"As an American, Ms. Abu Akleh was entitled to the full protections afforded to US citizens living abroad," they wrote to Secretary of State Antony Blinken and FBI Director Christopher Wray.

Al Jazeera and Palestinians say Israeli forces killed Abu Akleh, a prominent journalist, as she covered an Israeli army raid in Jenin, in the north of the occupied West Bank.

Israel says she may have been killed by Palestinian gunfire or a stray shot from an Israeli soldier.

The Israeli ambassador to Washington, Michael Herzog, said he was "disheartened" by the letter and that Israel had sought a joint investigation with the Palestinian Authority that would include a US observer role.

"Our call was flatly rejected by the PA, which is cynically using Ms. Abu Akleh's death to instigate an anti-Israel propaganda campaign," he said.

He called instead for Congress to press the Palestinian side on an investigation, adding that Israeli troops "would never intentionally target members of the press."

The State Department has said that it believes Israel can conduct a credible investigation but Blinken has also criticized the Israeli police for its use of force during Abu Akleh's funeral.