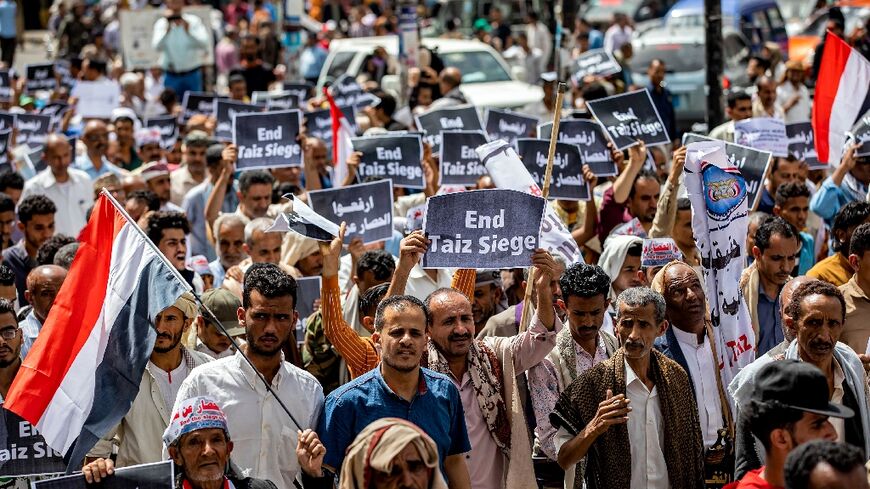 Protesters demonstrate in Yemen's third city of Taez as talks open in Jordan on easing a rebel blockade that has virtually cut it off from the rest of the country - AHMAD AL-BASHA
Agence France-Presse
May 26, 2022 — Amman (AFP)

The UN special envoy has urged Yemen's warring parties to renew their two-month truce, praising its "tangible benefits" as the deadline approaches next week.

Swedish diplomat Hans Grundberg said the first nationwide truce since 2016 had provided an opportunity to break the cycle of violence that has left hundreds of thousands dead and driven millions to the brink of famine.

"We have seen the tangible benefits the truce has delivered so far for the daily lives of Yemenis," Grundberg said in a statement late on Wednesday.

"The parties need to renew the truce to extend and consolidate these benefits to the people of Yemen, who have suffered over seven years of war."

He was speaking as talks opened in the Jordanian capital Amman between Yemen's Huthi rebels and its internationally recognised government on ending the rebel blockade of Taez, Yemen's third biggest city, which has been largely cut off since 2015.

The meetings were part of the truce agreement that also included resuming commercial flights from Yemen's rebel-held capital, Sanaa, and oil shipments to the lifeline port of Hodeida, which is also under Huthi control.

The Iran-backed Huthis seized Sanaa in 2014, triggering a Saudi-led military intervention in 2015. The war has created the world's worst humanitarian crisis, according to the United Nations.

Under the truce, which expires on June 2, more than 1,000 passengers have flown between Sanaa and Amman, and preparations are underway to start flights to Cairo.

"The truce has presented a window of opportunity to break with the violence and suffering of the past and move towards a peaceful future in Yemen. The parties need to seize this opportunity," he said.