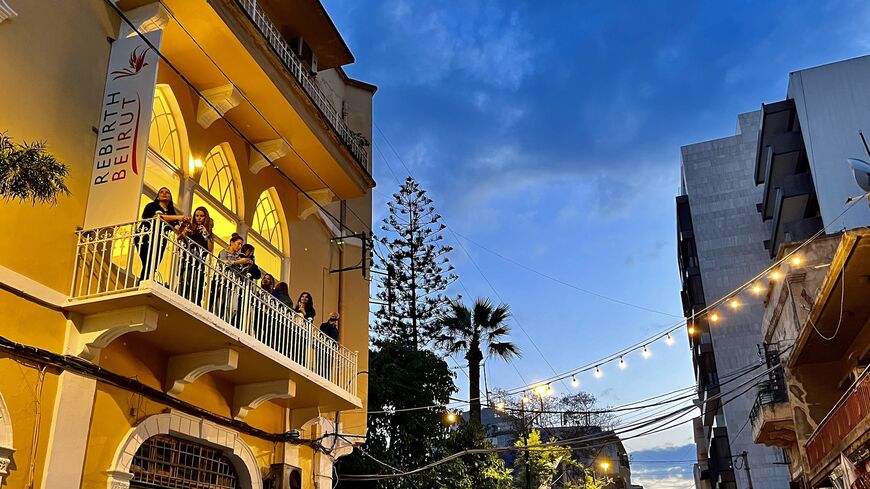 Beirut's Gemmayzeh Street lights up as part of the Light Your Street initiative by the nongovernmental organization Rebirth Beirut, May 22, 2022. - Rebirth Beirut 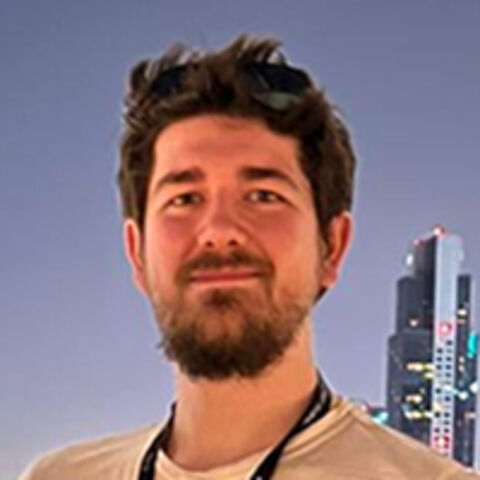 BEIRUT — Dozens of people gathered on Gemmayzeh Street — once the heart of Beirut’s vibrant nightlife scene — Sunday to watch as light was restored to the area. Ordinarily, the streets would already be growing dim with the sunset. Instead, with the press of a big red button, onlookers were bathed in the bright glow of street lamps and party lights.

It was the culmination of the nongovernmental organization Rebirth Beirut’s “Light Your Street” initiative in front of its Gemmayzeh headquarters.

“All our initiatives are all about light, hope and bringing back a certain feeling of joy,” Rebirth Beirut’s founder and president, Gabriel Fernaine, told Al-Monitor. “We've been working for the last 10 days on Gemmayzeh, Mar Mikhael and Pasteur Street.”

“Today, for the launching of our initiative, we are using power from three different generators,” he said. “We hope that we will have 24-hour electricity back in a couple of years and this initiative will not be needed anymore, but until then, we decided to take it into our own hands to light up the city.”

Founded in 2020 in the aftermath of the Beirut port explosion, Rebirth Beirut has been actively involved in relief efforts across the city. It first distributed food parcels and baby formula and assisted with vaccination efforts against the COVID-19 pandemic.

In the absence of government action to address systemic infrastructure problems, the group has widened the scope of its projects to compensate.

Extended power outages — a symptom of Lebanon’s severe economic troubles — have left many areas without functioning electricity, especially at night. The periods of extended darkness have led to an increase in crime and forced many businesses that previously remained open until the early morning to close, reducing once lively areas to empty spaces.

Many in Lebanon are now forced to rely on diesel-powered generators, but rising fuel prices driven by the depreciation of the Lebanese pound are making this solution less and less tenable for a population already largely living in poverty. Most areas don’t receive more than two hours of state electricity per day.

In an effort to breathe life back into the area and encourage visitors to return, Rebirth Beirut has devised a simple but elegant solution. By drawing on supplies from generators already in place and encouraging locals to lend their support to the project, the group has allowed the people of these districts to pool their resources into something far greater than the sum of their parts.

“We are launching the Light Your Street initiative in cooperation with MEDCO, who will provide incentives to owners of generators and buildings that have been involved in the initiative,” said Fernaine during a speech. “I also thank the Local Community Support Program, funded by USAID, which supplied and installed 500 LED lighting devices in Beirut's most affected streets.” The US Agency for International Development funds civilian projects and offers development assistance overseas.

"Our dream is for Beirut to live and to stay alive all our lives, radiant with joy and hope," echoed Michel Shammas, director of innovations at MEDCO.

“The idea was very smart,” Gemmayzeh resident George Allam told Al-Monitor. “People from the neighborhood contribute power from their generator and get a discount from the fuel provider. At the end of the day, it costs them nothing; it uses only electricity that is offset.”

“I know this isn't much but, for the moment, I think it's very good to have these kinds of initiatives because we really need them,” said Lucas Faisal, also from Gemmayzeh. “It's quite sad to have a street that has no light. If we have light, it gives us hope.”

The project offers an impressive proof of concept for an idea that can be applied in other areas of Beirut and beyond, even without Rebirth Beirut’s involvement.

Rebirth Beirut has also installed solar-powered traffic lights that operate independently from the struggling national grid, and has plans to service 110 intersections. The group has also repaired over 1,000 potholes across the city, making the poorly maintained roads safer for both pedestrians and motorists, especially at night.

As the economic crisis continues, the main obstacle is funding. While many laud Rebirth Beirut’s solutions to serious societal problems, these projects are expensive undertakings.

“Unfortunately, in Lebanon, the private initiatives are the only things that work,” said Nadeem Odeh, a resident of nearby Achrafieh. “These are very good initiatives. We hope that one day our state will take over and do what needs to be done with our taxes, instead of paying our corrupt politicians.”

Nevertheless, Fernaine remains confident that this is just the beginning. Rebirth Beirut already has plans to expand the Light Your Street initiative to 10 more neighborhoods in the city and hopes that its initial successes will inspire others to support future projects.

“We decided to start with Gemmayzeh because it is a traditionally touristic area with a lot of businesses and nightlife,” Fernaine explained. “Hopefully, we will go to Hamra, to Bliss and to many other important streets in Beirut and other areas. We will cover all Beirut if we can get more funds.”

“We count a lot on funding and private donations,” he concluded. “We hope to get donations from our expatriates. We hope that they will see what we do and help us.”