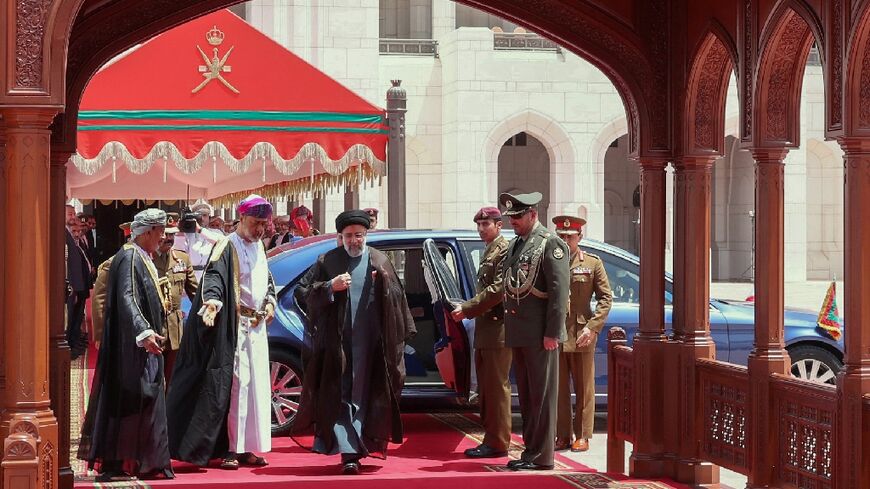 Iran's President Ebrahim Raisi arrived in Oman on Monday as the two countries signed a string of trade deals and as international talks on Tehran's nuclear programme hang in the balance, leaving the Islamic republic under sanctions.

Raisi, on his second Gulf visit since taking office in August, was greeted by Sultan Haitham bin Tareq at the airport and received a 21-gun salute at the royal palace, an Omani statement said.

Raisi's one-day trip comes at a time when renewed talks on restoring a 2015 nuclear deal are at a stalemate. Oman played a mediating role between Tehran and Washington in the build-up to the original agreement.

The countries signed 12 memoranda of understanding during the visit, including in the fields of oil and gas, transport, education, trade and investment, reported the official Oman News Agency.

"Trade exchanges between the two countries of Oman and Iran will improve definitely," Raisi said before departure, according to Iran's state news agency IRNA.

"Both countries are determined to upgrade the level of political and economic ties," he added.

A delegation of 50 Iranian businessmen travelled to Oman last week, IRNA said, adding that Iran's minister for roads and urban development has announced plans for a joint shipping line and tourist flights.

Oman is also seeking to import gas from Iran by building an offshore pipeline between the two countries, who are discussing the development of joint gas fields offshore.

The sultanate, which faces Iran across the Gulf of Oman, endured economic pain during the pandemic, with its GDP dropping 6.4 percent in 2020 and government debt soaring. It saw rare protests over high unemployment and lay-offs last year.

Raisi visited Qatar in February, where he met with Emir Tamim bin Hamad Al-Thani and took part in a conference of gas exporting countries.

Stop-start talks to bring Iran back to the 2015 deal curbing its nuclear ambitions in return for a lifting of sanctions that was abandoned by former US president Donald Trump in 2018, began in April last year.