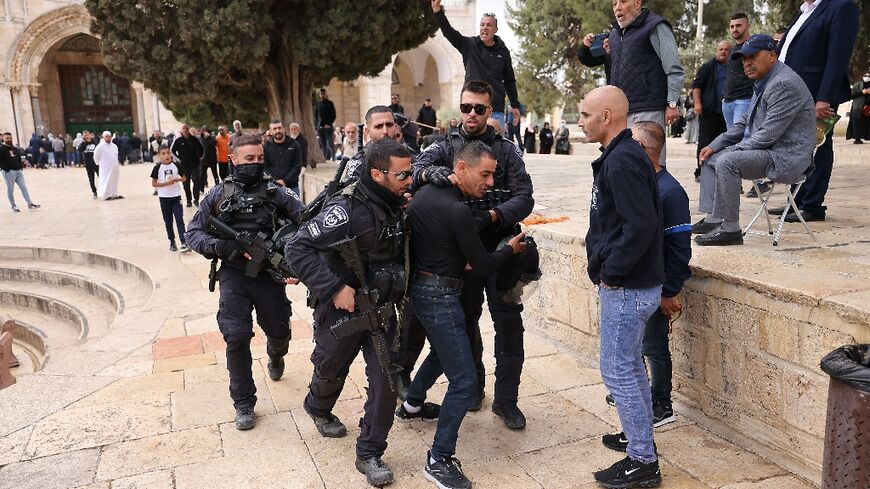 Israeli police restrain a Palestinian protester as security forces accompany a group of Jewish visitors past the Dome of the Rock at the Al-Aqsa mosque compound in the Old City of Jerusalem on May 5, 2022 - AHMAD GHARABLI
Agence France-Presse
May 5, 2022 — Jerusalem (AFP)

Clashes erupted between Israelis and Palestinians at Jerusalem's Al-Aqsa mosque compound on Thursday, after a 10-day cooling of tensions at the holy site, Israeli police said.

The Israeli police said they had repelled "dozens of rioters" who had been "throwing stones and other objects" at the security forces.

An AFP correspondent said there was a large police presence in front of the mosque, while the Palestinian Red Crescent had yet to report any casualties from the violence.

The clashes came on the anniversary of Israel's 1948 independence and followed a tense period in which the Muslim fasting month of Ramadan, the Jewish festival of Passover and the Christian holiday of Easter overlapped.

Since mid-April, clashes between Israeli police and Palestinians have wounded nearly 300 at the flashpoint Al-Aqsa mosque compound.

The site is Islam's third-holiest. It is also Judaism's holiest place, known to Jews as the Temple Mount.

Palestinians have been angered by an uptick in Jewish visits to the compound, where by long-standing convention Jews may visit but are not allowed to pray.

Israeli Foreign Minister Yair Lapid has said the Jewish state "will not change" this status quo.

"You should be ready for a great battle if the (Israeli) occupation does not stop attacking Al-Aqsa mosque," said Yahya Sinwar, Hamas chief in the Israeli-blockaded Palestinian enclave.

A raid by Israeli police into the compound last month sparked widespread condemnation from regional leaders.

Jordan, which manages Jerusalem's holy sites, accused Israel of upsetting the long-standing status quo which allows all faiths to worship at their sacred sites in the city.

The mounting violence since March 22 has killed 12 Israelis, including an Arab-Israeli police officer, and two Ukrainians in four separate attacks inside Israel. Two of the deadly attacks were carried out in the Tel Aviv area by Palestinians.

A total of 26 Palestinians and three Israeli Arabs have died during the same period, among them perpetrators of attacks and those killed by Israeli security forces in West Bank operations.