The drug is being smuggled from Syria. 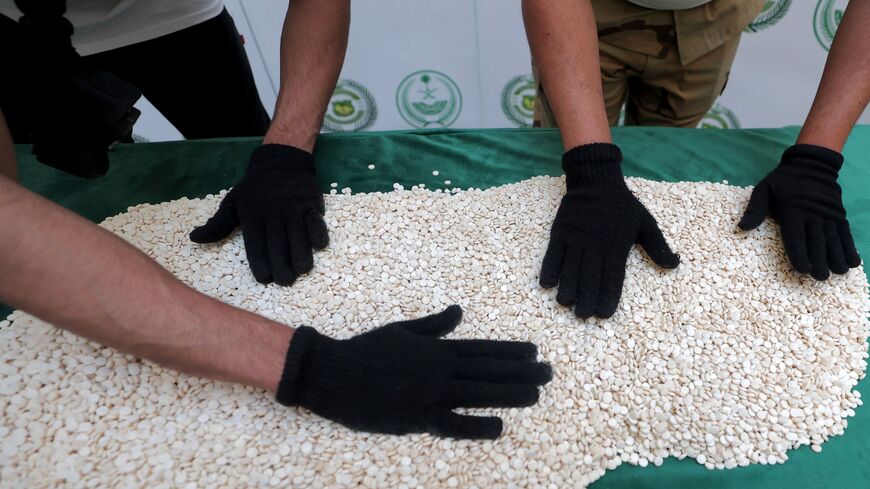 Officers of the Directorate of Narcotics Control of Saudi Arabia's Interior Ministry sort through tablets of captagon (Fenethylline) seized during a special operation and presented before AFP afterwards in the Red Sea coastal city of Jeddah on March 1, 2022. - FAYEZ NURELDINE/AFP via Getty Images

The Captagon trade is increasing in Jordan, fueled by more advanced smuggling, the Syrian military, a poor economy and more, an official said today.

The New Lines Institute in Washington hosted a conference today on the amphetamine drug that is widely used throughout the Middle East. Raad Elfawair of the Jordanian embassy and Dora Catutti from the French embassy spoke on a panel hosted by the institute’s Caroline Rose about the regional implications of Captagon.

The drug gained notoriety in the mid-2010s for its use and trade by Islamic State fighters. Elfawair said that in 2021, Jordanian authorities seized 16 million Captagon pills. Just five months into 2022, they have seized 20 million pills.

The diplomat said that some elements of Syrian government forces are helping to smuggle Captagon into the kingdom. “We are witnessing recently groups becoming well organized, supported by indisciplined members of the Syrian army,” he said.

A smuggling group typically consists of around 200 individuals who then split into three smaller groups. Oftentimes, one group will try to distract the Jordanian military with gunfire, another will conduct surveillance and the third will try to enter Jordan. There are around 13 smuggling attempts per day, according to Elfawair.

Catutti, who works on Middle East issues for the French embassy, said that Captagon’s prevalence was a “gradual realization.” She pointed to the reopening of the Syria-Jordan border in 2018 as a turning point in the trade. For now, she said Captagon is “not the most successful” drug in the European market.

Elfawair noted that most of the Captagon smuggling is done outside of Jordan’s official border crossings with Syria. Smugglers particularly take advantage of bad weather in desert and mountainous areas, he said.

In January, Jordanian border guards were involved in a deadly shootout in the snow at the Syrian border. At the same time, Jordan's relationship with the Syrian government has improved in recent months, following years of a lull over the Syrian civil war.

Captagon is also tied to Jordan’s economic problems. “The problem is unemployment,” Elfawair said. “With 30% unemployed Jordanians the more welcoming environment is created for these drugs.”

The Captagon issue involves numerous countries in the region. Saudi authorities regularly thwart smuggling attempts, but drug use is prevalent throughout the kingdom — particularly among youth.

An April report from the New Lines Institute co-authored by Rose implicated elements of the Syrian government and its Lebanese ally Hezbollah in the Captagon trade.