Reports that the Islamic Republic is set to execute the scientist came as a Swedish court prepares to sentence a former Iranian official in connection to the killing of thousands of political prisoners in his country in 1988. 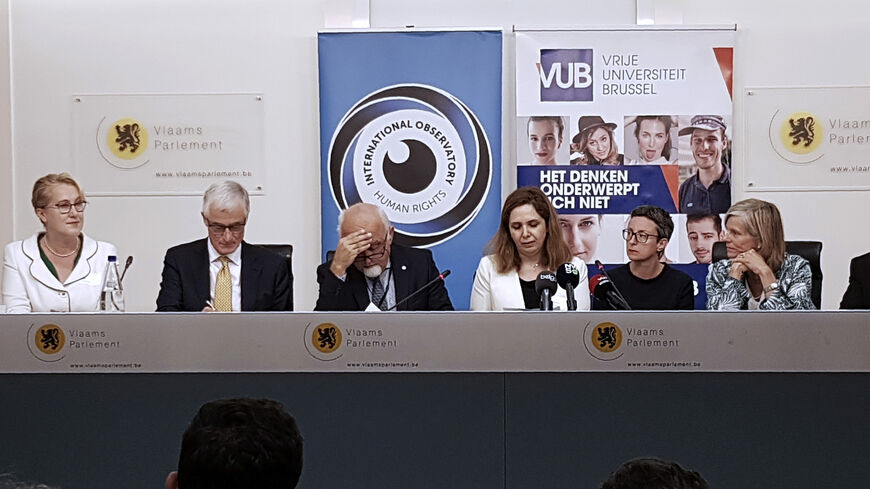 (From 2ndL) Flemish Minister-President Geert Bourgeois, Flemish Parliament chairman Jan Peumans, Vida Mehrannia, an interpreter and VUB rector Caroline Pauwels hold a a press conference on June 26, 2018, at the Flemish Parliament in Brussels regarding Iranian researcher Ahmadreza Djalali, who received the death penalty for espionage in Iran without a fair trial. - MAARTEN WEYNANTS/AFP via Getty Images

Iranians took to social media to draw the world's attention to the Islamic Republic's plans to send a Swedish-Iranian national to the gallows for espionage.

The reactions followed a report by the official ISNA news agency indicating that Iran would implement the death penalty for Ahmad-Reza Djalali by May 21.

A disaster medicine scientist, Djalali was arrested in Iran in 2016 while on a visit upon invitation by two state universities. Iran alleges that the doctor passed on intelligence that Israeli spy agencies used to assassinate two nuclear scientists.

Djalali denied the allegation but made a videotaped confession, based on which he was handed the death penalty. Days later, the scientist released an audio file of himself explaining how he had been "psychologically pressured" and lured into the confession in exchange for promised freedom.

UN rights experts and Amnesty International have questioned the legitimacy of the proceedings over lack of fairness combined with torture techniques during lengthy periods of solitary confinement.

Pictures comparing a significant weight loss during the time span before Djalali's arrest and his detention resurfaced on social media following the news of Djalali's imminent execution.

With hashtags trending in Persian and English, a wave of rage and criticism from ordinary Iranians and members the country's civil society continues to hit the government with calls for the execution to be suspended.

The timing is noteworthy. The news of the impending execution was released on the same day closing arguments were heard in a 30-month-long trial in Sweden of Hamid Nouri, a former official in Iran's judiciary. Swedish prosecutors have demanded that Nouri be sentenced to life over his links to the execution of thousands of Iranian political prisoners in 1988, a case in which incumbent hard-line President Ibrahim Raisi, a former judge, is also accused of being closely involved.

Nouri has denied the murder and war crimes charges leveled against him and the Iranian government has dismissed his "show trial" and called for his immediate release.

"The threat to execute Ahmad-Reza Djalali right at the closure of Hamid Nouri's trial is yet more proof that the Islamic Republic leadership is taking dual nationals hostage," tweeted Mahmood Amiry-Moghaddam, the director of the Oslo-based nongovernmental organization Iran Human Rights, as he urged the international community to act urgently to stop the "crime."

Amid the debate, Iran was seen by critics as using the Djalali case as a pressure card against the Swedish government for a potential prisoner exchange. Yet Djalali's wife Vida Mehran-nia told the Prague-based Persian-language Radio Farda that even with the execution looming, she still would not favor seeing her husband swapped with the former Iranian official.

She also complained about "insufficient" Swedish government efforts to secure her husband's release, saying, "They were not of much help and merely promised to pursue the matter."

Sweden's Foreign Minister Ann Linde tweeted about the "extremely worrying" reports, saying she was in contact with the Iranian side.