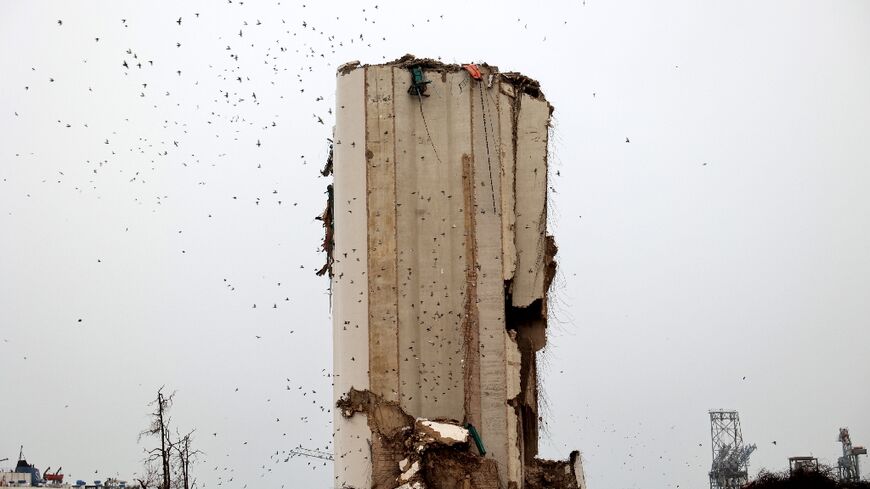 Remains of Beirut's grain silos, which absorbed much of the impact of the 2020 port explosion - ANWAR AMRO
Agence France-Presse
April 14, 2022 — Beirut (AFP)

Lebanon on Thursday ordered the demolition of Beirut's grain silos which are at risk of collapse following a devastating 2020 port explosion, prompting protests from relatives of blast victims who want the silos preserved.

"We tasked the Council for Development and Reconstruction with supervising the demolition process," Information Minister Ziad Makari said after a cabinet meeting, without specifying a time frame.

Makari said the government's decision was based on a report by Lebanon's Khatib and Alami Engineering Company, which warned that the silos in the port of the capital Beirut could collapse within months.

"Repairing them will cost a lot," Makari said.

Last year, Swiss company Amann Engineering also called for their demolition, saying the most damaged of the silos were tilting at a rate of two millimetres per day (0.08 inches).

Once boasting a capacity of more than 100,000 tonnes, an imposing 48 metre (157 foot) high remnant of the structure has become emblematic of the catastrophic August 4 port blast.

It killed more than 200 people and devastated entire neighbourhoods of the capital in 2020.

Still, the silos absorbed much of the blast's impact, shielding large swaths of west Beirut from its ravaging effects.

Activists and relatives of blast victims have called for the grain storage facility to be preserved as a memorial site.

Following Thursday's announcement, relatives of blast victims gathered near the silos to denounce plans for demolition.

"We demand that the silos remain as a memorial monument that witnessed" one of history's largest non-nuclear explosions, said a spokesperson for the families, arguing that damaged sections could be reinforced.

The silos should be preserved so that "people can reconcile with their pain," he said.

To assuage potential anger over the decision, the cabinet on Thursday tasked the interior and culture ministries with erecting a monument commemorating victims of the explosion.

Authorities say the blast was caused by a shipment of ammonium nitrate fertiliser that caught fire after being impounded for years in haphazard conditions.

Investigations into the tragedy have been paused for months over what rights groups and relatives of the victims have decried as political interference.