The adoption of NFT art in Lebanon seems to be a milestone for artists. 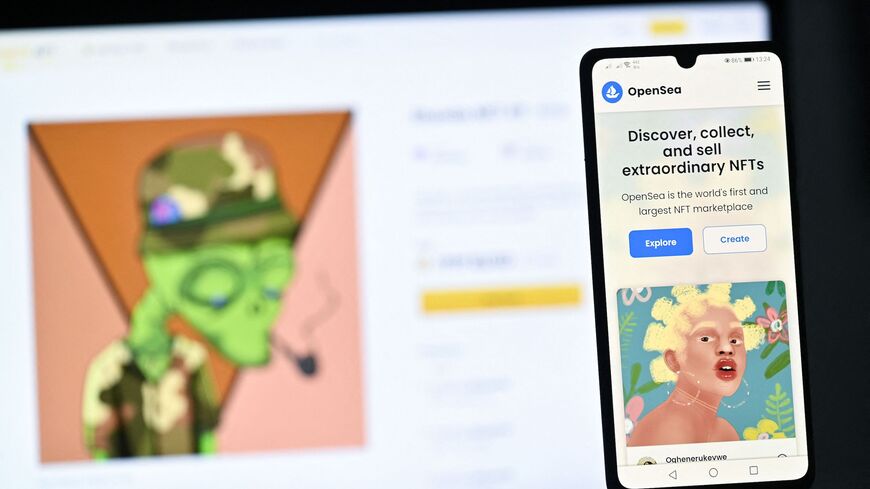 Artists across Lebanon are increasingly diving into the world of nonfungible tokens (NFTs), which are digital tokens that can be thought of as certificates of ownership for virtual assets.

They cannot be traded or exchanged as each is unique. Hence, NFTs are different from cryptocurrencies as they’re nonfungible, meaning the value of one NFT is not equal to another because each NFT is a unique, one-of-a-kind digital item — unlike a Bitcoin or an Ethereum, which are interchangeable as they hold the same value.

For Lebanese artists, NFT art has transformed their careers for the better by opening a global opportunity and offering higher exposure to their artwork while allowing them to break boundaries in their form of art. This has proven to be of crucial importance for small-scale artists in the country.

Grace Hasrouny, a 21-year-old digital media graduate, is one of Lebanon’s many artists using digital means to both create and sell her work.

Hasrouny had already been familiar with digital art, but when NFTs became more popular, she turned into a full-time NFT artist after educating herself on how artists can make a living through the nonfungible tokens.

“At first people did not understand that I sell jpegs for a living; even my family wouldn’t believe it was true until my NFT art pieces sold out and I cashed out my money,” Hasrouny told Al-Monitor.

When purchasing NFTs, people can buy the piece of art in a file form such as a jpeg, gif, png, mp3 and mp4. Hasrouny sells her art pieces as jpegs.

Back in March on Women’s International Day, Hasrouny released her first NFT collection on OpenSea, an online marketplace that allows the buying and selling of NFTs.

Her collection represented women in modern times, attracting NFT buyers (known as collectors) from all over the world to purchase her digital art pieces.

“The collection did great; it sold out in 10 days,” she said.

One of Hasrouny’s main motives to delve into the world of NFTs was the extensive emotional support she received from other NFT artists in Lebanon. At the same, witnessing collections of other NFT artists sell out inspired her.

“I wanted to monetize my art, and I found that selling NFT pieces on OpenSea is the way I can make this happen,” she added.

The entire NFT space is a huge opportunity for Lebanese artists, as many are making a living out of creating and selling pieces.

Ralph Khoury, also known by his art name, Ginger Porter, told Al-Monitor about his career transformation from being an interior architect to a full-time NFT artist. “For the past three years, I’ve been creating digital art pieces and working on growing my online family on social media platforms. But I realized that I was not making a living out of my art.”

“Eventually I found my way into NFT art, and I thank God for it,” he added.

For Khoury, NFT art is all he does now. He admits that the profit made in a few months by selling NFT art pieces would have taken him years to make in a traditional nine-to-five job in Lebanon.

“No one that I know among the artists in Lebanon who have entered the NFT space has regretted it. They all seem to be more optimistic and motivated to invest their time in creating more and more NFT art pieces,” Khoury added.

The first physical meeting was held by NFT artists in Lebanon who call themselves “The Lebanese NFT community.” A second meeting was held on a larger scale, proving that despite the social and economic challenges in Lebanon, artists and creatives are still working hard to overcome these challenges.

Lebanese NFT artist Patrick Ferzly told Al-Monitor, “It’s very life-changing for Lebanese artists as there is a lot of talent in Lebanon that has been undermined as it lacked access to global exposure. However, OpenSea is giving them more opportunities to sell their work at a valuable price.”

For Ferzly, one of the most important aspects of succeeding in NFTs is to build connections with the existing community of Lebanon’s NFT artists.

Besides empowering small-scale artists and reshaping the world of art, NFTs have considerable strength in the message sent out by being inclusive and accessible to all.

“Creativity in times of crisis is challenging, but having your work appreciated, loved and bought by strangers from around the world is the most rewarding and encouraging thing,” Nour Khoury, a 23-year-old Lebanese artist, told Al-Monitor.

For so long, he was hesitant to go into NFT art as it was difficult to accept the idea of an online marketplace (OpenSea) to sell digital art pieces, having originally been a traditional artist.

He recalls that before the idea of NFTs took off, traditionally painted art pieces would rarely sell, especially in Lebanon where people are facing severe financial struggles.

He told Al-Monitor, “In the beginning, I thought NFT was shifting the art industry into a different direction as it was something new and accessible to everyone.”

“Being a traditional artist in Lebanon nowadays comes with severe challenges as the soaring prices of art products are discouraging, making it difficult to get your hands on everything you need as an artist,” he added.

Therefore, for him, moving to digital art was better as it offered him a space to be creative but with fewer obstacles involved.

“In Lebanon, it is difficult to sell art pieces for a valuable price. But with NFT art pieces being listed on global platforms like OpenSea, it brings you to a whole other market,” he said.

Recently, the first coffee shop to introduce NFTs in the MENA region and the world, located in Lebanon, released its NFT art collection on OpenSea.

In 2018, B.Hive was established as a coffee shop in the heart of Beirut with the aim of building a community with its customers. It recently began creating NFT collections to maintain and replicate this existing community by bringing their customers to virtual art as most of them have settled in places all over the world.

The embracement of the NFT space in the country continues to grow with plans being considered to hold a physical exhibition to show NFT art pieces done by Lebanese artists for the summer of 2022, which for NFT artists and enthusiasts in Lebanon is a significant move as it is a way of shining a light on the steadily flourishing market.

Artists in Lebanon are using the OpenSea platform to mint their NFTs, which is the process of publishing their digital assets on the blockchain to make it purchasable. Digital assets refer to any file that is created electronically, meaning it can be an image, video, music or otherwise. Converting these electronic files into an NFT is known as minting.

Lebanese artists seem to be grateful for the NFT marketplace, mainly OpenSea, as it guarantees ownership of the digital assets while offering security and loyalty for the creator’s works. This is because the blockchain verifies and tracks each NFT posted, and since every NFT has a unique hash, it makes it impossible to duplicate.

OpenSea is by far the most popular and largest NFT platform in existence today, and for artists in Lebanon, it’s a “strengthening” marketplace platform. Artists are using the platform to mint their NFTs, create collections, set fees on their tokens and create auctions to sell them.