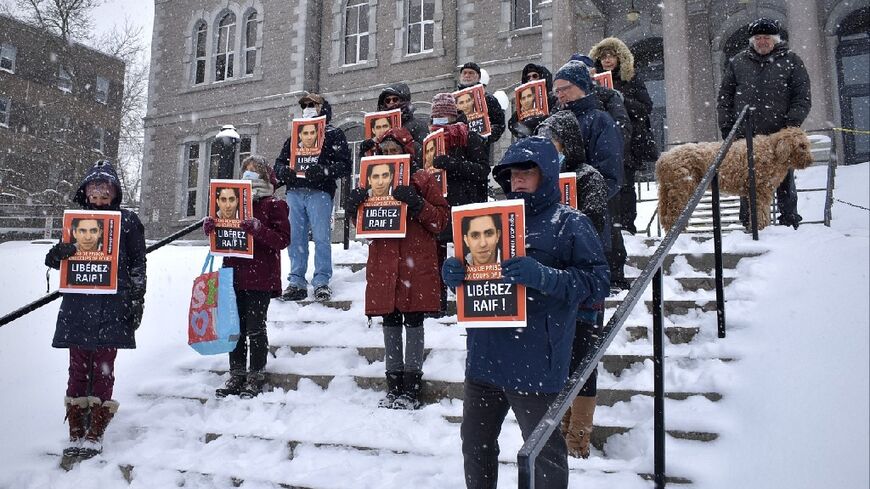 Saudi blogger Raif Badawi, seen on pictures held by supporters at a February 2022 vigil in Montreal, has been released after serving a 10-year sentence in Saudi Arabia - Geneviève NORMAND
by Geneviève NORMAND
March 11, 2022 — Montreal (AFP)

After 10 years in prison for "insulting Islam," Saudi blogger and human rights activist Raif Badawi, who has become a symbol of freedom of expression around the world, was released on Friday.

"Raif called me. He is free," his wife Ensaf Haidar, who lives in Canada with their three children and had been fiercely advocating for his release, told AFP.

Badawi's release was also confirmed by a Saudi security official, who said on condition of anonymity that "he was released today."

"I jumped when I found out. I couldn't believe it. I can't wait to see my dad, I'm so excited," one of his daughters, Nawja Badawi, 18, told AFP.

The winner of the Reporters Without Borders prize for press freedom was arrested and detained in Saudi Arabia in 2012 on charges of "insulting Islam."

His first flogging in Jeddah square in Saudi Arabia shocked the world and was described by the United Nations as "cruel and inhuman." After the outcry, he was not lashed again.

"Thousands of you have mobilized alongside us in the defense of Raif Badawi for 10 years. A big thank you to all of you for your tireless support."

Colette Lelievre, a Montreal-based campaign organizer with Amnesty who has worked on Badawi's case, said his release was "a great relief."

"Ensaf was at a loss for words," Lelievre said Friday. "She worked so hard to free her husband that emotions overwhelmed her."

Every Friday for almost seven years, Haidar -- who fled to Canada after Badawi's arrest and has since become a Canadian citizen -- held a public vigil for him. 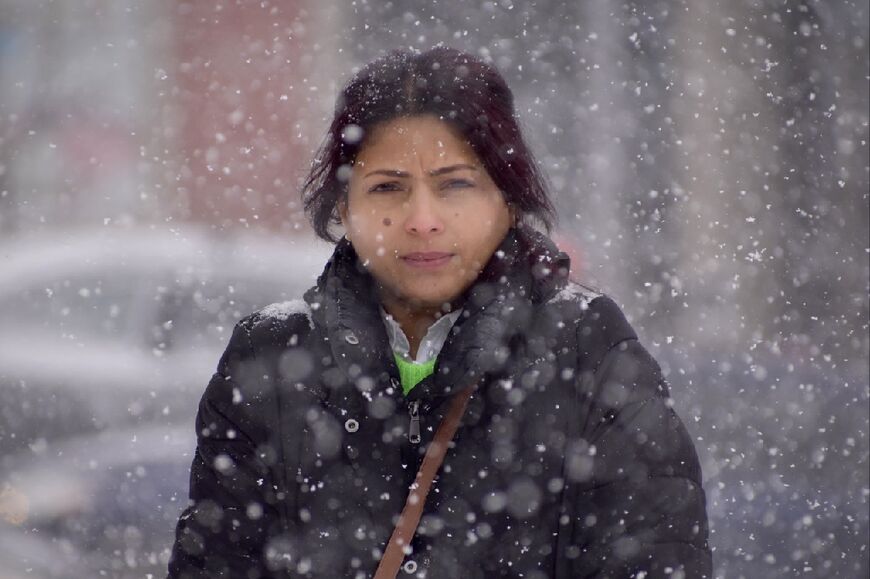 She told AFP in late February at the 374th vigil in Sherbrooke, Quebec where she lives that she'd been able to maintain contact with her husband, speaking with him "up to three times a week" by telephone.

Canada's Quebec province has paved the way for Badawi to come to the country if he chooses by placing him on a priority list of potential immigrants for humanitarian reasons.

"Finally!" Quebec Premier Francois Legault tweeted Friday about his release, adding: "I keep thinking about the children who will finally see their father!"

No details of Badawi's release conditions were immediately available.

But Amnesty noted that the Saudi blogger could still face a 10-year ban on all travel outside Saudi Arabia, as this had been part of his original sentence.

The NGO added in an email to AFP that it would "actively work to have any conditions lifted."

Canadian Prime Minister Justin Trudeau tweeted that he was "relieved that Raif Badawi has finally been released."

"Our officials are now working to seek clarity on the conditions of his release," he added.

Irwin Cotler, a former Canadian justice minister and Badawi's international legal counsel, said in a statement he hoped that "Saudi authorities will compassionately allow for his reunification with his wife and young children in Canada."

International non-governmental groups and the United Nations continue to denounce the repression of dissenting voices and the imprisonment of activists in Saudi Arabia, despite the kingdom's efforts to improve its image by undertaking certain reforms.

A Sunni Muslim like most Saudis, Raif Badawi studied economics and ran an institute for learning English and computer skills, according to his wife.

Known for his writings in support of freedom of expression, the blogger won the 2014 Reporters Without Borders prize in the net-citizen category.

He was also awarded the Sakharov Prize for Freedom by the European Parliament in 2015, and in 2015 and 2016, he was among the nominees for the Nobel Peace Prize.