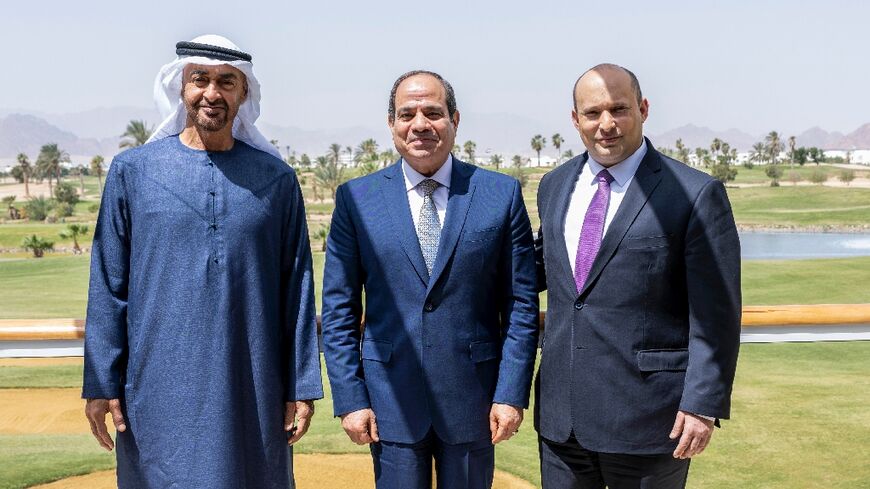 It comes nearly a month after Russia invaded Ukraine in a move that sparked concerns about security and sent prices of oil, wheat and other key commodities soaring.

Egypt, Israel and the United Arab Emirates are allies of the United States but they have so far avoided taking positions against Russia over its war on Ukraine.

"Against the backdrop of the recent developments in the world and the region, the leaders discussed the ties between the three countries and ways to strengthen them on all levels," said a statement from Bennett's office.

It was the first summit of its kind, and signalled "a new doctrine" of regional diplomacy championed by the UAE, said Mustafa Kamel al-Sayyid, a professor of political science at Cairo University.

Bennett and Sheikh Mohammed had arrived in Egypt on Monday.

Israeli media said the leaders would also discuss reports that Iran and Western powers, including the United States, are close to a deal to revive the 2015 nuclear accord.

Bennett is vehemently opposed to the deal which is designed to prevent Israel's arch foe Iran from acquiring an atomic bomb -- a goal the Islamic republic has always denied.

The Israeli leader on Sunday appealed to the United States not to remove Iran's Islamic Revolutionary Guard Corps from its blacklist of foreign terrorist organisations as part of a renewed deal.

Bennett also travelled to Sharm el-Sheikh in September last year, in what was the first visit in over a decade by an Israeli head of government.

Egypt was the first Arab country to sign a peace treaty with Israel in 1979, after decades of enmity and conflict.

In 2020, the UAE became the third Arab country to forge diplomatic ties with Israel, under a series of US-brokered deals known as the Abraham Accords.

"The UAE is interested in exporting the framework of the Abraham Accords to the rest of the Middle East," Sayyid told AFP, adding the accords addressed more than "just security ties".

For Sayyid, Tuesday's meeting was the real-world application of this approach.

In contrast with Egypt, which has focused predominantly on strong military and strategic ties with Israel, the UAE has hit the ground running on robust economic relations.

Within the first year of establishing diplomatic ties, the two regional heavyweights had agreed a raft of deals ranging from tourism and aviation to cutting-edge technology.

It also addressed "the importance of cooperation and coordination to drive development and enhance stability in the region, as well as bolstering global energy security and market stability."

The three leaders also "exchanged views on a number of regional and global issues of mutual concern and relevant developments," said WAM.