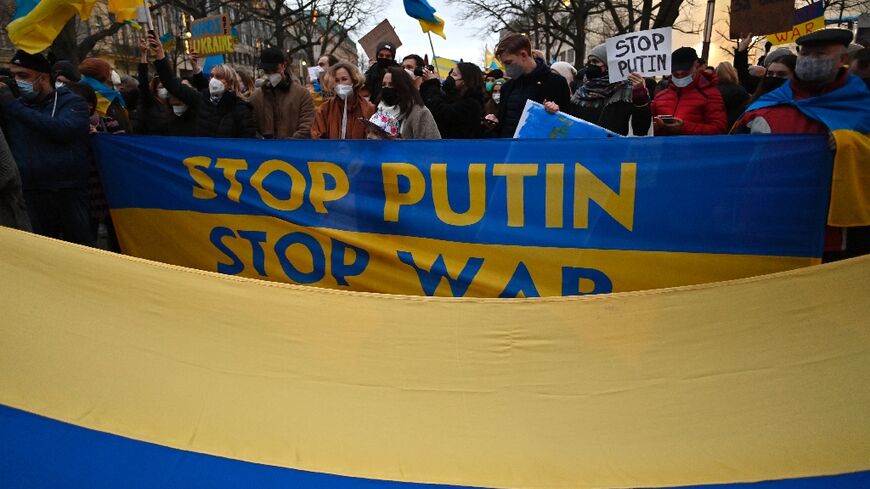 Russia's invasion of Ukraine sent oil prices above $100 a barrel and pummeled European equities on Thursday, while Wall Street stocks finished solidly higher after rebounding during the session.

Both Frankfurt and Paris shed as much as five percent during a brutal round of trading, as investors fled risky equities, while haven investment gold rose to over $1,923 per ounce.

"The crisis atmosphere in Eastern Europe, meanwhile, could thrust central banks back into support mode if stocks continue to falter."

In reaction, oil rocketed, with European benchmark Brent prices briefly cruising past $105 per barrel for the first time since 2014, while aluminium and wheat surged to record peaks on fears output from major exporter Russia would be disrupted.

"The latest twist in the Russia-Ukraine crisis is likely to keep commodity prices elevated over the coming weeks and months," analysts at Capital Economics said.

"And if the situation spirals into a more serious and wide-ranging conflict between Russia and the West, commodity prices could rise further from here."

IMF Managing Director Kristalina Georgieva warned the conflict would have repercussions for the global economic recovery.

Among the new sanctions on Russia announced by US President Joe Biden were measures to target the country's two largest banks as well as controls on high-tech items aimed at crippling its defense and aerospace sector.

Frankfurt stocks finished four percent lower, and both London and Paris ended the day with a loss of 3.8 percent, as fears grew of a broader conflict.

Asian equities plunged, with Hong Kong, Sydney, Mumbai, Singapore and Wellington down at least three percent, while there were steep losses in Tokyo and Shanghai.

Wall Street stocks began their session deep in the red, but later rebounded to end a four-day losing streak, with the broad-based S&P 500 winning 1.5 percent.

"We were definitely oversold and due for a bounce," said Tom Cahill of Ventura Wealth Management. "I think there was a 'buy the rumor, sell the news' waiting to happen, and... it kind of fed on itself."

Briefing.com also said the rebound in New York was due partly to Biden's sanctions announcement, which "weren't as severe as some were thinking (or hoping.)"

So-called "safe haven" currencies like the dollar and the yen pushed higher. The Russian ruble plunged.

Companies with the biggest presence in Russia were among those whose stocks were hammered.

Shares in Russian metal giants Polymetal and Evraz tanked by 38 percent and 30 percent, respectively, in London.

"With tough incoming sanctions expected, their businesses are likely to take a major hit with little respite in sight given the seriousness of the situation," said Hargreaves Lansdown analyst Susannah Streeter.

French carmaker Renault, which owns a majority stake in Russia's Avtovaz, the maker of the Lada, saw its shares skid about nine percent.