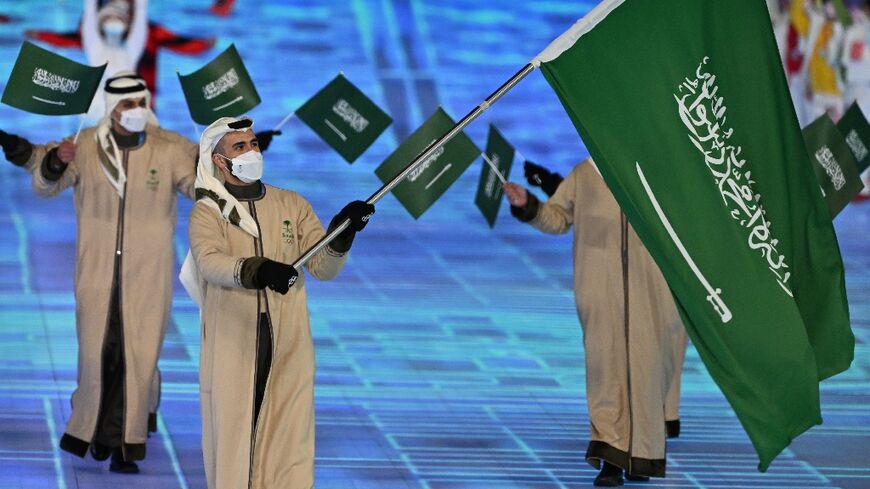 An Olympic alpine ski racer from Saudi Arabia might read like a misnomer, but Fayik Abdi defied the odds by achieving just that on Sunday.

Just a year after taking up racing, Abdi successfully competed in the men's giant slalom at the Beijing Games in the first step to what he hopes will be an Arab revolution of the truly snowy kind.

Abdi is the sole representative from the Gulf kingdom, not known so much for its mountain pistes as the vast hinterlands of the Empty Quarter, the vast Rub' al-Khali desert in the southern part of the Arabian Peninsula.

The 24-year-old's introduction to skiing, needless to say, did not start in his homeland, but instead Lebanon, where he spent many winters as a child.

Winter camps in Switzerland followed before Abdi upped sticks in 2016 to the US state of Utah, where he further honed his skills.

He graduated from the University of Utah in Salt Lake City four years later, returning home "hoping to make a connection between skiing and Saudi Arabia".

Abdi said he was approached by authorities in the new city of Neom, in northwestern Saudi Arabia on the border with Jordan, to test snow conditions ahead of the construction of a ski resort in mountains there.

"I could never imagine I would be able to ski in Saudi Arabia," said Abdi, who last year was fast-tracked by the country's wintersports federation for participation at these Games, taking part in qualifying races in Austria, Sweden, Italy and Montenegro.

"I lived in Saudi for 10 years and Saudi does have snow, we just don't have enough snow to be maintained for skiing."

To compensate, two huge indoor ski complexes are planned for the capital Riyadh and the Red Sea port city of Jeddah.

"But they are building something similar to this (Yanqing) in the north-west of Saudi. I was there, I have already skied in Saudi, so it's definitely possible."

In testing conditions including heavy snowfall and limited visibility, Abdi finished 51st out of 54 finishers in the first leg of the giant slalom, more than 18 seconds slower than Swiss leader Marco Odermatt. Thirty-three racers failed to finish.

"Our goal wasn't just to finish, our goal was to ski as best as we could," Abdi said.

"I am happy I tried my best. It could have gone better for sure. The fact we finished is definitely a plus."

The Saudi insisted his result was much more than an individual goal.

"I am really proud to be here representing Saudi and I think this is a sign of the direction Saudi is moving. It has changed a lot in the last few years and it's going to continue to change.

"There are many Saudis in different sports doing things for the first time. It's part of the plan, part of Vision 2030."

That vision has seen Saudi Arabia host a raft of other sports such as Formula One, the Dakar Rally, high-profile football, cycling, Formula E and boxing events.

Saudi officials argue that they come within the remit of the country's "Vision 2030" to increase its openness.

But there has been criticism from human rights organisations amid accusations of "sportswashing" -- using sport to divert attention away from not only domestic rights issues but also Riyadh's involvement in Yemen's seven-year war which has left hundreds of thousands of people dead and millions more displaced in what the UN calls the world's biggest humanitarian crisis.

But that was not on Abdi's mind as he finished ahead of skiers from Timor-Leste, India and Jamaica.

"The more diverse the sport, the better the sport," he said.

"This is the beginning, not just for Saudi Arabia but for many nations and hopefully in the future we see more countries and more teams contending."