Many Egyptians see gold as the safest investment option for their savings, especially in times of economic uncertainty. 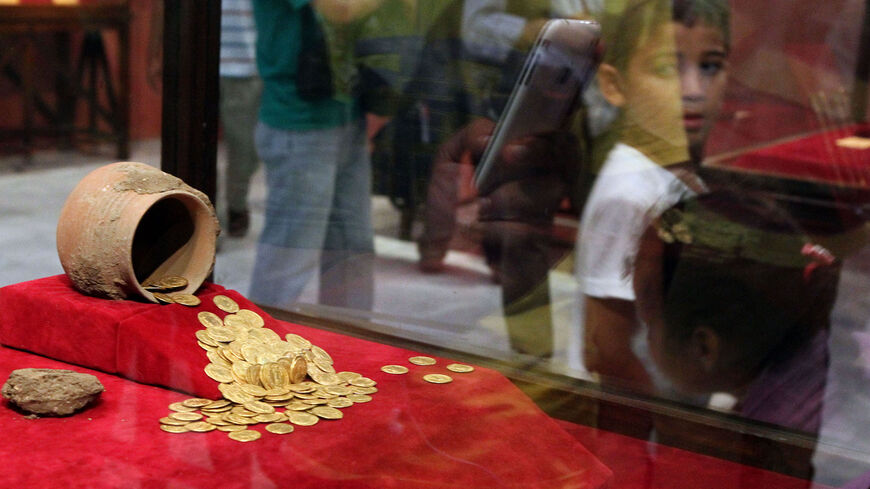 A boy looks at the coins displayed at the "Coins through the Ages" exhibit at the Egyptian Museum in Cairo Aug. 10, 2010. - KHALED DESOUKI/AFP via Getty Images

According to a report by the World Gold Council, spending on gold jewelry increased by 60% during the first nine months of 2021, compared to the same period last year. Egypt registered about 2% of global spending on gold.

The uptick is due to rising demand for gold as a safe investment option in light of the Central Bank's interest rate cuts to 8.25% for savings and 9.25% for loans, as well as a stable exchange rate for the Egyptian pound against the US dollar.

There is an inverse relationship between gold and economic confidence levels. The more the economy improves, the lower the gold prices. Rafiq Abbasi, head of the gold industry division of the Federation of Egyptian Industries, told Al-Monitor, “In the coming period, with the emergence of infections with the omicron variant and some countries making lockdown decisions, the worldwide economy is expected to witness  regression, which will lead to a rise in gold prices. Now is the time to buy gold, before prices rise.”

Abbasi explained that gold is a better investment option than others and that private citizens, banks and business "all seek to buy gold to preserve the value of their assets in case of economic regression." He said, "Egyptians have always had an appetite for gold" driven by the lack of public health insurance and unemployment support as well as fear of future price fluctuations.

He pointed out that Egyptians buy gold for both adornment and saving purposes. “Those who buy gold for the purpose of increasing their savings buy used jewelry, since it is not subject to the gold tax and is cheaper than new items. They sell their gold when the price soars,” he explained.

“Gold keeps its value,” Egyptian investor Manal Mahmoud told Al-Monitor. She noted that whenever she can afford to she buys gold, which she can sell in case of emergency. “I learned this from my mom,” she said.

Umm Ahmed, a housewife, told Al-Monitor that she always waits until the price of gold drops to make gold purchases, especially used jewelry because it has the lowest prices. “Investing in gold is the best way to save money," she said.

“Gold is a safe haven,” said Tariq Wafi, who owns a gold shop in Cairo's Al-Hussein district. He added in an interview with Al-Monitor that customers are increasingly likely to buy 24-karat gold bars and 21-karat gold coins than gold jewelry items because of their lower workmanship costs.

Another gold dealer on Al-Sagha Street, Ahmed Al-Jana, also told Al-Monitor that people prefer to buy used jewelry because it is not subject to Egypt's gold tax. “Used gold is old gold goods that only need polishing and cleaning. They are pieces bought from customers willing to sell and then sold again to other customers who are looking for this type of gold,” he said.

Egyptian investor Ahmed Youssef told Al-Monitor that years ago he went through financial hardships and his wife’s gold jewelry was their only salvation. “This is how I learned to buy gold as an investment whenever I can afford it. This is the only investment I have,” he noted.

In a phone call with Al-Monitor, Yemen al-Hamaki, a professor of economics at Ain Shams University, said that the Egyptians' growing desire to buy gold is justified. “This is due to the decline in interest rates in Egyptian banks and Egyptians’ constant uncertainty,” she said. “This has been a pattern followed by Egyptians during the past 20 years in the face of financial crises.”

Hamaki warned that the emergence of the omicron variant of the coronavirus will have a negative impact on the economy. She explained, “This will be reflected in the disruption of supply chains and the rise in prices, locally and globally. Those who have surplus money will keep buying gold, even more so in light of its current low price, and the economic inflation rate is likely to keep trending upward."