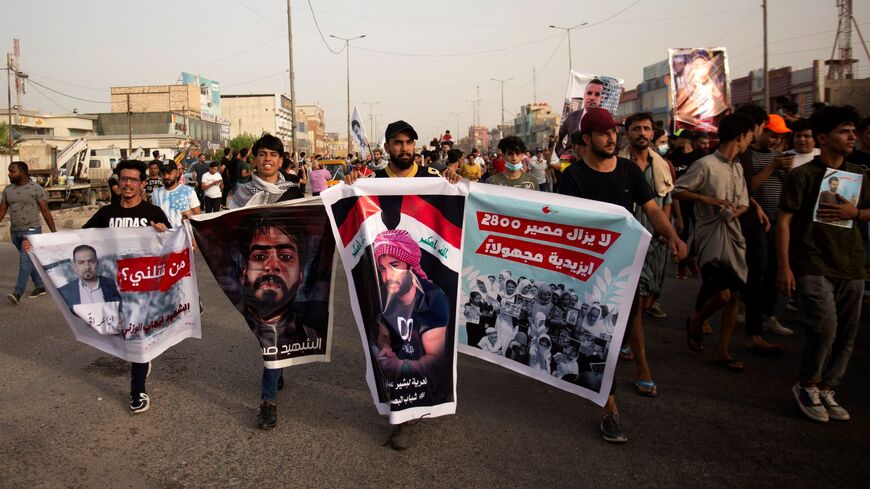 Iraqis demonstrate in the southern city of Basra on May 25, 2021, to demand accountability for a recent wave of killings targeting activists. Thousands of Iraqis demonstrated to demand justice over a wave of deadly attacks on pro-democracy activists and journalists. - HUSSEIN FALEH/AFP via Getty Images

BAGHDAD — Iraq’s Basra Criminal Court sentenced a second man to death on Nov. 1 for involvement in a death squad that killed multiple Iraqi journalists and activists. Another convict was also sentenced to death a day before for the same crime.

According to Iraqi security officials, Hamza Kadhim al-Aidani and Aqeel Hadi were arrested in early 2021 with other members who worked as part of a “network of 16 people responsible for assassinations.” Photos of the men under arrest were widely circulated today.

The court’s conviction is preliminary and subject to a 30-day appeal period.

The victims were Ahmad Abdessamad, an Al-Dijla channel news correspondent, and his cameraman, Safaa Ghali, who covered the 2019 protests in Basra. On Jan. 11, 2020, as they were driving home, another car pulled up next to theirs and opened fire, killing Abdessamad on the spot and injuring Ghali, who later died in the hospital.

After the court’s ruling, a video of Abdessamad’s mother expressing her satisfaction with the “righteous” verdict was shared on social media platforms.

During the 2019 mass protests, many took to the streets to protest against foreign interference in the country, lack of basic services and armed militias outside of state control. As a result, more than 600 were killed, 30,000 injured, and dozens of journalists and activists were systematically targeted.

Before his assassination, Abdessamad informed his followers on social media that he had received death threats from militias because of covering the protesters and criticizing Iranian-backed militias.

The Iraqi Supreme Judicial Council released a statement on Nov. 2 that the convicted felons “confessed to all the details of this crime with a motive of destabilizing the country and spreading terror in the hearts of people and demonstrators."

Aidani confessed to being the driver in the death squad responsible for killing Abdessamad. He said the squad also consisted of Ahmad Twaisia as the team leader, Abbas Hashim to track the victim and shooter Ahmad Abdul-Karim. Aqeel Hadi, another member of this squad, was allegedly responsible for killing Mujtaba Ahmad, a 14-year-old protester in Basra.

Only Aidani and Hadi have been arrested. The other members remain at large and have yet to be prosecuted.

A source in criminal court informed Al-Monitor that Aidani confessed that the squad received their orders from their superiors in KH to systematically target and kill activists, journalists and also members of Iraqi security forces. The superiors convinced their followers that the orders were fatwas issued by Iranian Supreme Leader Ayatollah Ali Khamenei.

The members of the squad worked inside different security forces institutes, using their positions and relations to carry out their operations.

The Iraqi government has replaced many security officials in order to counteract the influence of militia networks. Today, Prime Minister Mustafa al-Kadhimi dismissed the head of the Iraqi National Security Service.

Aidani, born in 1983, was a member of the judicial police in Basra and joined the PMU in 2014. He was an active member for 18 months and returned to the police force while maintaining contact with the PMU.

During today's Cabinet meeting, Kadhimi praised Iraqi judges and the Judiciary Council. “We pursued the murderous groups that were involved in the killing, and we succeeded in arresting the killers of the martyr Hisham al-Hashimi and Ahmed Abd al-Samad, and we will continue to pursue the killers and everyone involved in Iraqi blood,” Kadhimi said.

Hashimi was a prominent Iraqi security analyst who was assassinated by gunmen on motorcycles outside his home in the Iraqi capital in July 2020. One member of the assassination group was arrested earlier this year and recently sentenced to death.

“We support the independence of the judiciary,” Kadhimi said. “We do not seek revenge; rather, our main goal is to achieve justice.”