Egypt has opened its first open-air gym to encourage citizens to work out in open spaces. 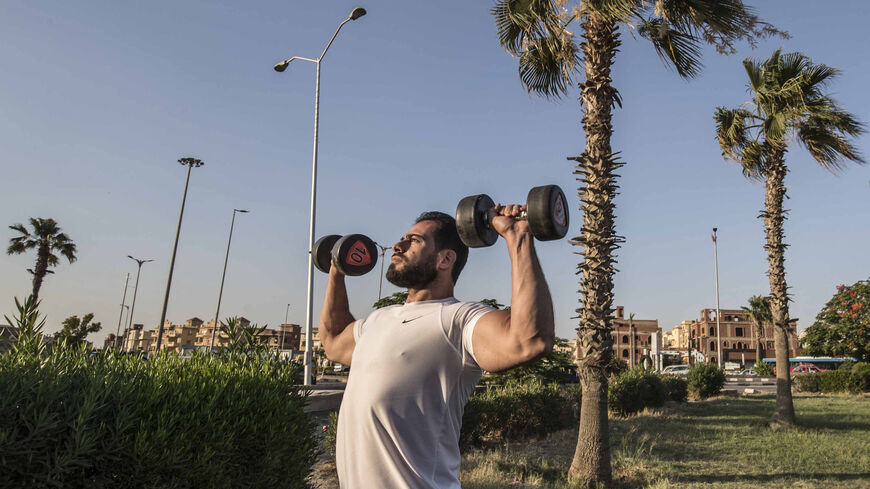 Bodybuilder coach Mohamed Nassim, a 33-year-old Syrian exile who settled in Cairo after escaping his war-torn country with the start of the conflict in 2011, takes part in a training session in a public park in 6th of October City in Giza governorate, on the outskirts of the Egyptian capital on June 15, 2020. - KHALED DESOUKI/AFP via Getty Images

CAIRO — Egypt's first open-air gym has opened in the city of El Obour, 30 kilometers (19 miles) northeast of central Cairo. On Nov. 7, the municipality announced the facility would be accessible to all residents in return for a nominal maintenance fee.

Head of the Obour City Authority Abdel-Raouf El-Gheity told Al-Monitor over the phone that the coronavirus pandemic has prevented people from exercising. He said the city decided to open Egypt's first open-air gym to offer residents a healthy and safe atmosphere to work out in and reception has been warm.

Gheity added that the municipality reached out to businesses and civil society institutions in the city for contributions to fund the needed equipment.

He said that the facility was established on a 70-acre green space and includes a four-kilometer two-way walkway and running track with benches every 100-150 meters, garbage baskets, lighting and a security system. The facility, he added, is open to women in the morning hours and men in the evening hours. He explained that a workout area has been fitted with 34 machines and secured with cameras, fences, lighting and guards.

Gheity said he was contacted by several entities wishing to bring the open-air gym experience to other cities.

Spokesperson for the Ministry of Youth and Sports Mohammad Fawzy welcomed Obour City's open-air gym as an out-of-the-box way to encourage citizens to work out while serving the state’s policies and interests. The step, he said, raises awareness of the importance of sports across the Republic.

He added that and even larger open-air gym will soon be inaugurated in the new administrative capital in coordination with sports groups such as karate and modern pentathlon federations.

Mahmoud Hussein, chairman of the Youth and Sports Committee in the House of Representatives, lauded the gym in line with the state’s directives in encouraging citizens to exercise in a healthy and safe atmosphere, maintain their health and mitigate the negative effects of the pandemic.

Hussein told Al-Monitor that open-air exercise facilities are common in European countries to encourage citizens to work out in open spaces amid the pandemic. He said this is a promising idea that will require work on the part of government, private and civil society institutions to spread it across the Republic.

He stressed that encouraging young people to work out is healthy for society. Therefore, he concluded, the Parliament’s Youth and Sports Committee, in coordination with the Ministry of Sports, will work to spread the open-air gym experience and outdoor exercise in general across the country.