The main defendant in the case, Salah Abdeslam, told the court on Wednesday that he was a "soldier" of the Islamic State. 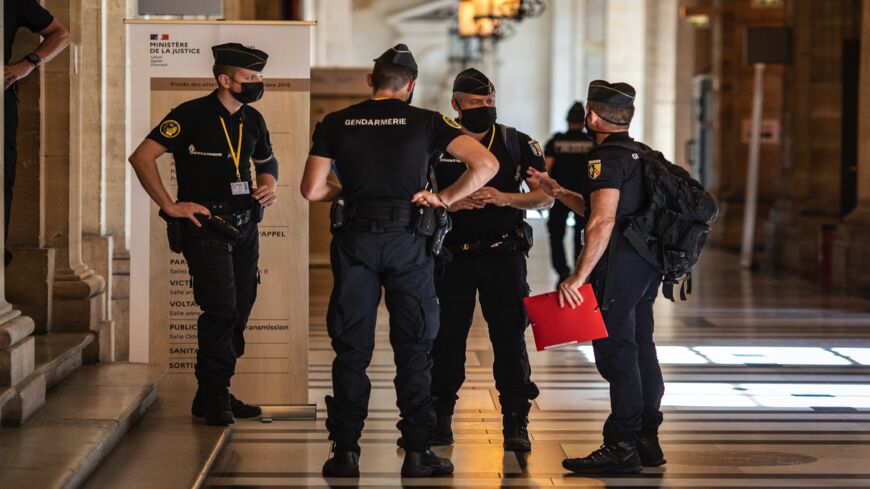 French gendarmerie stand close to the courtroom where the trial of the 2015 terror attack in Paris will take place, Sept. 7, 2021, at the Palais de Justice in Paris, France. In November 2015, three teams of jihadis launched a suicide bombing and gun assault on bars, restaurants and the Bataclan concert hall, killing 130. The Islamic State claimed responsibility for the attacks, which were allegedly planned from Syria. - Siegfried Modola/Getty Images

France on Wednesday opened the criminal trial of 20 people accused of involvement in the deadly Islamic State (IS) attacks in Paris that killed 130 people and injured more than 400 others nearly six years ago.

In what was the largest attack on French soil since World War II, nine gunmen and suicide bombers on Nov. 13, 2015, attacked the Bataclan music hall, a football stadium, and half a dozen bars and restaurants in the heart of Paris.

IS, then in control of large parts of Iraq and Syria, claimed credit for the massacre in the French capital. The terrorist group had previously urged its supporters to attack France and other European countries over their involvement in the US-led coalition battling IS.

Prosecutors say Salah Abdeslam, a 31-year-old Belgian-born French national, was the sole surviving attacker. After driving a group of the attackers to the stadium on the night of the attacks, Abdeslam is believed to have ditched his car and suicide vest in northern Paris before fleeing to neighboring Belgium.

He remained at large until March 2016, when an international manhunt ended with Abdeslam’s arrest in Brussels. The next month, he was extradited to France, where investigators say he has refused to answer their questions about the attacks.

Abdeslam, who appeared in court Wednesday wearing a black shirt and black mask, is charged with taking part in a terrorism-related murder and participation in a terrorist organization.

He told the court when asked about his profession, “I gave up my job to become an Islamic State soldier."

Nineteen other suspected IS supporters face terrorism-related charges for allegedly supplying weapons or transportation to the Paris attackers or providing other logistical support to the network. Among that group, six defendants will be tried in absentia — five of whom are presumed dead. The proceedings are expected to take nine months and involve more than 300 lawyers and nearly 1,800 plaintiffs.