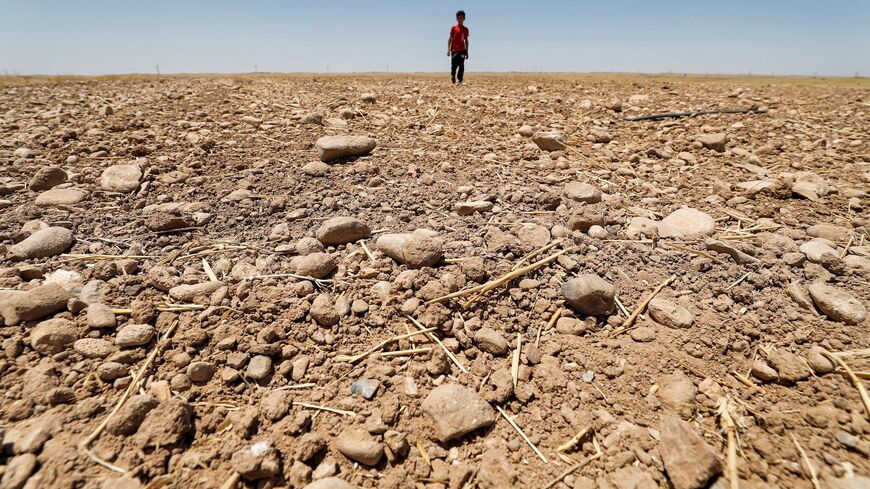 A boy walks through a dried up agricultural field in the Saadiya area, north of Diyala in eastern Iraq on June 24, 2021. - AHMAD AL-RUBAYE/AFP via Getty Images

A water crisis in Syria and Iraq has put more than 12 million people at risk of losing access to food, water and electricity, a group of aid organizations said on Monday, warning the shortages could lead to further displacement in the already unstable region.

A new report published by 13 international aid groups, said that higher temperatures and drought are depriving people of drinking and agricultural water, as well as disrupting electricity as dams run out of water in Syria and Iraq. Climate change has increased the risk and severity of droughts in both countries, the report said, adding that roughly 400 square kilometers of agricultural land risks total drought.

“The total collapse of water and food production for millions of Syrians and Iraqis is imminent,” said Carsten Hansen, the Norwegian Refugee Council’s regional director.

“With hundreds of thousands of Iraqis still displaced and many more still fleeing for their lives in Syria, the unfolding water crisis will soon become an unprecedented catastrophe pushing more into displacement," Hansen said.

The reduction of water has led to an increase of waterborne diseases such as diarrhea in communities across Syria, including in Hassakeh, Aleppo, Raqqa and Deir ez-Zor.

Iraq, meanwhile, is experiencing the second-driest season in 40 years amid record-low rainfall, which has left large stretches of farmland, fisheries and power production depleted of water. The water shortages from the Euphrates and Tigris Rivers are threatening the lives of at least seven million people in Iraq, the report said.

The aid groups estimate that wheat production will decrease by 70% due to the drought in Iraq’s northern Nineveh governorate. The Kurdistan Region of Iraq is expected to see its wheat production cut in half as a result of the water crisis. In Iraq’s western Anbar province, some families without access to river water are spending up to $80 a month on water.

The aid groups, which included Mercy Corps, CARE and War Child, urged regional authorities and donor governments to take immediate action or the “water crisis is bound to get worse.”

“There is no time to waste,” the Danish Refugee Council’s Middle East Regional Director Gerry Garvey said. “We must find sustainable solutions that would guarantee water and food today and for future generations.”