Security Council report red flags Uyghur diaspora in Turkey as a recruitment source for jihadi networks in Syria and Afghanistan. 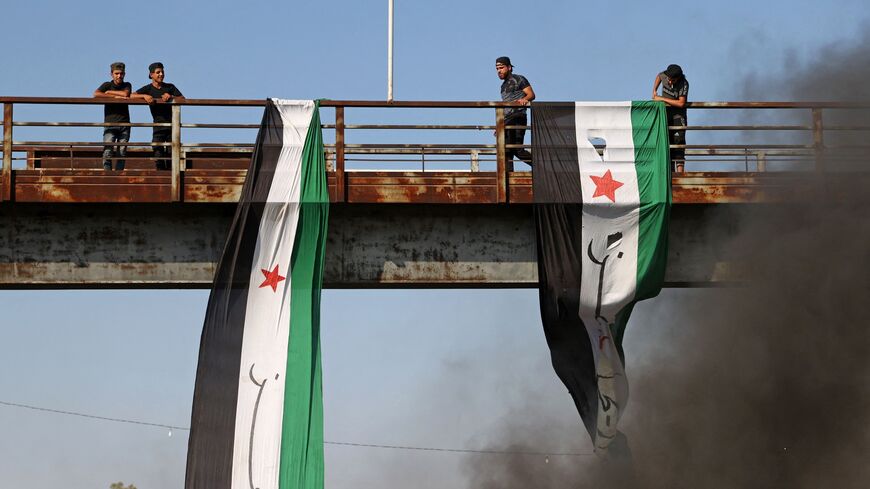 Syrians hang opposition flags as smoke billows from burning tires on the M4 highway to protest Ankara's perceived inaction over the latest Syrian regime attacks, in the town of Ariha in rebel-held northwestern Syrian province of Idlib on July 25, 2021. Also, a recent UN Security Council report says, "Idlib remains a strategic location for [Islamic State] fighters and family members, in particular as a gateway to Turkey." - OMAR HAJ KADOUR/AFP via Getty Images

On July 15, a report submitted to the UN Security Council by the council's committee working on the Islamic State (IS) and al-Qaeda documented the resilience of jihadi militant networks. The 22-page report looks at the activities of these networks in five different regions during the first six months of 2021. Turkey is only mentioned in the Iraq and Levant section, but its unique relations with foreign fighters raise concerns for domestic and international security.

Foreign fighters not only help keep the idea of a universal holy war alive, but they are one of the reasons why militant jihadi movements have survived despite global efforts. Militant jihad is based on a network of career fighters who move from one war zone to another. Since the beginning of Syrian civil war in 2011, Turkey’s proximity to the battle zones and desire to topple the Syrian regime meant that in the early years of the conflict Ankara turned a blind eye to foreigners traveling to Syria, and over time enabled logistics support to multiple networks.

When asked about the July 15 Security Council report, a senior Turkish government official working for the security establishment told Al-Monitor, “It does not mean much. We did what we were required to do in alliance with Western countries. Thousands of foreign fighters originated from Europe, why did they allow them to travel to Syria? Now they do not want them back and try to assign the responsibility on us.”

By the end of July, the US Treasury Department made designations against a Turkey-based al-Qaeda financial facilitator and a Hayat Tahrir al-Sham recruiter and terrorist fundraiser, and issued sanctions accordingly. The US has been repeatedly tracking jihadi networks, mostly linked to IS, and issuing sanctions. In a report in early January, the department red-flagged Turkey for having “logistical hubs” that facilitate the transfer of money in and out of Syria. Several Turkish and foreign-born individuals residing in Turkey have been identified and sanctioned by the Treasury.

The United States also imposed sanctions on a Turkey-backed group in Syria, Ahrar al-Sharqiya. The Security Council report and those from other agencies repeatedly raise concerns about Turkey’s relations with jihadi networks. Ahrar al-Sharqiya was responsible for the brutal execution of female Kurdish politician Hevrin Khalaf.

The Security Council report also highlights the Uyghur diaspora in Turkey as well as the Eastern Turkistan Islamic Movement’s links with Hayat Tahrir al-Sham. Uyghur fighters who have joined the jihadi militant networks in Syria tend to be older and poorer compared with other foreign fighters. Most of them have fled from China and arrive in Syria and Iraq with their families. Uyghur foreign fighters have been particularly praised by jihadi networks for their commitment to raising young fighters. Uyghur exiles have settled in waves in various Turkish cities since the 1950s. Unlike other refugees, Uyghurs are well received and integrated.

In 1993, as the mayor of Istanbul, Recep Tayyip Erdogan dedicated a park in the memory of Eastern Turkistan "martyrs." During the opening he said, “Eastern Turkestan is not only the home of the Turkic peoples, but it is also the cradle of Turkic history, civilization and culture. To forget that would lead to the ignorance of our own history, civilization, and culture. The martyrs of Eastern Turkestan are our own martyrs.” Erdogan’s political career has been based on his mastery of idealism and pragmatism.

Although they are an understudied group among jihadi foreign fighters, why was the Uyghur diaspora in Turkey mentioned specifically at this Security Council report?

Colin Clarke, the Director of Policy and Research at the Soufan Group, told Al-Monitor, “I think the report references the strength of the diaspora in Turkey to give a more comprehensive picture of the threat. It’s not just about the active foreign fighters, but the broader support network is also critical. Diasporas have long sustained terrorist groups, even small ones, with both active and passive support, including weapons, training, safe haven, financing, etc.”

After emphasizing the need to separate the fighters from Uyghur refugees who have been living peacefully in Turkey for decades, Suleyman Ozeren, a senior expert at Orion Policy Institute and adjunct professor at George Mason University, told Al-Monitor, “Turkey, under AKP governments, has become a transit route, then a hub for logistical and recruitment sources, and finally a destination country for the returnee jihadists.” Ozeren added that “the situation has not changed despite one or two ‘timely’ operations against IS.”

He explained Ankara’s mindset as follows: “The AKP has considered support for the jihadists — whether through open and direct support during the heydays of the conflict or rebranding and regrouping the same jihadists under different banners — as an extension of its foreign policy. At the domestic level, the counterterrorism strategy has become a tool to silence dissent rather than seriously addressing the returnee jihadist problem. The Turkish security establishment in recent years has been surprisingly lenient and tolerant toward IS members and, more importantly, returnee foreign fighters, which has been confirmed and reiterated by several human rights and research institutions.”

Analyzing the importance of the Uyghur fighters, Clarke emphasized that “from an operational perspective, it remains unclear to me exactly how important Uyghur foreign fighters are to groups like [Hayat Tahrir al-Sham] and Hurras al-Din. On the one hand, featuring Uyghurs in jihadist propaganda can show a diversity of fighters and make these groups seem more representative of a broad swath of nationalities than they are. One big question is, how much of what we hear about the Uyghur threat is driven by threat inflation from Beijing, which is attempting to use the Uyghur issue as top cover to continue pursuing draconian policies in Xinjiang," the autonomous territory in northwest China that's home to most of the country's Uyghur minority.

Aykan Erdemir, senior director of the Turkey Program at the Foundation for Defense of Democracies and a former member of the Turkish parliament, told Al-Monitor how perplexing it has been to observe Uyghur involvement in Syria since 2012. “The Erdogan government often chooses to look the other way about Beijing’s brutal treatment of the Uyghur minority in China in exchange for economic inducements; it has also provided the most radical Uyghur elements in Syria indirect support behind closed doors." While Erdogan has stressed in calls with his Chinese counterpart Xi Jinping Ankara's belief that Uyghurs have full rights in China, he also noted "respect for China's sovereignty and territorial integrity."

Erdemir added, "Overall, Ankara has hurt the Uyghur cause by being complicit in Beijing’s crackdown on democratic Uyghur opposition, while siding with a small group of fringe elements in Idlib and elsewhere in Syria. Therefore, the Erdogan government’s misguided policies have been a blessing for Beijing’s propaganda against the vast majority of Uyghurs who are dedicated to democratic opposition to China’s egregious violations of their rights and freedoms.”

Erk Acarer, an investigative journalist and columnist for Turkey’s independent Birgun newspaper, told Al-Monitor over the course of the Syrian civil war different groups have formed and Uyghurs, along with other Central Asian foreign fighters, had the advantage of Turkish language for easier transition in and out of Turkey. “What is intriguing,” said Acarer, is that "the AKP is not bothered with the radical Islamists, including Central Asians, but while in alliance with ultranationalists they also fail to see the alleged suffering of Uyghurs under Chinese oppression. This is because Turkey is dependent on China for economic relations.” Turkey’s relations with China makes it more important to understand the reach of the Uyghur diaspora.

Ali Ergin Demirhan, editor of Sendika.Org news outlet, conducted extensive research on foreign fighters and jihadi networks in Hatay province of Turkey for seven months in 2016. Hatay borders Syria and has been one of the most important hubs for foreign fighters. Demirhan told Al-Monitor, “After March 2016, as the balance in the Syrian war theater changed, so did Turkey’s surveillance of the foreign fighters in the region. Once the Syrian armed forces started making gains, foreign fighters started seeking refuge in Turkey. If these foreign fighters have left war zones, they would be prosecuted for disregarding passport rules and be coded as ‘foreign terrorist fighters.’ Based on the information, we gathered from an Interior Ministry official, if these fighters had Turkic roots, they would be given Turkish passports, if not, then they were to be sent off to third countries.” Providing Turkish residency to foreign fighters might make their surveillance more challenging.

We have yet to see what will come of those who have acquired Turkish residency. Research on jihadi foreign fighter networks show returned fighters have a high probability of reengaging with their old groups.

Demirhan also highlighted that Turkey is officially involved in the global war against terrorism with the United States, and this generates a conflicting situation. He added, “Turkey is in the middle of an AKP-generated jihadi swamp.”

Uyghur foreign fighters also have plans beyond Syria. Aaron Y. Zelin, the Richard Borow fellow at the Washington Institute for Near East Policy, told Al-Monitor, “While they are in Syria to fight the regime and its allies, they also are using it as a battleground to train and prepare to one day maybe return to the AfPak region of Xinjiang for that matter and attacks the Chinese government. However, I should caution how realistic that is considering how difficult that would be on a number of levels and their actual capacity for doing so at this juncture.” Yet with the unregulated influx of Afghan refugees through porous borders, and Ankara’s plans to get involved in Afghanistan, the Uyghur diaspora becomes another source of concern for security.