Israel considers canceling Green Pass for those without booster shot

Health Minister Nitzan Horowitz said there was no justification for giving a Green Pass to people who had not gotten the third, booster vaccination dose. 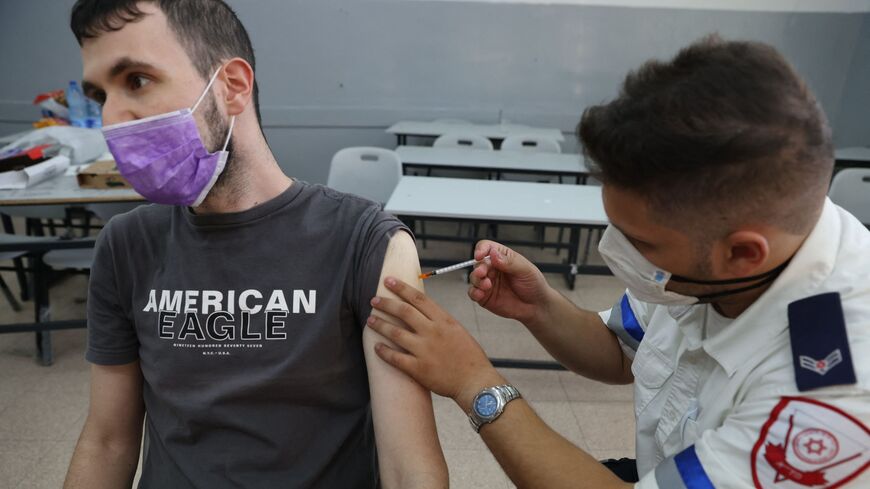 A paramedic with Israel's Magen David Adom medical service administers the third shot of the Pfizer COVID-19 vaccine on Aug. 24, 2021, in Holon. Israel lowered the age threshold to receive a third coronavirus booster dose to anyone 30 and above as the country continues to battle surging infections. - AHMAD GHARABLI/AFP via Getty Images

Health Minister Nitzan Horowitz warned Aug. 24 that Israel might cancel the Green Pass of people not inoculated with three doses of the coronavirus vaccine. “This is simply because, in terms of its effectiveness, the vaccine is valid only for a period of five or six months. After about half a year, you have to get a third dose. Otherwise, the vaccine loses its power. The Green Pass testifies that a person is safe in a certain way. So the moment we know that the vaccine loses its effectiveness after a certain period, there’s no justification for giving a Green Pass to someone who hasn’t gotten another dose,” said Horowitz.

The head of public health services at the Health Ministry, Dr. Sharon Alroy-Preis, said Aug. 24 that in view of the continuous surge in coronavirus cases, more limits on social gatherings must be implemented, even those held under the Green Pass system. Israel on Aug. 24 reported nearly 10,000 new coronavirus cases, for the first time since January 2021.

On Aug. 8, Israel expanded the Green Pass system. Only people holding the Green Pass can now enter event venues, conference halls, culture and sporting events, restaurants, cafes, gyms, hotels and movie theaters, regardless of the number of participants or the number of people present there. The Health Ministry is also considering limiting family gatherings during the upcoming Jewish holidays, and especially on the Jewish New Year on Sept. 6.

Israel started vaccinating with a third dose some three weeks ago. The campaign began by offering the booster dose to people vaccinated twice five months ago at the least and age 60 and above. The campaign later expanded to include people 50 and above, and then also people forty and above. On Aug. 24, it was expanded to people 30 and older. A statement from the Health Ministry on Aug. 24 said its decision to lower the age of eligibility for a third booster dose of the Pfizer vaccine from 40 and above to 30 and older was made following recommendations from its panel of experts. The Health Ministry expects opening booster doses for younger ages in the coming days.

In an effort to inoculate people with the booster dose as quickly as possible, several municipalities have opened vaccination centers that operate late into the night and even into the very early hours of the morning, seven days a week.

In parallel, ahead of the school year scheduled to open Sept. 1, Israel launched a campaign of serological tests for children ages 3 to 12, who are not eligible for vaccines. Since the launch of the campaign, many parents have complained about results not arriving on time or not arriving at all. According to some reports, the campaign will be reduced and restricted to localities with high rates of coronavirus cases. This campaign was halted Aug. 25 for one day for authorities to examine operations.

A third campaign is attempting to reach the 1 million or so Israelis who have not been vaccinated at all. Horowitz said Aug. 23 that his ministry will dispatch mobile vaccination units to communities with low vaccination rates.

Israeli opposition leaders on Aug. 24 urged Knesset Speaker Mickey Levy to reconvene the Knesset plenum for an emergency session, despite the parliament’s recess, to address the crisis several public hospitals are facing. As of Aug. 25, seven public hospitals are operating on weekend mode, with reduced capacity only. Their managers are protesting a severe lack of human and financial resources and notified the Health Ministry they will close their coronavirus wards and only proceed with life-saving operations.