While there was no official comment from the Egyptian government on the demonstrations against a controversial electoral law in Qatar, Egyptian media outlets have criticized Al Jazeera for not covering the protests. 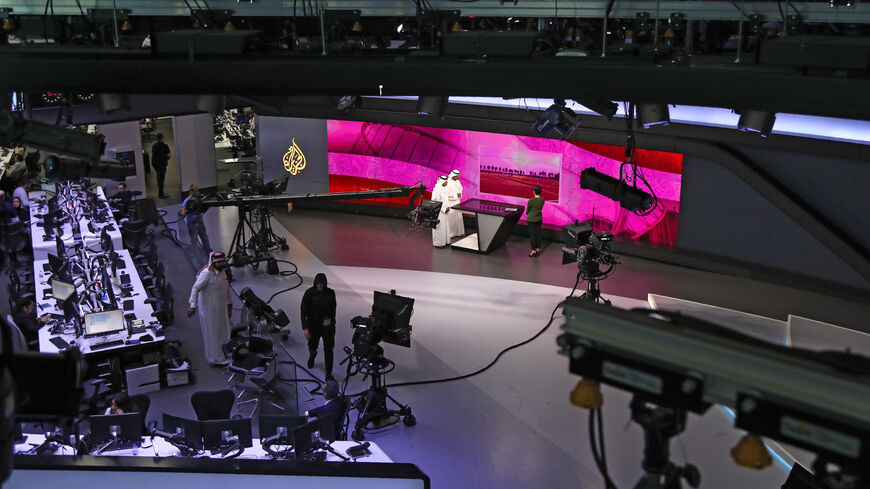 A picture taken on Dec. 5, 2019, shows a TV show presentation by the newsroom at the headquarters of the Qatar-based Al Jazeera satellite news channel in the capital Doha. - KARIM JAAFAR/AFP via Getty Images

Cairo has remained silent on the recent outbreak of demonstrations in Qatar, but the pro-government Egyptian press has not. Many outlets have criticized the Qatari authorities' handling of the demonstrations and the wide arrests of protesters.

Qatari demonstrators took to the streets on Aug. 10 in rejection of a law concerning the Shura Council elections scheduled for October. It sets new conditions for candidacy and voting that many deem racist.

According to the legislation, only the grandchildren of Qataris who were citizens in 1930 are eligible to vote and run in elections, meaning that members of families that were naturalized from that year forward are not eligible.

Observers believe that the law targets the al-Murrah tribe — one of the largest in Qatar — in a bid to exclude its members from the elections.

Despite the recent calm and reconciliation efforts between Egypt and Qatar, the Egyptian press criticized the way the Qatari regime handled the protests.

On Aug. 11, al-Masrawy newspaper criticized Al Jazeera for not covering the protests when they first broke out despite its offices' proximity to them. The Veto newspaper criticizing what it called racism against the al-Murrah tribe.

Ahmed al-Muslimani, an Egyptian journalist and the former media adviser to former Egyptian President Adly Mansour, said during his talk show on Aug. 12, “Qatar may appear to be a pro-democracy country, but in fact it’s not. Anyone watching Al Jazeera would get the idea that Qatar is the cradle of democracy in the region, but in fact, the 2021 elections are the first in the country’s history.”

“Al Jazeera reported in detail on the political experiences in Egypt, while Qatar did not have any political or democratic know-how. This was the first time that Qatar saw demonstrations and protests, and some opponents threatened to try and seek external intervention and to put an end to the social contract with the ruler. Today, Qatar had a taste of its own medicine and what it did to other countries where citizens with a strong sense of nationalism blocked its attempt at interference,” he added.

In statements to the newspaper on Aug. 15, Ikram Badr al-Din, a professor of political science at Cairo University, said, “Al Jazeera’s slogan is ‘The opinion ... and the other opinion,’ but it was clearly biased against the demonstrations that broke out close to the news channel’s offices, as if the demonstrators were not Qatari.”

“Al Jazeera’s performance suggests that it is not independent and works only for the benefit of the ruling family in Qatar,” he added.

Following the criticism for turning a blind eye to the demonstrations when they first broke out, Al Jazeera did produce some reporting on the protests. Qatari journalist Mohammad al-Marri commented, “Neighboring countries are keeping a close eye on the events unfolding in Qatar.”

Egypt and Qatar have recently pursued a rapprochement in relations. In May, Egyptian President Abdel Fattah al-Sisi received Qatari Foreign Minister Mohammed bin Abdulrahman bin Jassim Al Thani, who conveyed a message from the emir of Qatar, Tamim bin Hamad Al Thani, and an invitation for Sisi to visit Doha.

On July 31, Al Jazeera correspondent Shireen Abu Aqleh appeared in a live broadcast from the heart of Cairo, for the first time since Al Jazeera’s offices there were closed about eight years ago. Meanwhile, the Qatari channel increasingly hosts Egyptian officials.

Egyptian analyst Hisham Qassem told Al-Monitor, “The Egyptian regime has used many of its media mouthpieces to criticize the demonstrations in Qatar and how the authorities dealt with them.”

“The strong criticism of some media outlets of what is going on in Qatar would not affect the reconciliation path between the two countries who share common interest that compel them to move forward down this road. But I think this attack by the Egyptian media was more directed against Al Jazeera, which never ceased to criticize the Egyptian regime before,” he added.

Qassem said, “The Qatar demonstrations revealed that Al Jazeera is a tool in the hands of the ruling family and does not express the view of Arab peoples or the Qatari street.”

He added, "Egypt and Qatar are working to achieve reconciliation. But this is not stopping some media pressure and criticism from both countries."