The kingdom diversification plan goes head-to-head with flag carriers Emirates and Qatar Airways, as intra-Gulf economic rivalries heat up on all fronts. 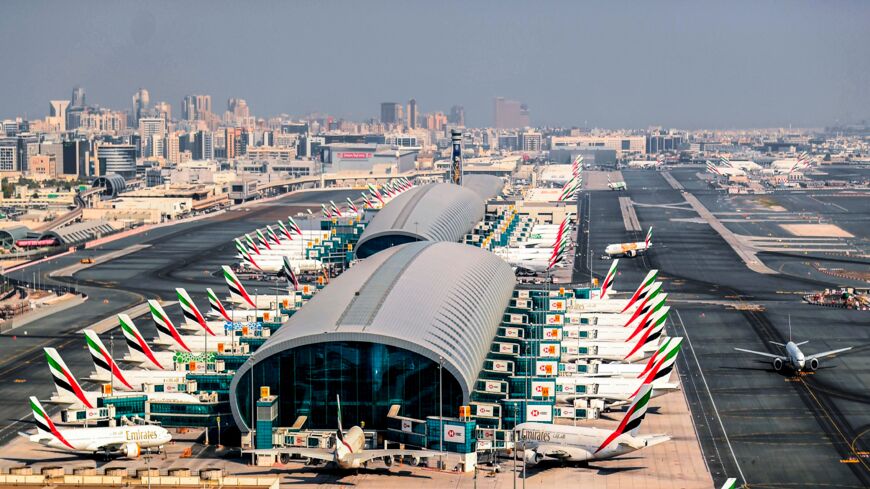 This picture taken on July 8, 2020, shows an aerial view of Emirates aircraft parked on the tarmac at Dubai International Airport, serving the Gulf emirate of Dubai. - KARIM SAHIB/AFP via Getty Images

Saudi Arabia plans to launch a second national airline “as soon as possible” to catapult the country into the fifth rank globally in air transit traffic, increase air connectivity to reach more than 250 destinations, and go head-to-head with flag carriers Emirates and Qatar Airways.

“It’s good for us. More competition means more job availability and better salaries,” said a pilot employed by a competing airline. But industry analysts remain skeptical. “It is simply too late; they have missed the boat," said Alex Macheras, a UK-based aviation analyst. He told Al-Monitor, “There is no need for another airline to replicate what Qatar Airways and Emirates have already achieved in terms of being the global super-connector airlines.”

Indeed, the Qatari and Emirati flag carriers dominate the East-West transit market — when a passenger stops at an air hub en route to a destination — and Dubai International Airport holds the crown as the world's busiest international airport for the seventh straight year.

The risk of a lack of competitive advantage is not the only challenge that awaits Riyadh. The aviation industry suffered its "worst year in history" as the COVID-19 pandemic decimated demand for long-haul travel. Emirates Group reported its first nonprofitable year in over three decades, and demand for international travel in the Middle East was still 81% lower in May 2021 than in May 2019, the International Air Transport Association reported.

Some US and international passengers who are sensitive to human rights issues might avoid or boycott the airline because of the murder of the Saudi journalist Jamal Khashoggi in 2018 by Saudi operatives.

Clash of the Titans

The fierce economic competition that is likely to oppose Saudi Arabia’s future airline to Emirati and Qatari flag carriers is part of a broader rivalry for the Gulf’s economic leadership, as a global shift toward low-emissions energy jeopardizes the future of Gulf petro-states.

The similarities between Gulf states’ economic diversification plans risk pushing countries against one another. Riyadh announced in February that multinational companies whose regional headquarters are still located abroad after 2023 would be cut off from lucrative state contracts. The move is interpreted as an attempt to undermine Dubai, a business hub where most international companies active in Gulf markets have based their regional headquarters.

“I think there is no doubt that the Saudi diversification plan will siphon off business from the United Arab Emirates (UAE),” Najah al-Otaibi, a UK-based Saudi political analyst, told Al-Monitor. She noted investors are “keen to enter” the Middle East’s largest market to “engage with customers."

“Gulf countries are caught in costly rat races,” wrote Frederic Schneider, economist and senior research associate at the University of Cambridge. “Instead of chasing each other in pointless projects, each Gulf country needs to lean into its own unique selling proposition.”

But following a rare public Saudi Arabia-UAE spat over oil production quotas, Saudi Arabia unilaterally decided to depart from the GCC tariff agreement. It excluded from preferential tariff concessions goods made in the Gulf’s free zones — a major driver of the UAE’s economy — or goods that contain components made in Israel or manufactured by Israeli businesses.

This aims to impact the UAE, where a US-brokered normalization deal with Israel led to a surge in investments between Israel and the federation of seven sheikhdoms — $1 billion in the last two months of 2020, the chairman of the Israel Export Institute told Al-Monitor.

Saudi Arabia’s plans to emerge as a third hub in the Gulf revive debates over the economic viability of hub-and-spoke networks that centralize a large volume of passengers on a hub at the crossroads of major air routes before dispatching them to their final destinations.

“Big airport hubs like Dubai are hungry, and they need to be fed,” he told Al-Monitor.

Outside of the Gulf region, Saudi Arabia is also likely to face competition from Turkish flag carrier Turkish Airlines, whose hub in Istanbul has emerged as an alternative to Gulf hubs. Another limitation could be whether the airline would serve alcohol on board, especially in business and first-class. National airlines from the UAE, Qatar and Turkey all serve alcohol.

And the option of offering transit passengers a religious stopover to visit Mecca, the holiest city for Muslims, will not be a byproduct the new Saudi airline could market to the world’s 1.8 billion Muslims. Indeed, the new airline will be based in Riyadh, while Saudia, the existing national flag carrier, will keep operating from Jeddah, an hour's drive from Mecca.

However, the upcoming airline could feed on the Gulf’s largest population center — Saudi Arabia has a native population of about 21 million citizens — as Riyadh’s nationalist narrative is likely to push Saudi travelers to favor the new airline over foreign carriers. In 2018, 14.6 million passengers flew out of the kingdom with a foreign airline.

At Hamad International Airport, the home base of Qatar Airways, construction is underway to expand capacity to over 53 million passengers a year in 2022 when Qatar will host the first FIFA World Cup in the Middle East and over 60 million passengers after the tournament. The airport media department did not respond to a request for comment on the progress.

The Saudi leadership might be envying the “success of the UAE and Qatar,” said aviation analyst Macheras. “Successful airlines have put them on the map, made those countries household names, and I think Saudi Arabia thinks it may be able to do the same.”

The Gulf nation is trying to shake off its ultra-conservative reputation and distance itself from the Wahhabi ideology, a hard-line strain of Islam. The country has used social media influencers and invested billions in attracting high-profile cultural and sporting events featuring global celebrities to bolster Saudi Arabia's reputation internationally.

“An airline will be a strong tool for projecting nation-branding,” Otaibi believes.

The experience of Etihad Airways provides an insightful benchmark, though. The Emirati flag carrier has received around $22 billion from the Abu Dhabi government since it began flying in 2003. Yet it struggled to gain market shares and eventually scaled back its ambitions.

The Saudi Transport Ministry announced that the country would inject 550 billion riyals ($147 billion) into transport and logistics by 2030, including in the new airline and airport infrastructures, but it fell short of detailing the strategy to navigate depressed demand for international travel in a market plagued by overcapacity. “It seems like a vanity project,” Macheras concluded.

Although economic reforms led by Saudi Arabia’s de facto ruler Mohammed bin Salman fell short of goals, the kingdom stressed its plans to attract 100 million visitors a year by 2030, thus creating demand for the new airline. But there is a long way to go. Saudi Arabia opened its door to tourists in 2019 and attracted 16.5 million visitors. This is just 1.2 million more than in 2018, as religious visits continue to lead the demand for air travel to the kingdom.