Bennett bristles under US criticism for punitive house demolition

In a first open disagreement, Washington condemned Jerusalem for demolishing the family home of a Palestinian assailant, while Jerusalem said its first priority is the safety of Israeli citizens. 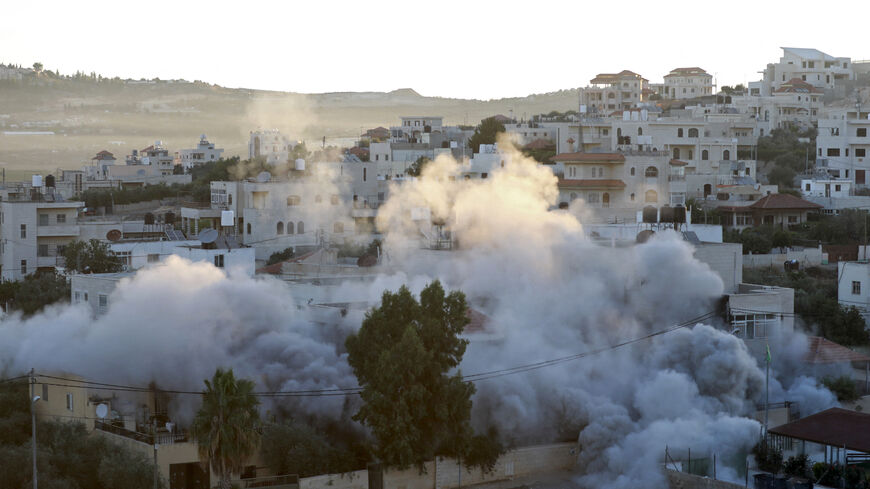 A building that belonged to Palestinian Montasser Shalaby, who was arrested in May on suspicion of carrying out a drive-by shooting attack, is imploded in the course of its demolition by Israeli forces in the village of Turmus'ayya near Ramallah in the occupied West Bank on July 8, 2021. - AFP via Getty Images

Prime Minister Naftali Bennett's office responded today to criticism from Washington concerning last night's demolition of convicted Palestinian assailant Muntasser Shalaby's home in the West Bank. A statement from Bennett’s office said, "The Prime Minister appreciates and respects the US government. At the same time, he acts only in accordance with considerations for the State of Israel's security, and to protect the lives of Israeli citizens."

Shalaby is a resident of the village of Turmus Aya in the Ramallah area. A investigation by Israeli security services found he had planned and executed an attack May 2, driving near a bus stop at the Tapuach settlement junction and firing at the civilians waiting there. His indictment stated he had chosen the Tapuch junction specifically to target both civilians and IDF soldiers. The indictment also noted that Shalaby only ceased firing after his weapon gave out, after killing 19-year-old Yehuda Guetta and wounding two other people.

The Israel Defense Forces believes that Shalaby fled the scene and ditched the car he had used in the nearby town of Aqraba. The vehicle was torched by locals as soldiers arrived to seize it. Simultaneously, Israeli police and IDF troops raided a building in the central West Bank village of Silwad and arrested Shalaby. After his indictment, the IDF started planning the demolition of his family home.

Shalaby's family appealed the Supreme Court against the planned demolition, claiming that as US citizen he traveled frequently to the United States and that the house in Turmus Ayya should not be considered his primary living place. His estranged wife Sanaa told the press that her husband spent most of his time in Santa Fe, New Mexico, where he had married three other Muslim women in unofficial traditional ceremonies. She said he used to return to the West Bank for a couple of weeks every year to visit their children, who live with her in Turmus Ayya. On June 23, the Supreme Court rejected the appeal, stating that Shalaby had lived in the home continuously from 2006-2012 and that he had resided there for weeks before the May 2 attack.

Washington had warned Jerusalem against demolishing the family home, reiterating its objection to Israel's policy of collective punishment for deterring future assailants, specifically in the case of an American citizen. Nevertheless, Israel went ahead with the demolition. In reaction, a spokesman of the US Embassy in Israel said this morning mentioned “following” reports of the demolition of the home of Shalaby's allegedly estranged wife and their children.

“As we stated numerous times, the home of an entire family should not be demolished for the actions of one individual. We believe it is critical for all parties to refrain from unilateral steps that exacerbate tensions and undercut efforts to advance a negotiated two-state solution, this certainly includes the punitive demolition of Palestinian homes,” read the statement.

The exchange between Washington and Bennett’s office marks the first open dispute between the US administration and Israel’s new government. During the June 29 visit of former President Reuven Rivlin, President Joe Biden told him he expected to meet soon with Bennett. No date has been announced.