The fires west of Jerusalem are the latest in a series of blazes to break out near the Israeli city in recent days. 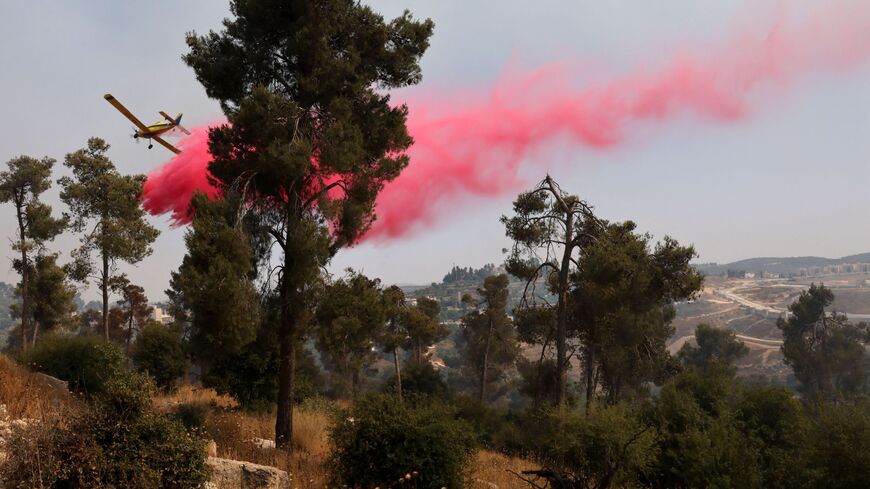 A firefighting plane works to extinguish a forest fire raging near the Maale Hahamisha kibbutz in the area of the Arab-Israeli village of Abu Ghosh near Jerusalem, on June 9, 2021. - MENAHEM KAHANA/AFP via Getty Images

Residents were forced to evacuate their homes on Wednesday as another series of fires raged west of Jerusalem.

“The fire is closing in on homes in Abu Ghosh and Yad Hashmona,” the Israel Fire and Rescue Services said. “Many firefighting forces are working alongside four firefighting planes in order to prevent the fire from spreading to those homes.”

The Jerusalem Post reports that 10 airplanes, two helicopters and more than 70 firefighting teams were working to extinguish the fires, which have reportedly spread to the nearby Mount Eitan.

Firefighters haven’t been able to contain fires at Sataf National Forest and the Tur Sinai Organic Farm, the outlet reports.

Police have begun to evacuate residents from the kibbutz of Ma'ale HaHamisha, roughly seven kilometers (four miles) from Jerusalem, though they have reportedly wrested control of the fire there.

Access was closed to area roads and highways and train service between Jerusalem and Tel Aviv was shut down on Wednesday, authorities said.

The proceedings in Prime Minister Benjamin Netanyahu’s corruption trial in Jerusalem were suspended due to the fires. Netanyahu has been charged with fraud, bribery and breach of trust, but denies any wrongdoing.

Israel has experienced a series of dangerous blazes in recent days, including a fire Sunday near Bat Ayin in the Gush Etzion settlement bloc in the West Bank. On Friday, a massive fire near the town of Tzur Hadassah outside Jerusalem forced more than 400 families to evacuate. The fire erupted again on Saturday before firefighters brought it back under control.