A Dubai Oktoberfest event modeled after the beer-filled German festival will take place in October in the UAE's largest city. 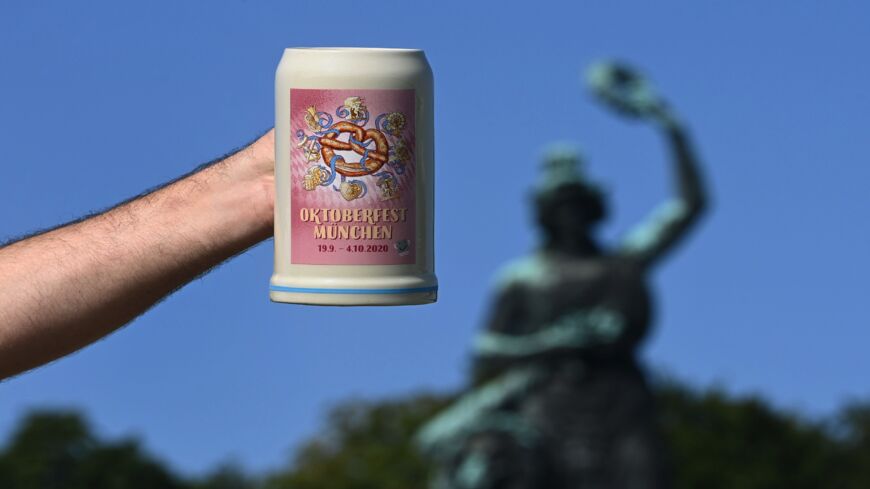 A man holds up the official 2020 Oktoberfest beer mug in front of the Bavaria monument at Theresienwiese in Munich, southern Germany, the place of the yearly beer festival, on Sept. 19, 2020. The traditional Bavarian Oktoberfest beer festival would have started today, but it was canceled a few months ago due to the ongoing novel coronavirus COVID-19 pandemic. - CHRISTOF STACHE/AFP via Getty Images

A German city is angry about an Oktoberfest event planned in Dubai.

Oktoberfest is an annual festival that takes place in the fall in Munich. It is perhaps best known internationally for the large quantities of beer consumed during the festivities. It was canceled last year due to the COVID-19 pandemic, and the festival announced today that it would not take place this year either.

The original Oktoberfest will have competition this year from the United Arab Emirates’ largest city. The event's website, DubaiNight, is promoting a “Dubai Oktoberfest” event.

“But you do not have to fly to Munich just to experience Oktoberfest. We bring you the places here in Dubai where you can get all the German action,” read an advertisement on the website.

The Dubai Oktoberfest will run from Oct. 23 to Nov. 9 and bills itself as authentically featuring German costumes, traditional pastries and, of course, beer.

The Emirati version of the festival is illegitimate, however, according to a statement from city of Munich.

“Oktoberfest is a Munich original and takes place exclusively in Munich,” the city said, as reported by Germany’s public broadcaster, Deutsche Welle, on April 30.

The city government felt compelled to speak out due to media reports that implied Oktoberfest was officially moving to Dubai, according to the outlet.

“The organizer's plans for the event in Dubai, which have now been made public, are being carried out neither with the participation nor with the consent of the city of Munich,” read the statement.

Dubai has prided itself on remaining open to tourists throughout much of the pandemic. The city allowed international visitors to return starting last July.