"The Man Who Sold His Skin" was nominated for best foreign film at the Academy Awards, the first-ever nomination for Tunisia. 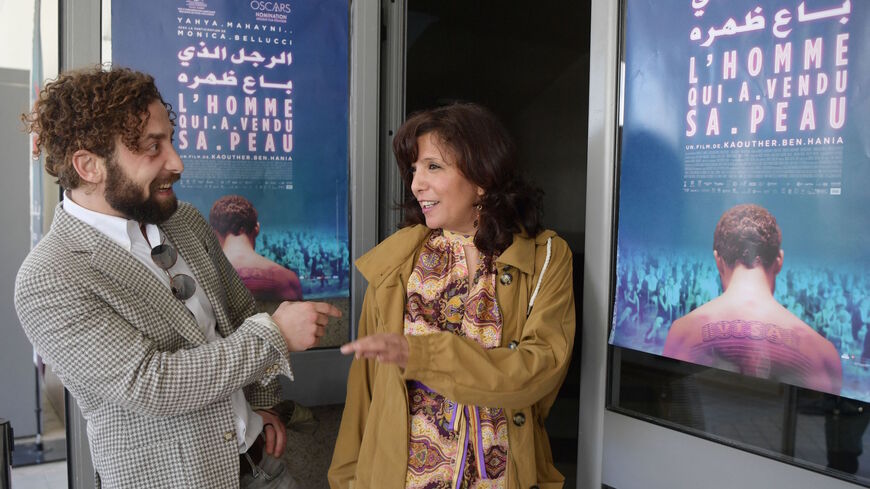 Syrian actor Yahya Mahayni poses with Tunisian director and screenwriter Kaouther Ben Henia in front of a poster for the Tunisian film "The Man Who Sold his Skin" during its first screening in the Tunisian capital Tunis, on March 30, 2021. - FETHI BELAID/AFP via Getty Images

A Tunisian film came up short at the Oscars last night.

“The Man Who Sold His Skin” was nominated for best International Feature Film at the Academy Awards, which aired on April 25. The movie, directed by Tunisian Kaouther Ben Hania, was the North African country's first Oscar nomination.

The prize went to the Danish film “Another Round.”

Though the film was submitted by Tunisia, it tells the story of a Syrian refugee and stars Syrian actor Yahya Mahayni. The main character, Sam Ali, is forced to leave his country after making comments perceived as critical of the government. A wealthy artist in Lebanon agrees to give Sam a passport and money in exchange for the right to tattoo Sam’s entire back. The BBC described it as “a parody of the avaricious mega-bucks art scene.”

Ben Hania told The National in September that her work was inspired by her own difficulties obtaining the coveted Schengen visa that allows for travel to the European Union. =

Tunisia has a vibrant movie scene. The 2018 film “Beauty and the Dogs” depicted the place of women in society after the 2010 revolution. The same year, the documentary “Subutext” broke taboos with its depiction of homosexuality in the slums of the capital Tunis.