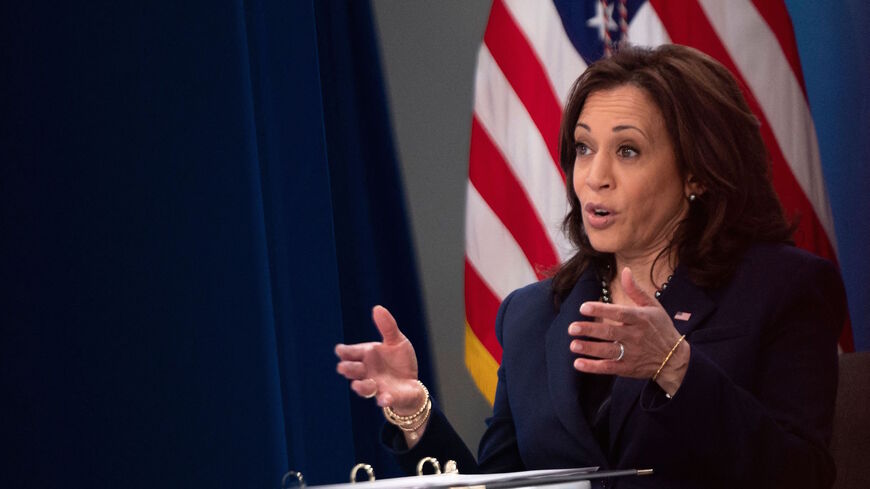 US Vice President Kamala Harris meets virtually with the founding members of the COVID-19 Community Corps in the South Court Auditorium of the White House in Washington, DC, on April 1, 2021. - ANDREW CABALLERO-REYNOLDS/AFP via Getty Images

Kurds who support Turkey’s autocratic President Recep Tayyip Erdogan are hard to come by in Washington, DC. But one such individual says he’s the highest bidder for Vice President Kamala Harris’ home at the Westlight condominium complex in northwest Washington’s West End neighborhood. Muhsin Bayrak, a rags-to-riches businessman and chieftain of the sprawling Modki tribe from Turkey’s mainly Kurdish Bitlis province, said, “The negotiations are about to be concluded and we’re planning to sign soon.” Bayrak did not reveal how much he’d offered for the 1,731-square-foot condo at 1111 24th St., which is listed for $1,995,000. The listing was still fully active as of the time of publication of this article. It’s been on the market for nine days.

In comments to the Turkish media, Bayrak claimed that his prospective acquisition of the vice president’s two-bedroom flat “is of great importance to Turkey as well.” He did not elaborate.

Bayrak is the CEO and founder of AB Group Holding, a construction conglomerate launched in 1999, three years before Erdogan’s Justice and Development Party shot to single-party rule. The company has since prospered, building luxury residences in Istanbul. It has extended its operations to Athens and London. But its flagship project, a four-building high-rise complex named Bayrak Towers launched amid much fanfare in 2015, has yet to get off the ground. Bayrak announced at the time that he’d signed a preliminary deal with Saudi Arabian investors worth 50 million euros (about $56 million at that time) for one of the towers.

Bayrak describes himself as a “high-society Kurd.”

“I pray five times a day and I go to nightclubs,” he told a Turkish reporter, who showed surprise at the Kurdish entrepreneur’s taste for Rihanna, saying he viewed him as more of a “traditional folk song person.”

The Modkis are among the largest Kurdish tribes in Turkey. In his seminal work on Kurdish tribes, Agha, Shaikh and State, Dutch anthropologist Martin van Bruinessen, citing the celebrated Ottoman explorer Evliya Celebi, wrote, “The military might of Bitlis was constituted by the other tribes, among whom the Modki especially stood out, who could muster 700 soldiers with rifles."

Bayrak, whose thickly accented Turkish instantly gives away his Kurdish roots, never wastes an opportunity to air his support for Erdogan and his unwavering devotion to the Turkish state. He said he’d be digitally projecting a giant Turkish flag on one of the towers of the complex that has yet to be built.

In Washington, Bayrak may not be betting on much of a winner either, according to a well-established DC broker who markets luxury properties. “Two million dollars for a two-bedroom apartment with no outdoor space is overpriced,” the agent told Al-Monitor on strict condition of anonymity. “The building has a big flaw,” he added. “The common space, the swimming pool is shared by property owners and renters alike. I would never recommend it to my customers.”