Former detainees told the rights group they were subjected to torture and other ill-treatment while in pre-trial detention. 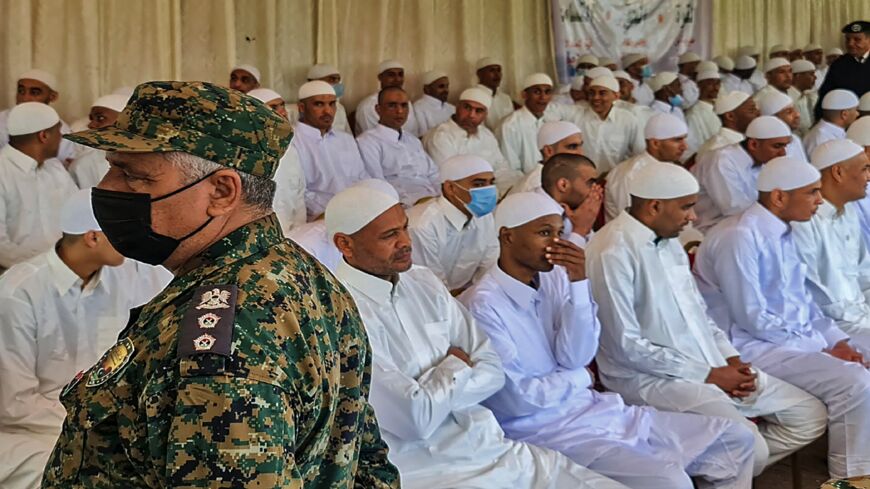 Prisoners of war loyal to the forces of Libya's eastern military strongman Khalifa Hifter are pictured after their liberation by the new Libyan unity government on March 31, 2021, in the port city of Zawiya, 50 kilometers (30 miles) west of the Libyan capital, Tripoli, following the latest peace deal between the North African country's former rival governments. - MAHMUD TURKIA/AFP via Getty Images

“The use of military trials for civilians is a blatant smokescreen by which the LAAF (Libyan Arab Armed Forces) and affiliated armed groups are exerting their power to punish those who oppose them and instill a climate of fear,” said Amnesty International’s regional deputy director Diana Eltahawy.

Of the hundreds of civilians tried in military courts between 2018 and 2021, the London-based organization said the convicted include journalists, peaceful protesters and social media users who posted criticism of the LAAF or affiliated groups.

Amnesty International spoke with former detainees who alleged they had been abducted, held incommunicado, waterboarded and forced to sign false confessions. One man described being beaten and threatened with rape by an armed group that covered his face and poured water on him in a simulated drowning.

Court proceedings were grossly unfair and routinely flouted regional and international standards, Amnesty International said. Defendants were tried in closed hearings where they were denied access to lawyers before and during the trial, as well as the casefiles and evidence against them.

“Civilians released after serving sentences said their prosecutions had tainted their lives, including their prospects of finding employment. The fear of further arrests also hangs over their heads,” Amnesty International said.

Libya has been embroiled in a years-long conflict pitting Hifter’s self-styled army against the United Nations-recognized government. An October cease-fire paused the fighting, and an interim unity government headed by Prime Minister Abdulhamid Dbeibah will lead the country until elections are held in December.

The North African country remains deeply fractured despite the swearing-in of a new unity government last month. The LAAF and its allied armed groups still have effective control over the country’s east.

Amnesty International called on the transitional government to quash all convictions and sentences imposed on civilians by Libya’s military courts, as well as protect those lawfully detained from torture and guarantee them fair trial rights.

“Any civilians charged with internationally recognizable offenses must be tried before civilian courts in fair proceedings and without resorting to the death penalty,” Eltahawy said.