Iran renews call on UK to pay off outstanding debt

The Iranian government is widely accused of using the case of a jailed British-Iranian activist as a pressure tool to secure the repayment of the long-standing debt. 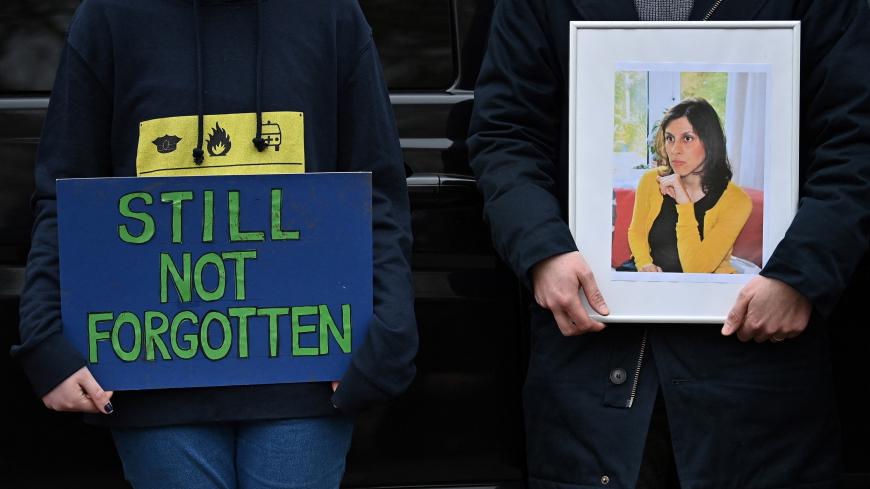 People attend a protest in support of British-Iranian aid worker Nazanin Zaghari-Ratcliffe jailed in Tehran since 2016, outside of the Iranian Embassy in London on March 8, 2021. - The UK government on Sunday called for the immediate release of a British-Iranian woman after her five-year sentence for sedition ended in Iran, as a new court summons caused further uncertainty about her fate. - BEN STANSALL/AFP via Getty Images

Iran’s defense minister, Brig. Gen. Amir Hatami, said March 23 that the UK government should “act with practicality” in delivering an outstanding payment of 400 million pounds ($551 million) to the Islamic Republic.

The debt has to do with an undelivered package of hundreds of British Chieftain tanks and armored vehicles ordered by the Shah of Iran before he was brought down in the country’s 1979 revolution.

Hatami’s statement was a response to his British counterpart Ben Wallace, who acknowledged earlier that it was “absolutely right” for the UK “to honor” the debt and that London “should find ways to return it to Iran.” The UK government has previously linked the repayment failure to international sanctions targeting the Islamic Republic.

In 2008, following a yearslong legal battle over the case, an international arbitration court ruled in favor of Iran. British officials have accepted the verdict, and Wallace was last among them to say that London will “comply … with the rule of law.”

But the UK defense minister’s comments appeared less than reassuring to the Iranian side. Hatami lamented that “the statements from UK officials differed from their actions.” He added that international sanctions “are not the main obstacle” to the UK repayment of the debt, and that Iranian officials expect London “to meet this legitimate demand of the Iranian nation.”

The controversy surrounding the case, however, comes mainly from the connection it has found with the imprisonment in Iran of British-Iranian activist Nazanin Zaghari-Ratcliffe. The charity worker with the Thomson Reuters Foundation was arrested at Tehran’s Imam Khomeini Airport in April 2016 as she was wrapping up a family visit to Iran. She was charged with “espionage and acting against Iran’s national security” and consequently endured five years in Iranian jails.

UK officials and Zaghari-Ratcliffe’s family have alleged that she is being held as a “hostage” by Iranian authorities to elicit the debt repayment from London. And amid failed diplomacy, the activist served her full jail term, which ended March 7. Still, she had to appear at another proceeding a week later to face more charges, which her lawyer said had already been addressed in her initial but now closed case.

It is not clear what will happen next in her case. The Iranian judiciary has claimed time and again that the case has been treated independently from the outstanding debt. But for Zaghari-Ratcliffe, who still finds herself caught up in the seemingly endless UK-Iranian row, any opening in the debt repayment file could mean the next flight back home.