Syrian Armenians, despite the fragility of their presence in the region, are determined to stay and rebuild. 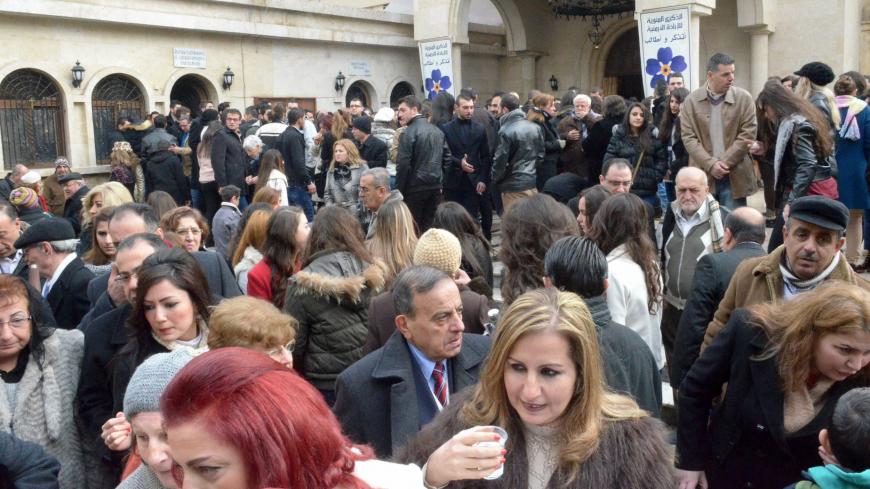 Armenian Orthodox worshippers leave after a Christmas service at the Holy Mother of God Armenian Orthodox Church on Jan. 6, 2016, in the northern Syrian city of Aleppo. - GEORGE OURFALIAN/AFP via Getty Images

Nora Bulbulian is in the hunt for a good publisher. “I’m in the process of trying to find someone in the US. I’m asking around but it is kind of difficult.”

Finding a publisher can be a harrowing process for any young author, but in this case, Bulbulian is doing the search from her home in Aleppo, Syria. Still, she seems up to the challenge. “We are a people who have been there and done that. We saw it all,” Bulbilian, 30, told Al-Monitor in a phone interview.

Bulbulian, who says she loves children, wrote two children's books before the war.

“I didn’t want to write about Aleppo. I wanted to write children's books. But the crisis that we went through, the pain and heartache, I had to write about what we were going through,” she said. “I write with intensity. This book has taken a toll on me.”

First and foremost, Bulbulian is Syrian and proud of it. She said her manuscript documents the life of the entire Aleppo community from 2015 to 2020.

“Armenians have always played a creative, constructive and leading role in Syria in peaceful conditions. Today, despite the conditions of the war, and decline of the Armenian community’s number, our schools and unions are functioning. We, as full-fledged citizens, make our contribution to all areas of Syria,” said Zarmig Boghigian, editor of Kantsasar, an Armenian weekly newspaper in Aleppo.

The presence of Armenians in Syria dates to well before the Arab conquest of the Levant. Over the centuries Armenians in the region flourished as skilled craftsmen, jewelers and merchants and many are still active in family businesses such as the gold and carpet trade.

In the last years of the Ottoman Empire and during the French mandate, Aleppo became a refuge for persecuted Christians, particularly those escaping the Armenian genocide. Boghigian’s family arrived in Aleppo during this time period, coming from the Turkish city of Birecik.

“My grandfathers were displaced by force from their homeland in 1915. … The Arab people welcomed them with respect and gave them shelter to work, to survive, to build their school and church,” Boghigian said.

Although the region has been witnessing high rates of Christian emigration for decades, Aleppo’s Armenian community, and its wider Christian community, remained sizable and prominent. Before the war an estimated 150,000 Armenians resided in the city. Boghigian told Al-Monitor that at least one-third have left, though this number is likely higher.

Suzy Kheshvajian is a 10th-grade Armenian language teacher at Karen Jeppe Armenian College. She said the school had 1,200 students before the war and that there are 350 left.

“Most of my friends left because of the bad circumstances. We stayed here because we had our jobs and we love Aleppo,” Kheshvajian told Al-Monitor in interview via WhatsApp.

The opposition targeted Syria’s Armenian community. One of the more infamous attacks was on the Armenian village of Kessab in 2014 by Islamists believed to have been aided by Turkey.

During the Battle of Aleppo, the predominantly Armenian Al-Midan district of the city, where Kheshvajian’s school is located, was subject to intense rebel shelling. Many residents who spoke with Al-Monitor said this was purposefully aimed at the community.

“The concentration of attacks on this area, where the Armenians lived and worked, you know that something is up. And it paid off. It scared the hell out of the people,” Bulbulian said.

Syrian Armenians welcomed the return to stability and relative security when the government took back full control of Aleppo in 2016 and pushed out the predominantly Islamist opposition.

And the country of Armenia, unlike its Western counterparts, has maintained official relations with Damascus.

“Cutting diplomatic ties would mean taking sides when a friendly country was in the midst of civil war and moreover under the attack of terrorist organizations,” Armenian Foreign Ministry spokeswoman Anna Naghdalyan told Al-Monitor in a written statement.

“For years the Armenian community in Syria has enjoyed protection and respectful attitude from the authorities and suffered attacks emanating from Turkish backed terrorist organizations,” she added.

The country sent a humanitarian mission with medical and demining experts to Aleppo in 2019 and to date has dispatched six airplanes of aid to Syria, the ministry said.

The friendly ties between Damascus and Yerevan are based in part on the close cultural, religious and historic links the countries share due to the Armenian diaspora community. Since the civil war broke out, the Syrian government has positioned itself as a protector of minorities in the Middle East. Both Yerevan and Damascus are also united in their ire about Ankara’s policies in the region.

The stinging Armenian defeat in the Nagorno-Karabakh conflict last year and the current political instability convulsing the Armenian capital are a reminder of how small the region is when it comes to common foes.

“The crisis revealed to what extent the security between our region and the Middle East is interrelated,” Naghdalyan said.

Turkish drones and military support were crucial to Azerbaijan’s victory over Armenia. The Foreign Ministry said Ankara’s unchecked actions in the region encouraged Turkey's decision to take such a decisive stance in the conflict, saying, “Impunity always entails new crimes. No doubt that those unchecked actions in Syria emboldened Ankara for its aggressive policy in other regions.”

One of the more escalatory decisions Ankara took was enlisting foreign fighters from its Syrian proxies to fight against Armenian forces. Yerevan insists that even after the Nov. 9 signing of a trilateral cease-fire, mercenaries have not left Nagorno-Karabakh.

She said the vast majority of what she called “foreign terrorist fighters" remained deployed.

The spokeswoman said fighters from Syria may be settling in the former war zone, saying Turkey keeps facilitating the transfer of such fighters from Syria to Azerbaijan and that they "come with their families to receive extensive lands which have been ethnically cleansed from their indigenous Armenian population.”

This is not the first time Ankara has been accused of engaging in demographic re-engineering. Turkey's invasion of northern Syria has been cast in part as an attempt to create a buffer zone along its borders populated by Sunni Arab refugees. This area includes towns that had a sizable Armenian presence such as Hasakah, Qamishli and Malikiyah. It was one of the most culturally and religiously diverse regions in the Middle East.

Haycan Melkonyan, the commander of a battalion with a strong ethnic Armenian component that is part of the Kurdish-led and US-backed Syrian Democratic Forces, said the Turkish-backed Syrian National Army poses a threat in northern Syria. His Martyr Nubar Ozanyan Battalion is made up of 100 ethnic Armenian volunteers and is based in the city of Tal Tamr. He said many of the volunteers are descendants of Armenians who had been subjected to forced assimilation in Arab or Kurdish areas.

“To be a descendant of Armenians is the main characteristic to be accepted in the battalion. The language and the religion doesn’t matter, this is the result of the genocide, today in the battalion we have Kurdish, Arabic and Armenian speakers. Some are Christian and some are Muslim,” he told Al-Monitor in an email.

“The main goal is to organize the Armenian from here, to defend their land, their culture, language and their history against fascist forces” such as the Islamic State or the Syrian National Army, he added.

Asked if he believes Armenians who fled from the Turkish invasion in the north will ever return, Melkonyan said he is doubtful. If members of the Armenian diaspora do return to Syria, or at the very least maintain ties with their roots, it will likely be in cities such as Aleppo. Even there the return to stability with government control hasn't brought much in the way of peace dividends.

The United States continues to impose devastating sanctions on Syria and the country is all but cut off from the type of large reconstruction funds needed to restore the once vibrant city. The fighting in Aleppo stopped in 2016, yet it’s clear the country’s dire economic condition and political instability will keep away members of the Armenian diaspora who fled mostly to countries such as the United States, Canada and Armenia.

“The main difficulty for the Syrian-Armenian community in the current situation is the economic crisis caused by the blockade of the country by the West, as well as the jobs destroyed and looted, and the migration of labor as a result of the war. Community members, like the rest of the Syrian people, have difficulty meeting their basic needs,” Boghigian said.

“Every family has someone outside who helps them financially; otherwise it's impossible to live in such circumstances,” she said.

“The economy is a hard pill to swallow after all we went through. But we are swallowing it,” Bulbulian said. She is participating in a UN workshop to try to obtain funds to turn the story of one of her children's books into an app game. She is in contact with a Chinese company about the idea.

There are other signs of the rejuvenation of Aleppo’s old dynamism. The old souk is being restored and residents told Al-Monitor that the government has rebuilt the damaged homes of those who remained in the city. A symbol of the Armenian community’s lasting roots was the reconstruction of the Forty Martyrs Cathedral in 2019 after it suffered extensive damage in the war.

Kheshvajian said her young students at the Karen Jeppe Armenian College don’t have plans to emigrate, “They intend to stay to build their country because they, too, love their homeland.”